Cosmopolitan's S.C. Bachelor of the Year 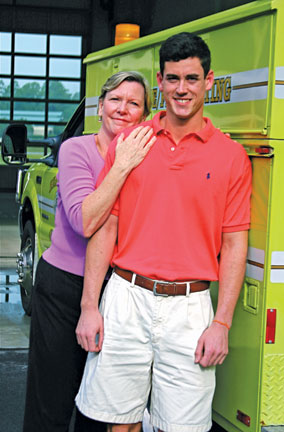 The old adage says, "Mother knows best." In Benjamin Neil's case, this antiquated clichÈ definitely holds true. Meet Karen Neil, the mother of three 20-somethings, who is still looking out for their best interests. While her oldest daughter, Suzanne, is blazing a trail of success on her own; and her youngest son, Tim, has always been a gregarious spark of fire; Benjamin, age 22, her middle child, has always been quiet and unassuming. He is the one who has decided not to go to college yet. The one who gently stoked his gruff grandfather's heart when he announced he wanted to follow in both his grandfather's and father's, Rob Neil, footsteps to be a third generation firefighter and paramedic. Currently, he is an Emergency Medical Technician at the Hilton Head Hospital Emergency Room.

One day while Karen was working out at the gym, in order to keep her mind off the monotony of the treadmill, she picked up a Cosmopolitan Magazine lying nearby. "I never read Cosmo. I think it was meant to be," explained Karen, a 30-year career nurse, who has such a gentle spirit. While flipping through the pages, she saw an advertisement for Cosmo Bachelor of the Year, touting a $10,000 prize. "I have watched Ben grow and get older. I admire his looks, the way he works out, and how he takes care of himself. I figured, what's the harm? You never know if you don't put yourself out there," Karen grinned in a loving, slightly sneaky way, as she looked over towards Benjamin. You guessed it. Karen, with Rob as her cohort, entered Benjamin into Cosmo's Bachelor contest without him even knowing! They told him after the pictures were well on their way to New York City.

While on a family visit to California, Benjamin kept getting calls on his cell phone with an unusual area code. He didn't answer, thinking it was some kind of telemarketing. Finally, they realized it was a New York area code and Karen instructed him to answer if they called back, because it could be Cosmopolitan calling. Sure enough, the phone did ring and it was Cosmopolitan informing Benjamin that he had won Bachelor for the state of South Carolina. Only one guy was chosen from each state.

Enter the beginning of a life-changing experience. Up until this point the most exciting thing Benjamin had ever done was deliver a baby in the parking lot of the hospital. While definitely thrilling, it was far different than getting on a plane, arriving in New York City for the first time, reporting to the headquarters of Cosmopolitan Magazine, hanging in the Hamptons for a photo shoot with world-class photographers, and being doted over by fashion and hair stylists-a far cry from life in the E.R.

"It's funny how life works. This experience has been more than I could have hoped for," Benjamin said.

"It's been humbling. I never thought I was attractive." But apparently someone did, and that's how he landed on the pages of the October 2011 Cosmo as one of the top 50 bachelors across America. Karen chimed in, telling me that the bachelor that won two years ago now has his own television show. And last year's winner was on "The Bachelor" this year.

Benjamin, Karen, and Rob were so enjoyable to chat with. I wasn't surprised when Benjamin told me he never thought of himself as attractive. At that point, I consciously sat back, took a long look at him, and knew exactly what made him so darn good looking. Physically, it is his long eyelashes, and the distinguished parenthetical lines that frame his mouth, strengthen his jaw, and only come into view when he smiles-and oh, does he have a wonderful smile. But it was more than that: Ben was kind; he was truly humble, and he seemed a little unaffected by it all, except for being grateful. All the cockiness one would expect was refreshingly missing.

At the end of October, Benjamin was once again flown to New York, this time with a schedule filled with a "Today Show" appearance, parties, and over-the-top star treatment. While he wasn't the $10,000 winner, this experience has put him on the map, and who knows where it may lead. He has already had appointments at three modeling agencies, with a callback from Ford. "One of the best experiences has been getting to know the other guys. I have made so many friends. The other thing is the support I've received from all my friends and the community. Hilton Head is a great place to be from!"

"I'm just so proud of him," said Rob, "and I tell you what; talking to him when he was in New York was like talking to a kid who was ten years more mature than when he left. This has been so good for him. He has really come out of his shell and is more a man about town."

Good things happen to good people.even if Mom is the catalyst. And she's right, people never know what will happen until they put themselves out there and try. "I've always been a pretty good guy who gets along with everyone. I have great friends. I didn't know what I was going to do. Something was bound to happen. [Maybe] it will take off from here...and I'm going to do something with it." You know what Ben? You already have!