On a Mission Driven By Angels 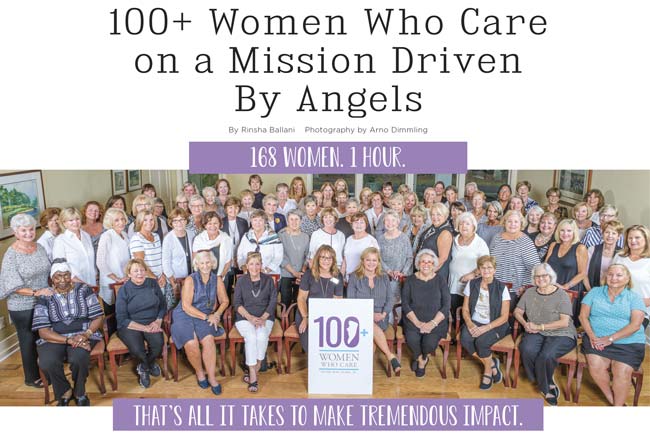 168 Women. 1 hour.
That’s all it takes to make tremendous impact.

When you hear the phrase “tremendous impact,” what comes to mind? Making an impact means bettering our community and usually involves a hefty amount of dedicated time and effort. Being busy people living fast-paced lives, we are often challenged to add philanthropy to our already overflowing schedules.

Simplicity is the key to success, and it is the foundation of 100+ Women Who Care. Four times a year, more than one hundred women get together for a one-hour meeting, where impact meets efficiency. Five local 501(c)3 charity names, which have been nominated by members in good standing, are put into balloons that are then blown up. Three are popped at random. Either the member who nominated that charity, or a representative from the charity, then bids their case to the group. It’s a simple, timed, five-minute presentation, followed by five minutes of questions and answers, and then a ballot vote. The whole process takes under an hour.

The entire creation of this group was “angel driven,” said Jackie. In January 2015, she read about the inception of the Beaufort Chapter of this national organization. Intrigued by the idea, she tore off the page and tucked it into her calendar. Little did she realize how it would manifest when her friend Ann Tucker showed up on her doorstep, asking her to partner on a project. “When Ann said it was called 100 Women Who Care, I said, ‘Don’t say another word. Don’t even move!’ and I showed her the page. We called it our angel project.”

The first meeting was held July 19, 2015 at the Dolphin Head Golf Club. Within the excitement between the two women, there was also fear that nobody would come. However, they stayed optimistic—one charity on the island was receiving at least $200. Again, it was angel driven that 32 women walked into the room that night, turning a dream into reality. The first $3,400 was awarded to Neighborhood Outreach Connection (NOC), a community development organization working to eradicate poverty by empowering people to be self-reliant. NOC was in need of laptops and other technology for their education program, to support children in underserved neighborhoods in succeeding academically. In speaking to founder Dr. Narendra Sharma, it was easy to see the lasting impact of that donation. “We could not do this without them,” he said.

Over the four short years since the group’s creation, they have gifted more than $200,000 to charities, including Hospice Care of the Lowcountry, The Gullah Museum of Hilton Head, Memory Matters, the Ella C. White Memorial Scholarship Foundation, and this quarter, Special Olympics.

“The opportunity of collective giving is so much more than the amount of money given, it’s what that money can do,” said Kim Capin, who serves as co-chair of the group, along with Darlene Schuetz. Rather than gifting the donation to a general fund, 100+ Women Who Care only contribute the money to a designated project or area. This allows tangible results to be seen, which is presented by the recipients to the group at subsequent meetings to share the progress that has been made.

When asked which experience really left an impact on their hearts, Kim shared about when the group contributed $17,100 to The Family Weekend Food Project run by The Children’s Center, along with The Deep Well Project. The project works to provide healthy weekend meals and snacks for families that are working hard to improve their situation. “We were able to fund six months of food to these families,” said Kim. “It’s such an impact for these people that you can’t help but be thrilled for them. That’s the whole point. Women can make a great impact by just showing up for one hour.”

100+ Women Who Care is currently at 168 members and has no intention of stopping. “If we reach 500, these organizations will be awarded a lottery!” exclaimed Darlene. “For younger women, it’s a great way to get involved in charity, giving and learning what is out there in our community. Women who grew up here share with me that this is their way of giving back to the community that raised them. This community deserves this.”

If you are interested in finding out more about 100+ Women Who Care in Hilton Head,
or in joining these women in making an impact, visit their website at www.100wwchhi.org.