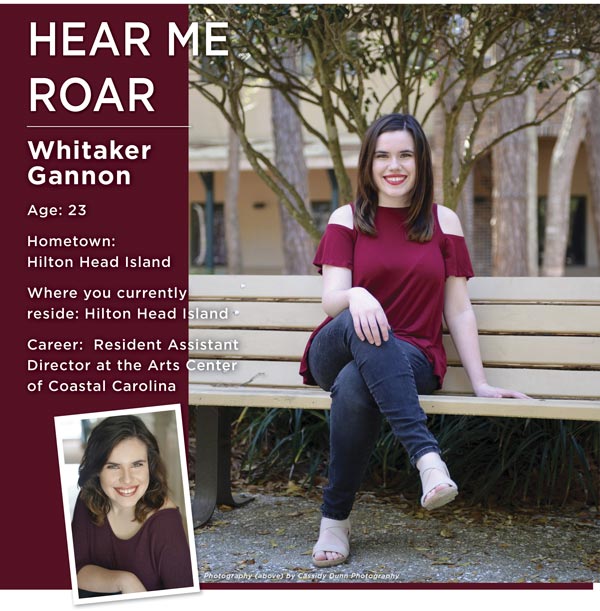 How long have you been in showbiz, and how did you get into it?
Well, if you count tip-toeing across the stage as a “snowflake” in the Nutcracker ballet at the age of 3, it’s been quite a long time! I’ve been a loud-and-proud extrovert for as long as I can remember, so naturally my parents quickly realized that performing was a good outlet for me to put all that energy into as a kid. I’d say my official induction into “showbiz” was when I was in 5th grade. I auditioned for one of the professional productions at the Arts Center of Coastal Carolina (Arts Center) and was lucky enough to get the part. After that, I continued to audition for their shows all through middle and high school, and by the time I graduated, I had been in six equity productions at the Arts Center. Now at 23, I’m still pursuing theatre on a professional level, and I’m back at the theater that started it all, which is a cool full-circle moment.

What was your first role in the spotlight?
My first big role that was spotlight-worthy was Gavroche from Les Miserables. This character was unlike anything I had portrayed before: a feisty, young boy, living in the slums of France in the early 1800s, who fearlessly decides to join the revolution. Not only did my 10-year-old self have to embody a different gender, I also had to master several solos and a huge death scene, all while working alongside unbelievably talented New York actors ... no pressure! Ha!

What are your top 3 favorite…
...Shows you’ve performed? 1) The Who’s Tommy: This Arts Center musical was just a blast to be in because it felt like one giant rock concert from start to finish. Plus, I got to do a lot of thrilling physical stunts in this show: run across people’s backs, get rolled around in a trashcan, etc. 2) Thoroughly Modern Millie: I did this show, directed by Peggy Trecker White, my senior year of high school. It was empowering to play a character that was so bold and sure of herself, and I was able to carry some of that confidence into my real life. 3) Caucasian Chalk Circle: This highly-stylized Bertolt Bretcht play was by far one of the most challenging, yet rewarding, artistic projects I’ve worked on. In a lot of his plays, Brecht would write lyrics for songs but leave the melodies unwritten. So in this Wake Forest University production, where I attended college, I composed over 20 songs for the show alongside four other students, then performed them, too.

...Shows you’ve seen? Us/Them at the National Theatre (London): My vote for the most underrated play out there. This is a must see! Hadestown at the Walter Kerr Theatre (Broadway): Not only is this a spectacular piece of theatre, this was the last theatre production I saw before Broadway shut down last year. Midsummer Night’s Dream at the Young Vic (London): This production was a dark, eerie reimagination of the Shakespearian play. The entire set was covered in mud!

...Songs you can belt? “Lady of the Underground” from Hadestown; “Life of the Party” from Wild Party; and “I Didn’t Plan It” from Waitress.

One moment in your career you’ll never forget?
I was in the ensemble of 42nd Street at the Arts Center, which is a brassy musical with a ton of tap dancing. At the time, I had very minimal tap dance experience, but for some reason the choreographer saw potential in me and decided to put me in every group dance number. I spent all of my off time drilling these tap combinations; sometimes I’d even practice the footwork underneath my desk in class. There was one dance that was especially tricky, so for the first few performances I had to fake some steps here and there because I couldn’t quite nail it. Finally something clicked, and I did the combo without missing a single step! But what really made this moment special was that right after I completed it, I could see out of the corner of my eye a handful of my cast-mates slightly waving and cheering me on from the wings. Seeing their genuine excitement for my success meant, and still means, a lot to me.

You have recently gotten into directing, tell us how you got here.
I caught the directing bug while studying abroad in London and saw the play Us/Them by Carly Wijs; I am truly not exaggerating when I say it changed my life. The performance shook every preconceived notion I had about what theatre was and could be. When I came back to campus and told my professor and mentor, Cindy Gendrich, about how someone had to direct this show at Wake, she convinced me to take a directing class, apply for the student directing position and take on the challenge myself. Directing this show helped me realize as much as I love performing, directing is what I am meant to be doing. After graduation I applied for an apprentice position at the Arts Center to serve as an assistant to the director for the production of Legally Blonde. The Arts Center then offered me a full-time job as resident assistant director for all the shows of the season. Red is the first Arts Center show I’ll be directing, and I am beyond grateful.

Directing Red, the Tony award winning play about Mark Rothko, with a limited run at the Arts Center April 8-11, makes you the youngest director ever at the Arts Center. What are you most excited about?
I’m most enthusiastic about the chance to work on a play as powerful and provocative as Red. This show is an electrifying portrait of master abstract expressionist Mark Rothko, one of the greatest artists of the 20th century. It explores not only Rothko’s impressive body of work, but also the fascinating intricacies of his psyche. You also get to witness the dynamic relationship between Rothko and his young new assistant Ken as they work on a series of murals in a New York art studio. These two painters are born not only of different generations, but also of different artistic perspectives. Just as Rothko’s paintings are about tension between blocks of color, the play itself is about opposing views of art. Over time, Ken gains the confidence to challenge Rothko, moving from obedient apprentice to articulate opponent. I don’t want to say too much, but trust me, there is a reason this brilliantly-written play won six Tony Awards in 2010!

How do you “take 5” from work? I try to find creative outlets outside of my work hours so I can enjoy making art on my own deadlines, without the pressure of a paycheck. Since the pandemic began, my mom and I teamed up and entered a few international screenwriting competitions! We had never written a screenplay before, but since we are both creative writers, fast learners and film lovers, we learned the formatting rules and dove right in. It was the best decision of 2020 without a doubt, and we are currently in the final round of one of the competitions as we speak! Wish us luck.

What’s the best lesson you’ve learned being in the biz? How do you use it in your new directing position?
Collaboration is crucial! There’s a misconception that a director walks in knowing all the answers about how to approach a piece and then dictates those decisions to everyone in the room. While a director needs to come into the project with a robust knowledge of the play, (i.e. the contexts surrounding and nuances within the story itself) discovering the answers with the other artists in the process allows the production to really become one cohesive artwork—that’s when the magic happens!

What are you currently ROARING about?
Artists and art are essential! It’s easy to overlook its significance in our culture and lives. It might seem hyperbolic, but art truly can foster empathy, shift societal norms, generate enlightening dialogues, provide an escape and empower the oppressed. We need to use art as a tool for change now more than ever. The pandemic has impacted all small businesses, but the art world—especially live entertainment—is still facing tremendous obstacles before fully returning to any semblance of normalcy. Please continue to uplift and support artists in any way you can.