The World is Her Oyster 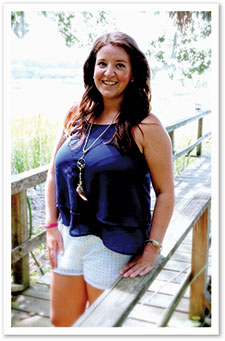 For adventurous and courageous Wallis Singleton everything is possible. She just graduated in May 2015 from Technical College of the Lowcountry, Beaufort with a degree in nursing. She also holds a Bachelor of Arts in Public Health from University of South Carolina, Columbia. Before formally launching her nursing career, Wallis decided to expand her horizons in a developing country and participate in their health care programs. She learned from a friend about Work the World, an organization based in the United Kingdom, that offers overseas elective experiences for students in healthcare fields. She was eager to experience living and working in Africa to learn how healthcare is provided there.

Just weeks after graduation, Wallis traveled—by herself—to Arusha, Tanzania.  The sponsor company’s driver met her at the airport.  She had no idea what to expect on the hour-long journey to her residence. They drove through small towns, interspersed with huge fields of mammoth sunflowers and lush vegetation. When she arrived in Arusha she saw beautiful upscale hotels, which cater to travelers going on safari, restaurants and little shops along the streets, bursting with merchandise. There were street vendors selling all kinds of handmade items, such as paintings, carvings and scarves. She also noted several older, somewhat dilapidated, multi-story buildings. There was only one streetlight. The traffic was hectic, chaotic and a little scary. Upon arrival at the lodge, Wallis was introduced to fellow health care professionals from England, Ireland, Australia and Pennsylvania who would be her house mates for the next four weeks. She was bursting with excitement; her adventures were about to begin!

For the first two weeks, Wallis was assigned to the pediatric wing of the local hospital. She worked alongside the hospital nurses. She followed the doctors on clinical rounds. After the doctors evaluated each patient, they described symptoms to the nurses in English and invite them to offer their ideas about appropriate treatment options. There were no toys or televisions in this hospital. Wallis’ fondest memories were blowing bubbles with the children, and sharing with them the stickers, crayons and coloring sheets that she brought from home. The children and their families were so appreciative. One little boy gifted back to Wallis a picture he had just colored. She will treasure it forever.

Wallis’ next two-week assignment in a men’s ward was also eye opening. Noting the level of care afforded to patients in Tanzania, in contrast to what is available in the United States, she was amazed to see that people actually were able to get better and return home.  Most people have to travel great distances to get medical care, and, with transportation being a challenge, many patients have illnesses in much more advanced stages than Wallis was used to seeing. “I went to Arusha with the intention of providing medical assistance, but after the second week, I realized that this trip was more about a cultural learning experience,” she said.

Wallis got to visit Paradiso orphanage. She and her colleagues stopped at a local store to purchase food and lollipops for the children. A former minister and his wife, who rescued street children, started the orphanage several years ago in hopes of serving more children. They began with nine and are now serving 24. The children are smart and have big dreams. They attend school. One wants to be an accountant. Wallis would love to volunteer there someday to help them with their education goals: “This was the greatest learning experience of my life! I wish everyone could have this opportunity. It is such an eye opener. There’s nothing like a third world experience to see how privileged we are for the health care that we are given, for our schools, for everything. I will never take anything for granted again!”

A few days were set aside for sightseeing trips. Wallis and her friends got to hike Mount Meru, visit the Ngorongoro crater, swim in secluded hot springs, and go on a three-day jungle safari. She returned home with a treasure trove of precious memories and photos she will cherish forever.

On July 27, 2015 Wallis Singleton officially began her career as a Registered Nurse at Beaufort Memorial Hospital. She is assigned to the medical – surgical, joint replacement unit. As she steps into this new chapter of her life, she is excited about the challenges, adventures and possibilities that await her. She will go far. We wish her the best!

Grateful for: Her parents. Wrote them this email, “So blessed to have been given everything I have in life and to get me where I am.”

For fun: Being outside and hiking with Nala, her 6-year-old black lab rescue dog. 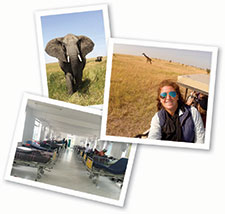 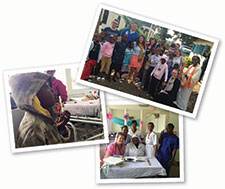