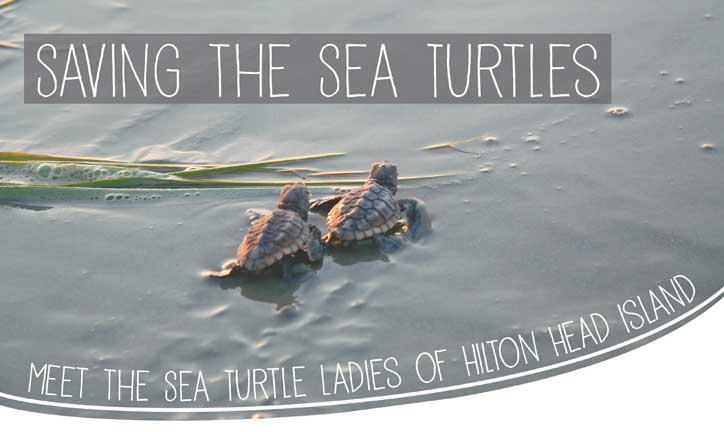 Sea turtles are fascinating. This time last week, I would have thought differently. Despite their abundance around the beaches where I grew up. I knew little, if anything, about them, and had no immediate plan on changing that. But after talking with Amber Kuehn of the Hilton Head Island Sea Turtle Protection Project, I learned of their beauty, their struggle to survive, and why we, as tourists and Lowcountry residents, should care.

It's immediately clear that Amber is a sea turtle expert and devotee. She has worked with them for the past 15 years-whether studying for a master's degree in Marine Biology at Nova Southeastern University in Ft. Lauderdale or doing fieldwork in Maui. She's been a part of the Protection Project for the last seven years, and is currently the project manager. Every morning, from May to October, she and her team are on the beach by 5 A.M. They patrol the 14 miles of coastline on their John Deere and search for tracks leading to "body pits", or nests. Once they find one (the most they've found in one night is nine) they mark the location, date the nest was laid, and gestational stage for statistical purposes, and move them closer towards the dunes, if necessary. From each nest, they take one egg, and the shell and yolk go to genetic researchers at universities such as the University of Georgia, who monitor mother turtles and their nesting habits. Last year, the all-female crew found a total of 320 nests, but since a turtle typically lays four to six clutches per season, the average came out to about 80 turtles. The genetics study revealed that 136 individual females nested on the island in 2012. The ultimate goal of the group, she says, is to "do as much conservation as we can, educate the public and collect data."

Despite their local presence, there is a lack of knowledge surrounding the plight of the Loggerhead sea turtle. They can weigh up to 400 pounds, with distinctive tracks you may see if you are lucky enough, before the tide washes them away. They are lumbering on land, having to pull themselves around by what would be their elbows, but in the sea, they are fluid and graceful. Amber recalls watching one glide right over her head while scuba diving, comparing it to a "flying saucer," and says that's when she first fell in love with them. Loggerheads may visit our island nightly in the summer, but it's still rare to see one. They nest at night because they are cold-blooded and must avoid overheating. Even in her many years of hands-on research, Amber has only seen 10 turtles nesting and five "emergences," or hatchlings, making their way to the sea. They are gorgeous creatures, but don't live easy lives due in part to human activity. If they do hatch and make it to the water, Loggerheads must swim 70 miles to the Gulf Stream, which will then carry them to a specific area in the Azores Archipelago, 930 miles west of Lisbon, Portugal. Here, they'll find a favorable location to mature for 10-12 years, nestled on a floating mass of lush seaweed, before returning to the region of their birth, where they will forage and eventually nest. This voyage seems challenging enough, but we as humans are putting more and more obstacles in their way.

For one, our lights confuse them. As they hatch in the dark, their instinct is to follow the light of the moon, which reflects on the water. But beachfront house lights and lamps mislead them, so it is actually an ordinance that beachfront lights must be turned off between 10 P.M. and 6 A.M. from May to October. Another obvious danger is litter-it can be accidentally ingested or entangle the turtles. Loggerheads feed almost exclusively on jellyfish, and how are they to know the difference between their lunch and a plastic grocery bag billowing in the water? Some less blatant hazards include falling in to unfilled holes dug at the beach, and accidently getting hit by boat propellers. Believe it or not, even poaching is still a threat, with 2012 being the first year that there were no incidents. If you're fired up now, Kuehn says the best way to help is to "educate yourselves so that you may educate others".

So, what keeps Kuehn and her seven teammates driven? Kuehn's favorite part is "telling somebody about it who's as interested in it as I am." There were a wide variety of responses from the other members, revealing the many facets and passions of the job. "I think it's a blessing to live in an area where we actually have something like this, that we can work on and protect," said Leigh West. Carol Rivers likes to "answer the questions of the public, and to see them become so interested, where previously, they didn't understand." She can count me among all the converts! She continued, saying, "I'm a naturalist, and my best thing is just being out here, on the beach in the morning, watching the sun rise and helping the turtles." "My favorite part is the anticipation of every patrol, where you never really know what's going to happen...you come up to that track and it's extremely exciting," Caroline Huber explains. Jayme Lopko proves the unpredictability of the job, recalling that "My second day on patrol, we had a turtle end up in a subdivision...almost on North Forest Beach Drive! It took five men to pick her up." I now find it easy to understand the draw to this rewarding job.

My eyes have been opened to something beautiful and important that has been there all along. The sea turtle ladies of Hilton Head Island are making a difference in our environment everyday. AFter all, every large accomplishment is just a series of smaller achievements. So together, by changing our ways, gaining knowledge and spreading the word, we can all make a difference for the threatened sea turtles. 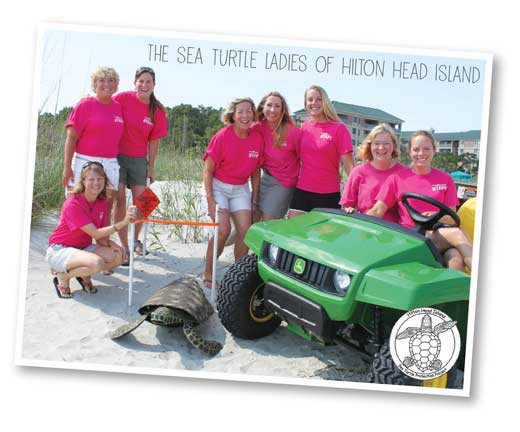