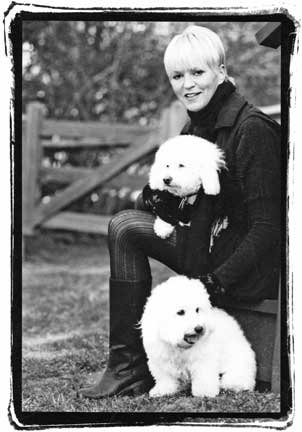 Chances are you recognize the striking face and tall, toned physique of Teri MacPhail-Bowes from the Palmettoes print ads, seen often in the pages of Pink magazine, and elsewhere. Stylish even when she's not in front of the camera, Teri comes by her fashion sense naturally.

"When I was a little girl, I remember watching my mother get ready for work in her business suits, dressed just so, and looking fabulous," reminisces Teri. "She still looks young and fashionable today, whether in jeans or dressed up."

An appreciation of fashion was instilled at an early age for Teri, even while growing up on a farm surrounded by animals and nature in Greensburg, Pennsylvania..far from the runways of New York and Milan, with her own mother serving as the most powerful fashion influence of all.

In the late 70's, Teri studied fashion merchandising and did some modeling, a natural fit for her lithe, 5 foot, 8 inch frame. She also attended the Pennsylvania Beauty Academy, receiving a cosmetology license. For years following she worked in the fashion industry in Pennsylvania, while volunteering with charities and hospitals as well.

In 1993, Teri made her way down south and bought a charming home in Sea Pines, becoming a part-time resident. That move became more permanent when she made Hilton Head her home in 2000.

In 2003, Wade Jefferson, a good friend whom many knew, encouraged Teri to drop by his boat in Harbour Town, and to bring a few friends. That's when Teri met Jerry Bowes. "The chemistry was definitely there from the first meeting," she recalls. "As we chatted at Wade's impromptu party we discovered how much we had in common. I'm from just outside Pittsburgh, and Jerry is from Philadelphia, with both of our families still in Pennsylvania. Small world..here we meet on Hilton Head!" In October '06, the two were married.

Teri lives life full-throttle, with friends above and below the Mason Dixon, and plenty of activities from yoga to running, and boating to biking. Jerry has four grown children from another marriage, and seven grandchildren (six teenage girls and one teenage boy). The teens call Teri "grandma," even though she doesn't resemble the moniker's stereotype in the slightest.

One of Teri's passions is motorcycle riding, and she keeps a bike in Pennsylvania. When up north, she often rides her motorcycle to the girls' field hockey games. Their friends ask, "Who's that on the motorcycle?" and the response is, wryly, "oh, that's my grandma!" You can easily imagine that exchange, as Teri takes off her helmet to reveal chicly cropped blonde hair, and a figure an 18-year old would envy. In a movie, that scene would most certainly be in slow motion!

Teri loves to treat the girls to shopping adventures, and they delight in her fashion sense as well.

The Bowes have two residences up north as well - one in Greensburg, PA and the other in Downington, PA. The duo owns a charming restaurant in Downingtown, called Firecreek, in what used to be a former papermill, which just opened last April to rave reviews. Also Jerry travels back often to work at his company, Penn Distributors, distributing Anheiser-Busch and In-Bev products. "Yes, there's always beer in the house," laughs Teri.

Needless to say, the couple gets to see their families frequently. And, with their own RV, traveling can be done accompanied by their two canine-children, Angelo, a Bolognese, and Chessie, a Bichon Frise.

There is a balance in Teri's life - she adores fashion, but revels in being outside and active. She eats healthily, but relishes baking sinful treats from scratch and delivering them to friends. Occasionally, one of the recipients comments on the irony that she delivers these homemade cupcakes and cookies in her running clothes!

Living life beautifully - and making it seem effortless - is one of Teri's gifts.that, and her personal motto, which shines through as brightly as her smile: "be kinder than necessary because everyone you meet is fighting some kind of battle."  Certainly, words to live by.