You Can Go Your Own Way

Story and Photography by 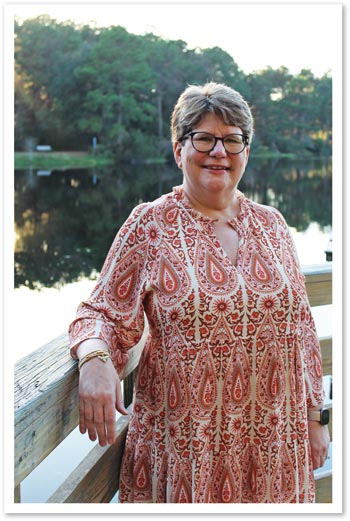 1993: Teresa McCarty. Female, mid 20s, married, two little ones, a dead-end job, bills to pay, mouths to feed and no backup plan. All she could muster up were prayers and hope. Something that felt like such an impossible mess of events, turned into one of the biggest blessings in Teresa’s life.

Teresa, now an almost 30-year resident of Hilton Head Island, has thrived more than ever, but it wasn’t an easy beginning. Originating from West Virginia, she was in a dead-end job with no hope for upward mobility. While Teresa was contemplating her options for work, her husband was let go due to a company shutdown. Raising a four-year-old and a 6-month-old, this was not the direction the McCartys wanted to go. With the weight of the world on her shoulders and her faith in God in her heart, Teresa prayed and prayed, “Wherever, whenever, whatever. Please God, I’m ready.”

After a quick dig through the trash, Teresa’s employer helped her find a faxed-over job opportunity in South Carolina, an option that seemed far-fetched. However, the very next Sunday she was on a plane bound for Hilton Head Island, was interviewed for the job on Monday and got a call on Tuesday with a huge congratulations. Dreams were coming true. Ends would be more than met. That weight was lifted. In addition to Teresa landing her dream job with all the benefits her family needed, her husband interviewed, and out of 300 people, scored a job, too. Things were looking up.

A jump, a leap and a snowstorm, Teresa’s family finally made it. Originally moving into Marshside Apartments on Hilton Head, things were getting exciting for the McCartys. Figuring things out about her job wasn’t as hard as figuring out their new location.
She didn’t just “start fresh” with this adventure, she started over. One of Teresa’s biggest challenges was having to balance motherhood with becoming the successful business woman she is today. “My kids were so young when we moved down here, my hardest challenge was letting others take care of them. Back in West Virginia, we had so much family, and down here, we were strangers,” Teresa said.

But as the days went on, the Island seemed to get smaller and smaller. Friends were becoming natural, trust grew and the Island began to feel like home. Both her children are grown now and are having their own fresh starts, as well. Her daughter Amie is married and has two beautiful daughters who call Teresa “Gee,” which is her honored grandma name. Her son, Will, is engaged and is getting married this month! Since moving to Hilton Head, Teresa and her husband have built two houses and currently live in the last one they built.

Teresa had never felt like she had her true calling in the working world until moving to South Carolina. Working with Merrill Lynch for 12 years and in the wealth management business over 26 years, she has found her niche. As the company grew, so did her knowledge. Taken under the wings of many mentors, Teresa earned her license in financial planning, learned the business and has never looked back.

“This job started part-time because of the kids and then went full-time as they got older. I never went back to college because I was soaking up all the knowledge I needed to succeed in this job, and I was loving it,” Teresa said. In time, she became a regional manager of four branches.

Without her and her husband’s determination to find a better life, this fresh start and the courage to take the opportunity, Teresa could never have found what she loved to do, or the place she loves the most. Transitions are hard on everyone, but Teresa found the way to muster all of that hope and those prayers, too, and took the leap of faith into her future to find her delightful destiny.

Up Close:
The Snowstorm: In the middle of moving to HHI, the Great Blizzard of ‘93 was a large cyclonic storm covering most of West Virginia, not helping to ease the moving process.

Her Hobbies: Teresa adores spending time with her grandkids. She is also an avid reader, used to be a huge scrapbooker and very recently, she is quite the wedding planner.

#MarriedLife: She and her husband have been married for 37 years and counting. “It isn’t always easy, but it is always worth it,” Teresa smiled.