Sharing the Gift of Music 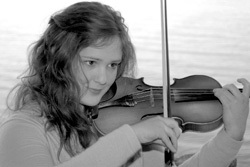 Grace Salzer started playing the piano at age seven. She liked music but never knew how much fun it could be until she discovered the popular tunes of two generations ago.

"I used to have a really strict piano teacher," said Grace, a 16-year-old sophomore at Beaufort Academy. "But then I found this older lady in Beaufort and she taught me to play all the really fun music from when she was young, like big band and jazz. That's how I really learned to love piano music."

As she was soon to discover, her affinity to this time period went beyond just the music to the people themselves. Folks that were Grace's grandparents' age became some of her most cherished companions when she started volunteering at the nursing home.

"I would play the piano for them and they would sit in their chairs and shuffle their feet," she remembers. "They would give me their old hymnals or sheet music that they couldn't play anymore. Sometimes they would mistake me for their granddaughter."

The elderly have an obvious fondness for Grace, one she sincerely reciprocates. She appreciates their perspective and sense of humor, and she enjoys hearing about their life experiences. "I cling to old people," admits Grace.

Later, after she had taken up the violin, Grace would sometimes bring this instrument to the nursing home.

"There was one lady who always wanted me to play Silent Night, even in the middle of summer," said Grace. "I used to play it for her on the piano in the rec room, until one day she couldn't leave her bed anymore. So I went to her room and played Silent Night on the violin, and about a week after that she died. She was my favorite."

Grace started playing the violin four years ago after watching a music video by bluegrass band, Nickel Creek, in which a female band member rocks out on the electric fiddle. Besides just liking the sound, Grace thought the girl looked so cool that she became determined to be like her. Since then, she has also taken up the guitar, banjo and mandolin, as well as singing and songwriting. Some of the original tunes she has composed are Anxiety, written after suffering the disappointment of not getting the part she wanted in an audition, and Hobo, about a man who is so full of self-pity that he sees opportunities, but doesn't go for them. Like most musicians, she uses her writing to express herself and work through everyday feelings and emotions.

"Some of the songs I write secretly for some guy, and I'll never share them with anyone," she says. "Others I write when I'm frustrated or bored. It's kind of hard to write anything when you're happy."

Perhaps one of the highlights of her young music career was when she accompanied a friend who rings the Salvation Army Bell outside of the Publix in Beaufort. Grace brought along her fiddle and played Christmas carols, and soon they were pulling in a record amount of donations-hundreds of dollars an hour.

"Music is my hobby, I don't want to do it professionally," Grace insists. "I want to use it for other people's enjoyment."

Up Close:
Hometown: Beaufort Hobbies: crafts such as embroidery, decoupage and jewelry-making; video games Favorite subject: algebra
Other musical activities: member of Hilton Head Choral Society, 1st violinist for the Hilton Head Youth Orchestra, and current leader of Elite Strings, an ensemble that plays at parties Inspirational figure: "My dad because he is from New Orleans and he grew up dirt poor, the oldest of six kids. There was pretty much no chance of him getting to where he is today, but now he's an orthopedic surgeon." Formative experience: attending the Interlochen Arts Academy summer camp in MI
Favorite music to listen to: 80's music and indie/alternative bands such as Spoon, Dashboard Confessional and Ben Folds