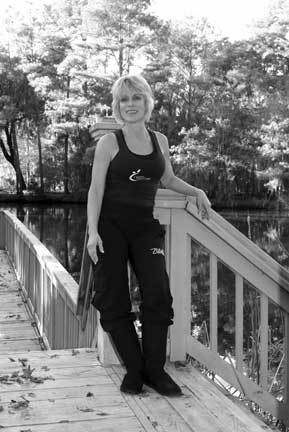 Many know the uber-fitness guru Suzette Springer through the exercise classes she teaches around the Lowcountry: pilates, boot-camp, yoga, Zumba.the list goes on. However, people may not be as familiar with her fascinating background, the part of the journey that has led her here.
When Suzette began this interview, her first words were, "I don't want this to be really about me."  I, however, armed with an inkling of her fascinating backstory, wanted to delve right into hearing more.

So after a little cajoling, Suzette shared her story. Growing up in a large household of nine, she learned a lifestyle of giving, as her parents were always willing to open the doors of their home to troubled youth.

Suzette attended a Connecticut high school that dismissed early, allowing her to take an afternoon train into Manhattan every day to attend renowned dance academy Farnworth & Hauer on Broadway and 53rd. This launched Suzette's unique stage career, and, inevitably led her to a path of self-discovery that would reveal one of her true passions - teaching.

Though she received a solid foundation in ballet, Suzette segued into jazz and theatrical dance, auditioning and "getting gigs" in the city. Part-time, she began teaching fitness classes at the ultra-chic Body Design by Gilda. Gilda Marx, an heir of the Marx Brothers, was the hottest name in fitness next to Jane Fonda. Here, Suzette discovered a passion for working with others, not just to teach exercise, but as a life-coach. The seed was planted.

Meanwhile, the siren song of the stage lured her as well. Suzette did improv at TheatreSports NYC, a world-wide freestyle repertory theater. (Think Drew Carey's "Who's Line is It Anyway.")

And during this time, Suzette met her husband, Rob Springer. The duo met twenty years ago at the On Camera Acting Studio in NYC, where Rob was the studio manager. Rob's own resume is impressive as well, having worked behind and in front of the camera, even on Saturday Night Live.

Also while in New York, Suzette expanded her repertoire to include acrobatic dance, working with Big Apple Circus and Barnum. She learned the "aerial arts" at the School of Circle Arts, adding to her theatrical resume the talents of contortion, unicycling, trapeze and tight rope walking.

Fifteen years ago, Suzette performed with Cirque du Soleil, traveling and performing worldwide, even in a vineyard in Tuscany, where special outdoor riggings were constructed. "Back then, Cirque du Soleil performed at extravagant private functions," Suzette explained. "One event was a bar mitzvah where Cirque performed and the Eagles were the band!"

So when asked how she ended up on Hilton Head following this cosmopolitan existence, hers was a familiar refrain. "My parents had a place here, and when I'd visit, the warm climate really called to me. So, we were happy to leave behind the snowstorm-filled winters up north and make Hilton Head our home."

Suzette's raison d'etre stems from helping clients. "I work with many empty nesters who have been their family's caretakers. Taking care of themselves is uncharted territory. They learn the value of physical health, which is deeply connected to their mental health as well. It is really gratifying to watch them achieve a balance through this potentially difficult time in their lives."

Still involved with a local improv group as a hobby - she knows the value of keeping the activities you love in your life - Suzette teaches fitness at several locations, including over a year with the pilates studio "Core."
Suzette has also mentored young girls as well. She is endlessly counseling and, ultimately, inspiring others. "I love to empower people to find the balance in their lives which leads to true happiness..that's what it's all about!"

Hometown: Stamford, Connecticut
Moved to Hilton Head in: 1994
Words to Live By: "Yes, live in the moment..but also, inspire in the moment."
Food She Craves: Yogurt
Fave New Fitness Trend: Suspended Pilates & Yoga
Coolest Acrobatic Trick: Hang by one foot on the
high trapeze
TV Show Not to Be Missed: Dancing with the Stars and So You Think You Can Dance
Best Time of the Year: Christmas!