A Star-Sprinkled Life and Career in Education 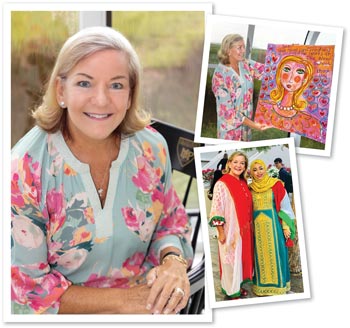 “When parents, administrators and teachers partner with students, magic happens,” said Sue Groesbeck, who enjoyed a 48-year stellar career in education. “Once I got in the classroom, I found my home…a calling, a career. It’s amazing when I look back on my life. I’m still in touch with many of my students and colleagues.”

Sue has 20 years of experience as a classroom teacher of German and French, and 28 years as an administrator. She has held three long-term head of school positions, and six interim head of school roles. She also has deep experience in girls’ schools. She was named the Whitty Ransome Educator of the Year at the National Coalition of Girls’ Schools conference at Wellesley College. This award is presented to a woman who has uniquely committed herself to the lives of other girls and women, who reflects a pure devotion to a higher cause, has the willingness to serve others and the grace and readiness to honor others.

One of the most rewarding moments in Sue’s life was standing in the Oval Office with President Bill Clinton to receive the National Education Association A+ Award for her outstanding efforts in education. She still proudly displays the picture taken with President Clinton.

Sue said that her first job as a teacher was at a public school in Rochester, NY, where she found a supportive environment with great colleagues, smart students and opportunity for professional development. “I flourished as a teacher, and I had no horror stories to tell.”

Her superintendent saw great potential in Sue and reached out to offer her the opportunity for a sabbatical in order to get a doctorate. “I’ve had a star-sprinkled life,” Sue said. “I didn’t aspire to be an administrator. I didn’t aspire to get a doctorate; I had two little girls at home. I couldn’t have done it without the sabbatical. It changed my life, and I hope I’ve paid it forward,” Sue said.

Indeed, she has. As a counselor and mentor, Sue has helped steer her students and colleagues toward success. She has also provided scholarships, written letters on behalf of her students, and she has traveled around the world asking for money for education. Sue said she loved teaching, the arts and athletics, and traveled with her students for athletic events. “I never missed a play, basketball or football game,” she stated. She has always put her students first, and if there was a tragedy in a family, she served them as a counselor or priest would.

Sue discovered Hilton Head when she became Head of School at Hilton Head Preparatory School in 2003 and served there for five years. She and Mark, her husband of 48 years, decided that Hilton Head would be their anchor—the place they wanted to be for the rest of their lives. Although Sue continued to work in other schools for several years, they kept their Sea Pines home where they now reside.

Another memorable achievement of which Sue is proud was being part of the team which raised six-million dollars to build the field house at Hilton Head Prep and named the building in honor of Joseph Fraser. She was honored by then Mayor Peeples when he designated the opening day of the Field House as Sue Groesbeck Day.

She also proudly served as Acting Head at Emma Willard School, the oldest school for girls in America, founded by suffragettes. She has been head of schools in New Jersey, Tennessee, Georgia, Vancouver, Toronto and Oman. Sue has also consulted for major testing and educational organizations including The College Board and state education departments, and she was a post-doctoral Klingenstien Fellow at Columbia University.

Sue’s experiences in education give her an international perspective, which spans cultures and continents. She received two Fulbright Grants (Germany and Japan) and was named a Toronto Woman of Distinction. She said an extraordinary experience was living in the Middle East when she worked as the Superintendent of the American British Academy in Oman, where she noted that she didn’t have to wear a head covering. She particularly enjoyed serving as a board member for the Calabar Foundation, which supports schools in South Africa.

Sue and Mark have two married daughters, two sons-in-law and three grandsons. Sue is active in the community as a member of the Women’s Association of Hilton Head Island (WAHHI), the Friendship Circle of Girl Scouts, Junior League Sustainers and on the Skidmore College Alumni Admissions Board.

Up Close:
• Sue said that an outstanding day goes like this: pajamas—bathing suit—pajamas!
• She and Mark have a lake house in the North Georgia mountains where they enjoy gardening, boating and being in the water.
• Sue loves to walk up to 4 miles a day, preferably on the beach.
• She belongs to three book clubs and loves to play pickleball.
• Sue was born in Martinsville, VA, and graduated from high school in Darien, CT, where she met her husband.