Making Waves in a Male-Dominated World 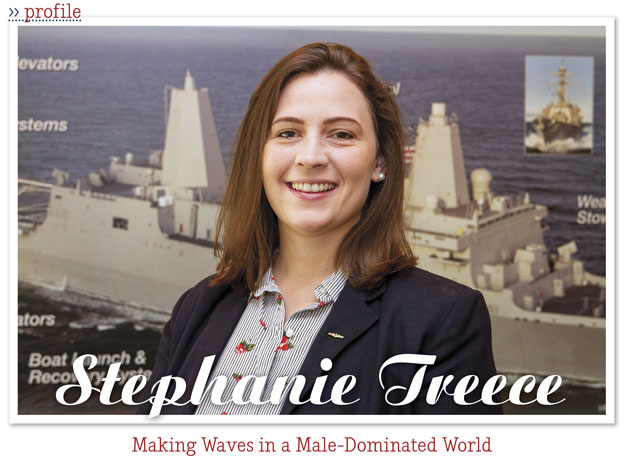 From the time Stephanie Treece was a young girl growing up in Saltsburg, a small town outside of Pittsburgh, Pa., she knew she wanted to pursue a career in the sciences. She had no idea at the time she would eventually become one of the first women to serve on a U.S. Navy submarine.

“I’ve always been pretty good at math and science. In math, there is always an answer, so I knew I would be going into a technical field,” said Stephanie, who currently oversees defense contracts as program manager with PaR Systems at the Brunswick Port. “My dad started out as an HVAC tech. He had to work a lot on weekends, so he would take me on calls to spend time together. He would take me to inner-city Pittsburgh, and we would go up into the skyscrapers, that’s where I got my love for physics,” she said, adding thanks to her father, she also learned how to install tile, drywall and fix plumbing.

Initially, Stephanie thought she would go into a space-related field. “We always had a telescope growing up. In the fifth grade, I did a project on the Hubble telescope.”

After high school, she received a full Navy scholarship to attend Penn State. “When I showed up at Penn State, I thought I’d become a helicopter pilot. By that time, my dad had moved up to working on roof air-conditioning units brought up by helicopters.” However, she changed course during her freshman year when she got to ride aboard the submarine, the USS Newport News and immediately “fell in love with submarines.” But there was a catch. At the time, the Navy did not allow women to serve on subs. “I loved the environment, the brotherhood and high standards on board. I knew that’s where I wanted to be, but I wasn’t allowed.”

While she couldn’t pursue her first choice, Stephanie didn’t give up hope and continued her studies. During her sophomore year she decided going into nuclear power offered the most opportunities and thought becoming a surface warfare officer, with a nuclear designation, would be the way to go. “I would graduate college and serve like any other Navy officer, then after two years, go to nuclear school in Charleston, S.C., then serve on an aircraft carrier to run its nuclear reactors.”

As her senior year ended, she and her high school sweetheart, Brandon, (also about to graduate from Penn) decided to marry. “When I was about to be commissioned, he said ‘let’s get married!’ As if things weren’t stressful enough,” Stephanie laughed. “We married Easter weekend, the week before finals, and he’s followed me ever since,” she added, about her civilian husband. “We did get to honeymoon later that summer in Alaska. It was wonderful.”

Stephanie said part of going through the Navy’s “nuclear pipeline,” requires attending the nuclear training program at the Navy Yard in Washington, D.C. “I had already done my two required interviews and taken an exam.”  If all went well, each candidate must be interviewed by the Admiral of the Navy.

When she went for the final interview, “I had already been accepted as a surface nuclear officer.  During my interview with the admiral I decided to go for it, mentioning to him if they ever opened submarine duty to women, I wanted my name on the list. I even asked if he would write that down on my packet and he said, ‘sure!’”

Well, the Navy did open submarine service to women later that summer and Stephanie was ecstatic. “When they offered me a ride on the Henry M. Jackson (ballistic sub), they picked me and a group of women up in Hawaii. It was great! I was like ‘sign me up!’” 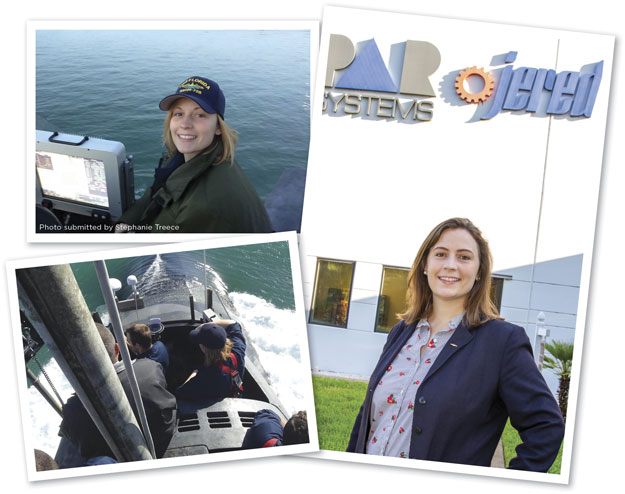 “It was challenging but I would have been just as excited to be accepted even if I had not been in the first groups. It did feel highly visual and hyper focused,” she recalled. “There were so many naysayers. I really had mixed emotions. I was so proud of myself but felt as if I had to be so careful not to mess up because it would not only reflect upon me, but on other women. It really was you’re damned if you do and damned if you don’t. If you excelled, some would say it was because you were getting preferential treatment. And if you messed up, it would be ‘oh see, women can’t handle it.’”

But handle it she and her fellow female submariners did. Stephanie went on to serve as a Navy sub officer for almost seven years, which meant moving frequently.

“You have to have that conversation with your spouse when you marry,” said Stephanie, who says her husband’s support enabled her to successfully pursue a career she loved. “Military spouses don’t get enough credit. They make a lot of sacrifices. Our deployments are sometimes three to six months at a time,” she said, adding her longest was in the Mediterranean from August 2014 to February 2015.
She said Brandon was one of the only men in the military spouses’ groups. “But my command did a wonderful job in making him feel a part of things. He was asked about how he felt about me being on a sub with 160 men on board, but he didn’t worry about it, and I didn’t worry about him. He and I have a lot of trust in our relationship.”

After serving at sea, Stephanie transferred to shore duty where she taught submarine tactics at Kings Bay Naval Station. Although Naval officers generally serve five years, her orders were extended another two years. Once those expired, Stephanie decided not to re-enlist, since she had given birth to the couple’s son, Graham.

“I saw women all the time who had to leave their children with their fathers when they deployed, but I didn’t want Brandon to care for Graham alone.”

With her service to the Navy over, the time came for the new parents to decide where they wanted to live. “All our family is still in Pennsylvania and our parents live a five-minute drive from each other. We could have moved there or anywhere. The world was our oyster. But while I was stationed at Kings Bay, Brandon found a job he really liked in Brunswick and he also loved it here. So, I told him he had to find me a log cabin if he wanted us to live here, and he came through! We have a log house not far off exit 29.”

They also found a church family, Lord of Life Lutheran on St. Simons, that they felt a part of—something important to them both and their son.  “Our religion is important to us and when something is supposed to work out, God will put the pieces together. And that’s what happened.”

While being a mother to her now four-year-old son comes first, Stephanie still wants to serve her country. “Finding a job with PaR was huge to me. We deliver products to the Navy and build warships. It’s the perfect fit.” For her first three years with PaR, Stephanie worked as a quality engineer before being promoted to program manager two years ago. “I’ve been asked how I handle the stress, but I really can’t function unless I have stress,” she said, laughing.

Currently, that stress includes working from home during the Covid-19 pandemic, but she is taking it all in stride after years of working in a male-dominated field. “When I started out in the aerospace program at Penn State, I was one of six women out of 108 students, but you get used to it.

“In the Navy, I was blessed to work with the cream of the crop—smart and educated hard workers who don’t care who you are, what religion you are, or who you sleep with. They care you do your job. You will face some roadblocks, but you can’t make excuses. Never give up the ship. Keep planning and pushing. It’s all about what you contribute, and it’s great now that women get a chance to do so in these kinds of roles.”

Education: Penn State: Bachelor of Applied Science, Aerospace, Aeronautical and Astronautical Engineering; Master of Engineering from Old Dominion University through correspondence while serving in the Navy; Nuclear Engineer Training at US Department of Energy.

Emergency at Sea: Once, while being the person in charge, Stephanie heard an emergency report no one on a sub wants to hear—Fire in the Engine Room. “The two things you don’t want to hear are ‘we’re taking on water,’ or ‘there’s a fire onboard.’ We had one (nuclear) reactor on board. You rely on everything you’ve been taught and trained for and drive the fear down. We had some damage, but thankfully got it under control.” There was a plus side as well. “It was my birthday, so we had to pull into port to repair the damage, and I got to call my husband.”

Returning to their roots: When people hear I’m from a town outside of Pittsburgh, they think I’m a city girl, but our little town is in the middle of nowhere. We refer to it as ‘Pennsyltucky. We always had gardens; Brandon and I still garden: Tomatoes, corn, peppers and bush beans.

Tech school cheerleader: My parents are blue-collar workers who both went to trade school and worked their way up. Mom started as certified nurse’s aide and became a nurse. Dad is now the VP of his company. They taught me the value of hard work.

Giving back: Stephanie volunteers visiting veterans’ homes, giving each a pin and a flag. She recently met a World War II Vet with dementia. When I mentioned his service, he remembered everything about it. It was so grounding for me to talk to him and other veterans.”