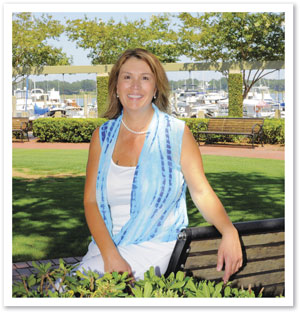 Sondra Sykes Meek’s novel, Model Marine, is something else! I downloaded it on Kindle the day before our interview, and I could not put it down. The fictional story of a young woman who enters the Marine Corps and encounters horrific combat experiences is written with such authenticity and precision. Sondra, who also joined the Marines as a teenager and also saw combat, says the novel is not autobiographical, but there are truths in the story. “The Marine Corps is my family,” she explained. “And I wanted to write a book that was accurate and passionate.”

Having been a Marine Corps brat myself, I know just a fraction about the world in her story, but every page rings true. The military jargon, the code of conduct, the rules prohibiting fraternization between enlisted and officers are all spot on. Shakespeare quotes are sprinkled throughout the story as well, as both Sondra and her novel’s main character love great literature.

The novel’s heroine, Corporal Molly Monroe, is a Florida girl who joined the Marine Corps against her mother’s wishes, trained at Parris Island, and was sent to fight a desert war. The story begins with Molly lying unconscious in Bethesda Naval Hospital, suffering from traumatic brain injuries from an enemy suicide bomber’s blast. The storyline shifts back and forth in time from Molly’s fractured memories of her childhood, recruit training, her grisly combat experiences, and a violent attack as a teenager to her present day hospitalization. Her family and friends are there throughout, as Molly tries to make sense of her life.

Sondra retired from the Marine Corps in 2010 after 20 years of service. Today she works as an IT security consultant to the government. Her novel was ten years in the making, completed as part of Sondra’s MFA degree in English from National University. Her husband has also retired from service, and works as a civilian now at the Marine Corps Air Station, and the couple has two grown daughters. Amanda is married, living in Yuma, Arizona, and expecting their first grandchild. Their younger daughter, Breanna, recently graduated from Beaufort Academy and will be attending Clemson University in the fall. Her scheduled dorm move-in date is the same as her sister’s due date! All mothers can relate to this kind of scheduling stress.

Both of Sondra’s daughters were instrumental in creating the cover for Model Marine. Amanda was the photographer, and Breanna was the cover model, illustrating a young woman’s transformation from pretty, carefree teenager to professional military photographer in desert camouflage uniform.

When it came to writing Model Marine, Sondra emphasized that it was important for her to “get it right.” According to her, several recent movies have not gotten the military life and war time experience accurately, and the average civilian doesn’t know about the intense training and heartfelt zeal Marines gain during their difficult weeks on Parris Island.

When asked if she would like for her two daughters to join the Marines, Sondra took a breath and paused. Her younger daughter, she said, is too sensitive, and the military is not for those with sensitive personalities. Her eldest daughter, maybe, she said, but the Marine Corps is a huge sacrifice for a soldier who is also a mother. With both parents on active duty, the military makes no special concessions, Sondra said. There was a point in their own careers when the Meeks had to put their two little girls – alone -- on an overseas plane to stay with grandparents for six weeks. “There is nothing harder than leaving your babies,” Sondra said, and she admitted that she often felt the familiar guilt many military mothers do: she loved being a good Marine, but it made her feel like a bad mom. When she was being a good mom, she felt guilty that she wasn’t being a good Marine. “No,” she said. “You really can’t have it all, all the time.”

Hard on the family as it was at times, Sondra and her husband loved their time in the military. You can see it in the Marine Corps emblem outside their home, along with the bulldog mascot statue. “I wanted to reveal truth in fiction; not glamorize it, or demonize it,” Sondra said. “I wanted to show why I loved it (the Marine Corps) so.”

Sondra has lots of ideas for books to come, including perhaps a sequel to Model Marine. She will be visiting the Women Marines Association convention in Washington, DC, in August to connect with other women Marines, and she expects to get lots of good feedback from them on her novel.

Who would enjoy reading this book?

“Veterans will recognize this environment, and it will bring back warm memories for them. It will give civilians an appreciation for America’s heroes.”

Purchase your own: Model Marine is available on Amazon, and can be downloaded on Kindle and is locally at Beaufort Book Store, The Corps Store, and Pluff Mud Coffeehouse in Port Royal.