Marching to a New Heartbeat 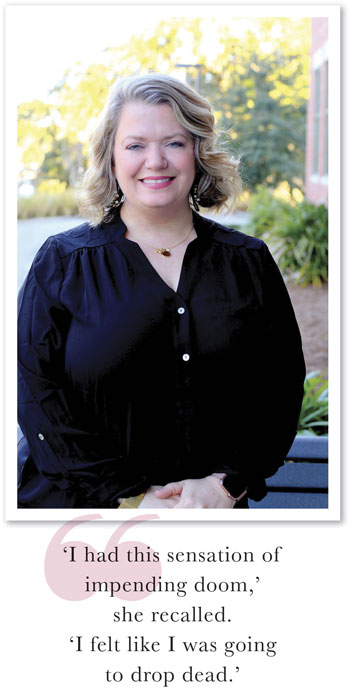 Two months into the New Year, Shawna Doran hasn’t given up on her goal to exercise every day, eat more fruits and veggies, and drop those unwanted pounds. But it’s not a resolution that has motivated the Lady’s Island mother of two to lose weight and improve her health. It was a near-fatal heart attack at the age of 45.

Shawna knew she had a family history of cardiovascular disease. Her father had a heart attack at age 41; her brother in his late 50s. On her mother’s side of the family, an uncle also suffered an acute myocardial infarction. Even so, she wasn’t worried she would develop heart disease because she maintained a fairly healthy lifestyle. “I’ve never smoked, I’m not a drinker, and I don’t eat fried food,” said Shawna, a registered nurse who serves as vice president of quality services at Beaufort Memorial Hospital (BMH). “I have hypertension, but I’m on medication, and I monitor my blood pressure every day.”

Recognizing her weight had crept up over the years, she enrolled in the Body Makeover program at Beaufort Memorial’s LifeFit Wellness Center. At the end of the 12-week exercise and nutrition program, she had lost inches and was feeling more energized. Then one day last June, when she was in her office in Beaufort Memorial’s administration building across the street from the hospital, she started feeling light-headed and nauseous. She felt a lump in her throat and her arms grew heavy and tingled. Shawna recognized the symptoms and knew something was wrong.

Formerly the STEMI/Cardiovascular quality coordinator for BMH, Shawna played an integral role in the development of the hospital’s Percutaneous Coronary Intervention (PCI) program. In 2013, BMH received state approval to perform emergency cardiac interventions on patients suffering an ST elevation myocardial infarction (STEMI), the most dangerous type of heart attack. As the hospital’s original STEMI coordinator, Shawna was thoroughly knowledgeable of heart attack symptoms and those specific to women. While she didn’t have chest pain, the other warning signs fit a myocardial infarction. “I had this sensation of impending doom,” she recalled. “I felt like I was going to drop dead.”

Shawna’s assistant, Wendy Spears, quickly got her to the Emergency Department and her first EKG was nonspecific, so the ER physician sent her up for a CT scan, thinking Shawna was suffering an aortic dissection, a tear in the wall of the artery carrying blood out of the heart. The CT was clear, but Shawna’s symptoms persisted, and she began having jaw pain. A second EKG revealed it was a STEMI. “I was having an evolving heart attack,” Shawna explained. “When they called a Code STEMI, I couldn’t believe what I was hearing.”

Within 30 minutes she was in the catheterization lab being prepped for a PCI. Board-certified cardiologist Dr. David Harshman inserted a catheter into her heart, injected special contrast dye highlighting the blockage, which revealed 100 percent blockage of her left anterior descending artery. They call that a widow maker because of its high mortality rate if not treated rapidly. Using the catheter and inflating a small balloon, Dr. Harshman cleared the clot and inserted a stent to stabilize the artery and prevent it from blocking again. “As soon as he opened the artery and restored blood flow to my heart, my symptoms started to resolve,” she said. “The emergency department and cath lab team literally saved my life.”

She followed up the intervention with three months of cardiac rehabilitation at Life Fit at Beaufort Memorial. “Fortunately, she had minimal residual damage from the heart attack,” said Dr. Lee Butterfield, her board-certified cardiologist. “Her heart function is back to normal.”

Grateful to have a second chance, Shawna has stepped up her exercise routine. Her goal is to hit the gym three times a week and do some form of cardiovascular exercise daily. “Doing something every day, whether walking, working out or exercising to a video, is important to maintain cardiovascular health,” she said. She has started following the plant-based Mediterranean Diet, loading up on fruits, vegetables, whole grains, legumes and nuts. Since her heart attack June 20, she has lost 15 pounds.

“I didn’t feel like I was a ticking time bomb, but I realize now I could have taken better care of myself,” Shawna said. “Like so many women, I was too busy doing everything else and nothing for me.”

Up Close:
Family: Shawna and her husband Brett have two children, 17-year-old Colton and 13-year-old Ava.
Just for Fun: Just completed a “she shed” for her crafts. She enjoys making jewelry and burlap wreaths.
Favorite Exercise: Weight training.
Must-Have: Water. She drinks at least 75 ounces a day.

Heart Attack Symptoms in Women:
Far deadlier than breast cancer, heart disease is the No. 1 killer of women in the U.S, accounting for 1 in every 4 female deaths. “The problem is women often don’t present with the classic symptoms,” said Beaufort Memorial board-certified cardiologist Dr. Lee Butterfield. “More than half don’t experience the kind of pain that feels like an elephant is sitting on your chest.” For women, heart attack warning signs can include:
• Tingling or pain in the arm, back, neck, jaw or stomach
• Back pain
• Nausea or lightheadedness
•Shortness of breath
•Discomfort in the chest

“Symptoms can be nondescript,” Butterfield said. “If you think you could be having a heart attack, call 9-1-1 right away. It’s better to err on the side of caution.”