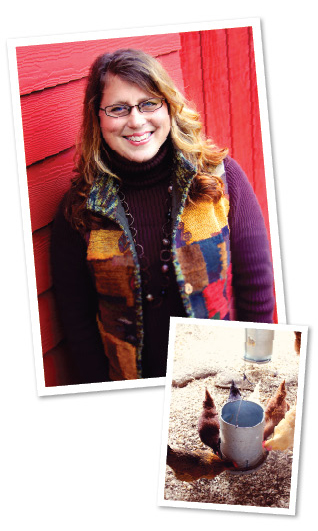 When I arrive at her farm late in the afternoon, Sharon is standing beside a bright red barn, smiling for Pink's camera. A minute later, her husband and eight children emerge from their house, and there's plenty of laughter as they all join her for more pictures. Afterward, they give me a brief tour of their five acres and introduce me to many of their animals, and then the children take turns swinging through the air on ropes they've tied to nearby trees. It is a happy place, this place Sharon calls home.

Originally from Pennsylvania, Sharon attended Shippensburg University, graduating with a degree in criminal justice. Afterward, she moved briefly to Florida and worked as an insurance agent before relocating to the Lowcountry to work first at a dealership and later as a private investigator. It was here that she met and married her husband Mark.

In 2003, shortly after the birth of their fourth child Elaina, Sharon discovered she had cancer. A series of treatments left her cancer-free, but unable to have more children. This is when she and Mark began to contemplate adoption. However, she notes, "Cancer wiped us out financially. We were toast but for God." Ultimately, His Kids, a Christian adoption ministry, gave them the necessary financial support, so they chose two children from Ethiopia and brought them home.

About a year later, Sharon received a DVD in the mail about groups of children from Ethiopia in need of homes. She watched it with her son Lawson, and afterward, Lawson said, "We've got to go get some of those kids." She and Lawson both gravitated toward the same group of four children, chosen out of over 200 featured children. When Mark got home from work and watched the DVD himself, he unknowingly chose the same group of children. Later, the lady Sharon spoke with from the adoption organization, unaware that the Mansells already had specific children in mind, providentially recommended the same group of four children. So, in the spring of 2007, they moved from their house in town into a double-wide on five acres, wanting space for their growing family and a farm that would eventually be self-sustaining. That summer, they brought the four children, ranging in age from 4 to 13, home.

It was a time of transition for all, but Sharon clarifies, "It was never bad. Christ became the center of our family. Now, our life is no big deal to us, but to other people it is. A 'downward' move makes no sense to them, but God has given us different desires. God showed us what is important."

Chief among Sharon's responsibilities now is the homeschooling of the eight children still at home. The family begins their mornings with chores, and then they all meet in the homeschool room for devotions and catechism. Afterward, the children begin their schoolwork. Sharon points out, "It's about character-building first," and believes that because they focus on that, they rarely "have the issue of not wanting to do the work." Sharon also gives the children a great deal of say in choosing what they want to study and what types of chores they prefer. "They own it," she explains of their overall educational experience.

The farm lends itself well to making the children's education real-world and practical because of their involvement in it. In addition to caring for the land and the animals, for instance, several of the children have volunteered to plan and prepare many of the meals. They use what's available from the farm and have budgets for any necessary store purchases. As Sharon defines it, "Immersion is the way we do everything."

Sharon's not sure what the future will hold, but would welcome the possibility of adopting more children-if that's what the Lord brings. She also mentions that she and Mark are eagerly expecting their first grandchild any day now and that they hope to someday have 100 grandchildren. One thing is for certain, however: no one's ever made farm living with ten kids in a double-wide look so incredibly good.

Other endeavors: Sharon coaches a debate team for homeschoolers. She also demonstrates and sells L'Equip products like grain mills, Bosch mixers, and other baking products.

Funny story: One day shortly after they brought the last four children home from Ethiopia, the family was expecting company. Sharon ran to the store, and when she returned, her floor was covered in grass and the house was filled with "decorations", such as tablecloths shoved in vases. The children greeted her at the door proudly, having prepared the house in a way befitting company in Ethiopia. Now, the family all laughs at the memory.

On cancer: Sharon says that in her case, "Cancer was a blessing in our lives because of what God chose to do through it." She concedes that it was difficult, but says, "It was nothing compared to the blessings we received on the other side."