What the World Needs Now 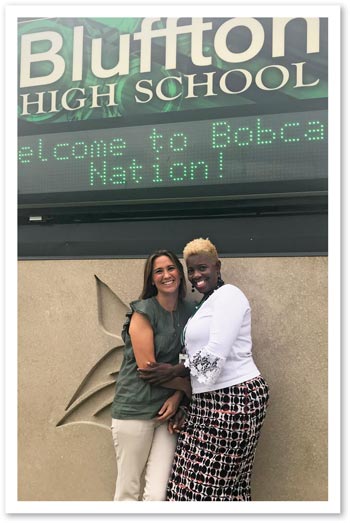 I highly suggest you sit down and really read this article. Find a nook to snuggle in, a coffee table to put your feet up, and point your undivided attention to this page. This story is about what humankind needs more of:

Sharon Brown is not your run-of-the-mill kind of woman. She is a woman who has overcome obstacles most can never navigate. From her mother dying to becoming an alcoholic at the age of 14, to being a full blown addict to run-ins with the law, Sharon can now hold her head high because her story defies the rule of cause and effect. “Because He delivered me, I would tell my story on national TV,” she said.

Sharon has surprised herself with her recovery and the happiness and success she has found both in her career and in life. She is now a mother, an involved grandmother to a beautiful 9-year-old granddaughter, a soccer coach, a basketball manager, and the current secretary to the principal at Bluffton High School. When asked about her favorite part of her job, her eyes lit up and she responded: “I get full gratification seeing all the students throughout the day. I see their problems; it reminds me how I struggled in high school. I never want to be part of a problem again—only part of the solution.”

Sharon has a big personality that comes through in her smile, her booming voice and her laughter; she lights up every room she walks into, and the children take note. Sharon “adopts” kids, different each day, and checks on them to see how they are. One day, a young man walked into Ms. Brown’s (that’s what the students and parents call her) office and asked if she had something to eat. This got her gears turning and she thought to put out a small basket of snacks so the kids could have something to munch on if needed. After seven years of having the basket for the kids, she has been deemed “The Food Basket Fairy.”

Recently, a student came in asking for something to eat out of the basket when Heather Nix, a mom of a sophomore at the school, was standing in the front office where Sharon’s desk is located. Heather asked Sharon about his request. After Sharon explained, Heather took an idea to the drawing board and got it up and moving. Her first thought was about how much money Sharon must spend on all those snacks for the past seven years. Heather made a Facebook post about Ms. Brown’s generosity, and the gifts begin to flow.

A few weeks later, Heather walked in the school’s front door with an abundance of gifts for Ms. Brown. In a video, Heather stated with anticipation, “This is better than Disney World.” With the biggest smile imaginable, she approached Sharon: “We have a gift for someone, that someone is you.”
“ME?” Sharon says.

“Yes, You have done something I don’t think you realize. You have done so much behind the scenes that has not gone unnoticed by these kids. We just all love you. You don’t even know how much you’ve affected our community.” Heather continued her beautiful gesture by giving Sharon a basket filled with hundreds of dollars of gift cards all collected from the Facebook post. “I found you on Facebook, and you’re the one who talks about the blessings. You bless others and now let others bless you,” Heather said.

The gifts kept flowing. Heather gave Sharon a gift card for a massage and facial, which was donated by LUX Medical Spa. Heather continued, “Just keep doing what you’re doing. You don’t even know the hundreds of people you have impacted.” Lastly, Heather, with shaking hands, presented Ms. Brown with a check for $1,571 dollars, moving both of them to tears.

Screaming in happiness, Sharon’s first reaction was to say she couldn’t accept such a gift, the a huge hug, followed by one question to Heather, “What is your name?”

This moving exchange exemplifies the simplest rule in the book: Treat others how you want to be treated. Heather was moved by Sharon’s concern for the student’s well-being, which sparked the idea to show appreciation for someone who is so deserving—a snowball effect of kindness in action. “One thing people loved about this beautiful salute: It wasn’t political, it was heartwarming. It’s nothing more than helping the kids and appreciating the women who takes care of them when we can’t,” Heather said.

Sharon later explained, “It blew my mind. I felt very uncomfortable at the time but thankful. I won a CD once, but other than that I’ve never won, or been given anything like this.”

It is arguable that relationships make the world turn. They are the foundation upon which we build our love through, fill our time with, and share our dreams with. People need to take care of other people and that’s what Sharon Brown does and just what Heather Nix, a random mom in the front office at the right time, did, too.

The theme for this months magazine is #BeTheDifference, and there is not a better duo than these two women, whose crossing of paths culminated in the epitome of making a difference.

Heather slides in her last words to Ms. Brown: “When I walk out these doors, you make me want to save the world.”

“Let's go save it together,” Sharon said.