Just One More: Hooked On Fishing 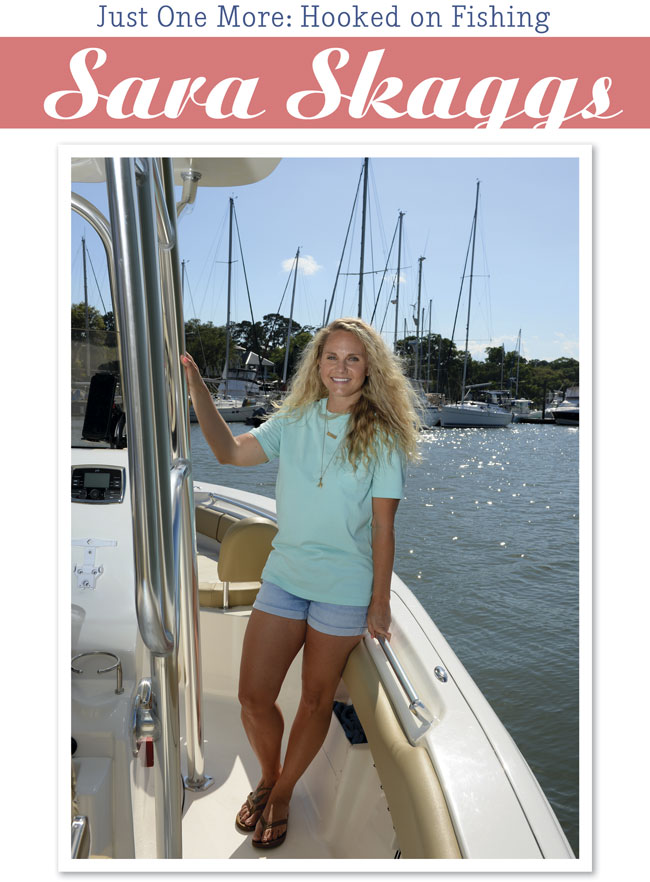 by Mary Hope Roseneau
Photography (above) by Christian Lee

Sara Skaggs looks like a California beach girl, with curly blonde hair, a gorgeous tan and a beautiful smile. Actually, she admits to having grown up in San Diego. Her father was a career Marine, and they spent time at duty stations on both the East and West Coasts, finally deciding Beaufort is home. Sounds like a Pat Conroy novel, doesn’t it?

Sara and her family, Mom Sheri, Dad Russel, and her 4-year-old son Oliver, love spending time on the water. They enjoy Hunting Island State Park, a beach house in Ormond Beach, Florida, and boating and fishing in their aptly named boat, a 239 Key West, “Just One More.”

During the week, Sara starts her day with the Beachbody workout. She gets her son to school and is busy as a mortgage loan originator at FBC Mortgage in downtown Beaufort, working with her mom, who is the branch manager. Sara enjoys helping people get their dream homes financed, many of whom are young, in the military and first-time homebuyers. She tries to make it as easy and painless as possible, assisting them with all the papers and forms so they can make that winning offer on a home.

On weekends, she is busy with T-ball with her son, Oliver. She’s currently learning about bleacher sitting with the other mom’s while the little boys hit baseballs off a tee, and hopefully run the right way around the bases. 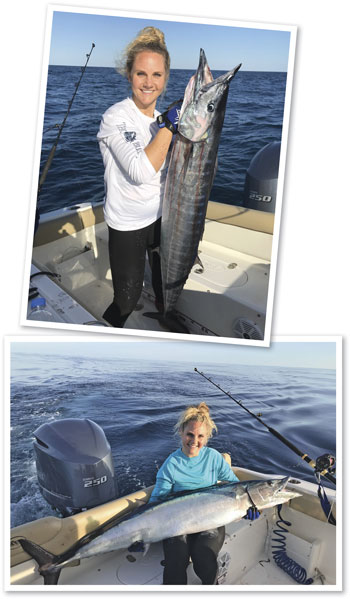 The latest news about Sara and her dad is their recent participation in a wahoo fishing tournament, and coming in No. 22 in a field of 135 entries. What’s more, it was their first try at a tournament like this, and their boat was a single engine, not a giant dual or even triple engine monster rig that many professional anglers invest in.

The rules state the entrants register for three different days between February 8 and April 27, 2019 and must have the fish they catch weighed at specific marinas between Georgetown and Hilton Head Island. Pictures of the fish, including the boat and GPS screen must be included in the entry. The combined weight of the two heaviest fish determines the winners of the tournament.

The first place team this year caught two fish weighing 157.1 pounds combined, winning the $30,000 grand prize. Sara, her dad, and Michael Smith, the third member of their crew, caught three fish over the three fishing days, and their two heaviest total was 103.4 pounds. This is quite a respectable showing, considering fishermen from all across the Southeast participated.
Sara’s father did his homework about the best days, times and spots to fish. It’s an exciting experience to hear the line screaming as a fish grabs on. “It’s a good feeling, targeting a fish and actually catching it!”

“It’s really a team sport,” she emphasized. One crew member captains the boat, keeping it at a high speed troll, while the other two have rods strapped into fixed holders in the back. When the fish hits, the two in the back have to take turns working the reel to bring it up. It’s an exhausting battle, especially for the fish. It finally is done fighting after about 30 minutes, and is brought into the boat with a gaff. A special fish bag is brought along to stow the fish because the coolers and well areas are much too small for these long, tall fish. In one picture (above), the fish is taller than she is!

The team would leave Beaufort before dawn to put in from Charleston. It’s a shorter trip out to the deeper water—60 or 70 miles offshore where the wahoo were running. They stayed out most of the day and returned back to shore when the gas gauge indicated their fuel was running low.

I asked Sara if they eat these huge fish, and she said, “Oh yes, they’re delicious.”

“Right on the boat,” she replied. They cut them into chunks of white, firm meat and eat them like Sashimi. “Delicious!” she assured.

Other recipes include grilling, crusted parmesan, fried chunks (kind of like chicken nuggets!) and fish tacos. “My freezer is full of wahoo,” she said, and I believe it, looking at the pictures she took.

Plans for the future? Sara and her team are considering other tournaments, after their great success in their first one. The Beaufort Water Festival Tournament will be underway soon, and she’s considering a Kingfish tournament, as well. Looks like her dad better start looking at bigger boats!

For information about the South Carolina Wahoo Series: go to www.scwahooseries.com

Preheat oven to 425˚. Butter a baking dish. Mix together all ingredients, except the parsley and fish, in a bowl and set aside. Dry the filets with paper towels. Place in baking dish. Cover with the cheesy mixture and bake about 8-10 minutes until almost done. Temperature should be 125-130˚ in the thickest part of filet. Move filets to the broiler for the last 2-3 minutes to brown and crisp the tops. Garnish with fresh parsley. The fish should flake easily with the fork.