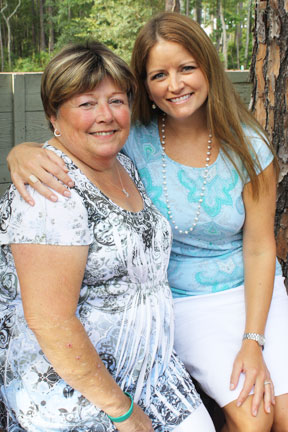 Standing at a mere 4'10Ω", Sandy Hull is one of the strongest women I have ever met. Her courage is evident in her strength against uncertainty, her battle to survive, and the light in the eyes of her daughter, Libby, fighting right alongside her.

On June 20, 2010, Sandy went to the emergency room with severe swelling and pain in her abdomen. Through Libby's work at Memorial Hospital in Savannah, she was aware of the signs of ovarian cancer and suspected the worst, but the doctors almost immediately ruled it out. For three months Sandy jumped from doctor after doctor, continually receiving faulty diagnoses and quick-fix solutions. Finally in September Sandy was directed to a specialist in Savannah, who, in four days, was able to confirm the fears she and Libby had all along: she had ovarian cancer.

By Thanksgiving Sandy had begun chemotherapy and lost nearly all of her hair. On Thanksgiving Day her family surprised her by wearing shirts they had made, promoting her fight to survive. Then, on the Monday after Thanksgiving, Libby received a call from her doctor: she had Cervical Cancer. At 33-years-old, Libby had never had an abnormal annual exam, had no signs or symptoms of disease, and was feeling healthier than she had ever felt.

Libby held off from telling her parents or co-workers until she met with a specialist, the same specialist her mother was seeing, who informed her that she would need a Radical Hysterectomy, removing nearly all of the inner organs that made her a woman. At this point, she knew she had to tell her parents. "One of the hardest things was that we thought she was coming over to tell us she was pregnant," said Sandy. "For me, hearing my daughter had cancer was harder than hearing about my own because of the mother's desire to protect her children."

On January 4, Libby had her surgery, using the state-of-the-art Davinci Robot, which helped lower her recovery time from eight-to-twelve weeks to only four. During her four-week recovery time, Libby had time to deal with some of the anger and bitterness she still felt regarding the misdiagnosis of her mother's condition, along with the shock and confusion behind her own diagnosis. Her reflection and research created a desire to develop an organization to raise awareness and funds for women dealing with the lesser known and seldom talked about GYN cancers. She creatively named the organization "Help the Hoo-Hahs".

"Twenty years ago no one talked about breast cancer, but now you will see a man wearing a hat that says 'Save the Ta-tas' and not think anything of it. One in 20 women will be diagnosed with a GYN cancer sometime in her life, and yet no one is talking about it, whether it's because they are too embarrassed or afraid to face the reality," said Libby. "My goal is to teach women to advocate for their own health, and to make them aware of the signs and preventative measures of GYN cancers. You can't always listen to the first doctor you go to; you have to know your own body and know when something is wrong. It took three months for my mother to be correctly diagnosed, and it frustrates me to think about the what-ifs."

Help the Hoo-Hahs inaugural fundraising event will take place in the form of a 5K walk/run on September 24*. Libby's dream is to take the organization to a global level to help provide funding for research, but for the current time, all the money raised will benefit local women in our community through the Memorial Health Foundation. "Often times, even if a woman has insurance, it does not cover all of the unexpected costs that go along with a cancer diagnosis. Whether it is gas/grocery gift cards, wigs to help someone feel a little more 'normal', or help completing a 'bucket list', local women need our help," said Libby.

For Sandy and Libby, the date of the inaugural race holds a special place in their heart, as it is the ninth anniversary of the day Libby's grandmother died in a car accident. As I concluded my conversation with these two amazing women, I watched as Sandy reached across the table and handed Libby $200. "This is the last of the money found in your grandmother's wallet; she always carried it with her in case of an emergency. I want you to have it for the cause. I know your grandmother would be so proud of you, as I am," Sandy said, with tears in her eyes. "Libby has always been very opinionated, outspoken and passionate about things that matter to her. I just figured all of this happened because God needed a spokesperson."

As I got in my car to drive away, tears filled my eyes as I thought about these two brave women and their ability to turn confusion into courage, fear into fight, and pain into power. These are the women who will change the world, one Hoo-hah at a time.

Every year more than 71,000 women are diagnosed with a GYN cancer, and this year more than 26,000 women will die from these diagnoses. The devastating reality of ovarian cancer is that the vast majority of cases are diagnosed in the late stage, and 75% of women do not live five years. Please, take the time to get your annual exams and educate yourself on the signs of GYN cancers and the preventative measures you can take.
The inaugural Help the Hoo-Hahs 5K Walk/Run

Where: Savannah International Trade Center
When: Saturday, September 24 at 8 a.m.
For more information: Visit helpthehoohahs.com, email This email address is being protected from spambots. You need JavaScript enabled to view it., or check out their Facebook page.