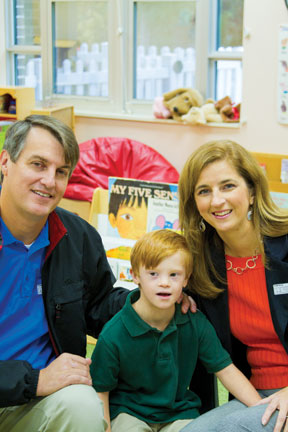 Six years ago a little miracle by the name of Wayne Parrish Neville, Jr. was brought into the lives of Samantha and Parrish Neville and the rest of the Lowcountry. He was the couple's fifth child, born to Samantha at the late age of 39. He was sweet, happy, and healthy, except for one surprise: he had Down Syndrome. Although this came as a shock to Samantha and Parrish, who had never given the 2.5 percent chance that the baby might be born with this condition a second thought, they were nevertheless overjoyed with the gift that God had given them, and the light that Wayne has continued to be to everyone he has encountered since.
At little Wayne's birth party, Samantha placed cards all over her home simply stating "Wayne's Miracles", that outlined the miraculous events that occurred prior to and surrounding his birth. In a nutshell, they included:
. Prior to Wayne's birth, Samantha and Parrish considered adopting a baby, who was expected to be born with Down Syndrome, to save it from being aborted. Although they were too late, the thought remained stuck in Samantha's mind.
. Wayne was born on a Wednesday, which "happened" to be the day their family doctor was off work, enabling him to stay with them all day, uninterrupted by other patients.
. Another doctor who assisted in their birth "happened" to be an out-of-town specialist in the conditions of Down Syndrome children, and she "happened" to be covering for the regular doctor.
. The Nevilles had made prior arrangements to have baby Wayne circumcised on his eighth day, and even after he was transferred to MUSC in Charleston, he still "happened" to have the procedure done on the eighth day.
. The hospital was able to find the Nevilles a room in their Ronald McDonald house at the last minute. Samantha's background is in Interior Design, and the home "happened" to have been redecorated just a week prior to their stay.
Perhaps you see these as miracles, perhaps simple coincidences, but there is no doubt that whatever stars aligned to bring baby Wayne into the world have continued to shine through him ever since. "Wayne is here for the rest of us; he makes us look at life in a whole new way. He gives to everyone he encounters and lights up every room he enters," beamed his proud mother. "I never knew anyone with Down's before because when I was growing up they kept those kids secluded. When you have higher expectations, amazing things can happen! Wayne is full of energy; he wears his mom out. He plays and rough houses just like a normal boy. He has likes and dislikes, he shows his emotions, the only difference is he can't talk as well. I'm thankful he has his siblings around to help take care of him, but the older he gets, the more I think he won't need a lot of help in the future."
Shortly after Wayne was born, Samantha received more shocking news: a breast cancer diagnosis. Although she faced a long and overwhelming road of surgery, chemotherapy, and illness that eventually led to her recovery, when she speaks of this road she radiates only the positivity of faith and her continued belief in miracles. "My doctor ordered me to get my first mammogram after I had been done nursing Wayne for six months. I placed the note on my calendar, and forgot about it until 16 months after I had finished. If I had gone right when I was supposed to it may have been too early to catch it," recalled Samantha. "My treatments are behind me now. I gain my strength back with each passing day. The adventure was one of the most difficult experiences of my life. However, as time goes on, the Lord reveals to me the lessons I learned, the strength I gained and the blessing I can be for others. That is God's plan. Thank goodness He is in control!"
Samantha Neville has the true gift of recognizing the miracles all around her, but what she may not realize is what a miracle she is to her family and an inspiration to others. This strong woman has battled cancer, is raising a beautiful special needs child, juggles homeschooling three out of five very active children, is currently working part-time as an assistant interior designer, and does it all with a calm demeanor and an everlasting faith. This holiday season, I urge you to follow Samantha's example, and take notice of the little miracles in your life, because they are truly all around you.

Up Close:
Family: Husband: Parrish; Children: Brantley (17), Priscilla (15), Bethany (12), Sarah Natalie (10), Wayne (6)
Proud mother: Brantley is very talented with music and creating videos, Sarah Natalie does ballet and was in the Nutcracker last month, and all the girls and Wayne play soccer. Last season Wayne scored his first goal!
Wayne's favorite things: Watching Finding Nemo over and over, talking in a microphone, watching football and yelling at the teams (both in person and on TV!), his Daddy, and his Nanny in Statesboro, GA.
Samantha's definition of a miracle: When unexpected things work out for good when you don't think they're going to.