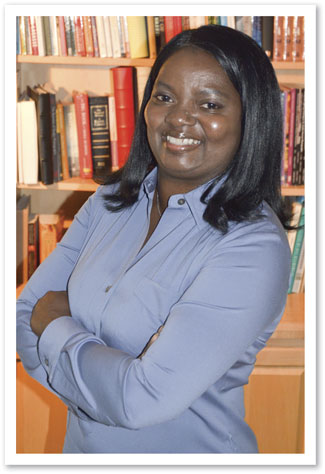 She’s a powerhouse of passion in the world of book publishing; founder of the Bluffton Book Festival, and business owner extraordinaire of ROCK Inked. Rockelle Henderson brings a tenacious, #smartypants spirit to all that inspires her.

Originally from central New Jersey, Rockelle moved to the Lowcountry 11 years ago. From a young age, her mother, Pennie Sherrod, also a local resident, instilled in Rockelle a love for the written word. So it’s not surprising how much she loves books! She was 17 years old when the fascinating world of promotion and publication drew her in. She earned an internship with NBC Radio at New York City’s Rockefeller Center. Rockelle helped with daily program set up and fell in love with all aspects of the business model. “I was hooked!” she said.

The youngest of six, Rockelle laughed when she admitted her family still doesn’t know what she does for a living! Yet it’s quite apparent that what Rockelle does is work hard. She attended college at night so she could work during the day, wanting to experience what she was studying, and her professional resumé follows an impressive climb through several major New York City publishing houses. Her first job was advertising sales for Sunset Magazine, a high-end western living publication out of Oakland, California. “It was exciting,” Rockelle recalled. “Advertising drives the psyche.” She enjoyed her time there, but wanted to work more from the media side of business, so after three years at Sunset, she landed an opportunity at Penguin Publishing Group. This was where her publishing career blossomed. Starting as a marketing assistant, Rockelle moved swiftly through the hierarchy and finished as Associate Director of Operations. She held the extraordinary responsibility of Global Inventory of all non-children books. Rockelle told the story of how she waited two weeks to occupy her newly appointed office. “Stephen King apparently needed a quiet place to finish one of his books,” she smiled, “and decided my office was just the place!”

In 1998, after seven years with Penguin, Rockelle took an opportunity as Product Manager for Random House. She shared of her excitement in working on the advertising campaigns for Tom Brokaw’s brilliant New York Times bestselling novel The Greatest Generation. “The author is most important,” she said. ”It is essential to make them comfortable with the process.”

HarperCollins was her next career adventure destination. As Advertising and Promotions Manager, Rockelle handled media buyers and designers. It was during this incredible time when her hard work presented an opportunity of great significance. HarperCollins acquired Amistad Press—one the country’s leading publishers of African American authors, founded more than 30 years ago by publishing executive Charles Harris. Rockelle was offered the chance to be Amistad’s new Marketing Director and Publisher. She accepted the legacy opportunity and enjoyed helping novels such as The Known World by Pulitzer Prize-winning author Edward P. Jones make it onto the New York Times Best Sellers List!

During those busy and exciting six years, Rockelle met many media giants, including authors Terry McMillan and Jeffrey Toobin, as well as Oprah Winfrey and Anderson Cooper. The memory of meeting Cooper still makes her laugh. “I was star struck,” she remembered. “Truly star struck.” Her tone softens then, as she remembered favored author and friend, the late Michael Crichton. “He was a gentle giant and an extremely kind man.”

Though no longer living in the Big Apple, Rockelle’s connection to the New York marketing and promotion world remains. She is President and CEO of her own corporation, ROCK Inked, an entertainment and marketing publishing firm. One current project has her writing a six-week educational library program for Nickelodeon Studios that will serve more than 200 libraries across the country. Rockelle does promotion work for many brands of entertainment, from major film houses to television, and she also continues to consult for the book industry.

Rockelle is founder of the Bluffton Book Festival, and talks about its spirit-inspired genesis. She remembers “hearing” about the book festival long before one ever existed! She had a persistent recurring thought that couldn’t be shaken. So in 2016 she made it a reality. The popular annual event benefits The Book Industry Charitable Foundation and the literacy center. It provides practical recourses for bookstore employees and brings awareness to local writers. In addition, Rockelle is a recent inductee of the Rotary Club of Bluffton, part of the Rotary International service organization, which brings professionals together for humanitarian services and encourages higher ethical business standards.

Rockelle is a beautiful example of how self-directed passion and dedicated effort make for an abundantly fulfilling life.

She always wanted to be: A gymnast

B.A.E. [Best Aunt Ever]: Rockelle has 26 beautiful nieces and nephews!

Favorite Sport: Curling! Yes, Curling is her favorite sport to watch (it has the skill!).

Maybe there’s still time: To be a gymnast!

Learn More: www.blufftonbookfestival.com; This email address is being protected from spambots. You need JavaScript enabled to view it.