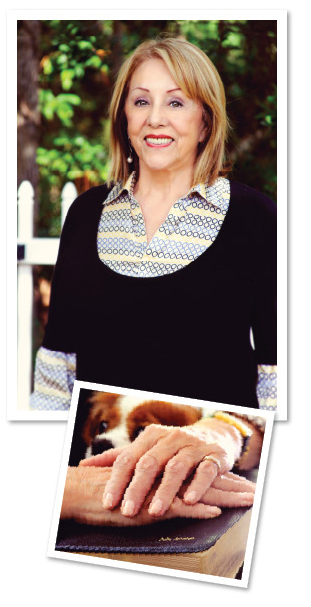 There was a quiet, relaxed peacefulness about her the day we met in spite of the traumas she has suffered. She and her three children, ages 4, 2, and 5 months were abandoned by her husband.

Julie Johnson lowered her eyes in remembrance. "I was suicidal," she admitted. "Besides the trauma of divorce, my oldest, Leslie, was born with Cystic Fibrosis, and I knew my children needed me. The obstacles were frightening and overwhelming until I met a Christian Scientist. He introduced me to metaphysics, the power of our thoughts and the damage fear can do."

Born and raised in New York, Julie received her BA in English, and taught it, as well as Spanish in California, where she began studies for a doctoral degree. "When my husband was transferred back to the East Coast, my doctorate was put on hold. It was important for me to learn more about myself and help others, so I finished at UConn with a Doctorate in Psychology."

Julia's life was changed by a stranger who gave her wrong directions. "I was in California and asked directions to the Christian Science Church; instead, I was given the way to the Unity Church, and decided to look into it since I was there." From a causal "looking into it" Julie's thoughts led her toward the ministry, so in her late 30s she attended the Unity School of Christianity in Missouri. "It's close to Christian Scientist, encouraging us into a positive life through our thoughts, words, and overall life behavior. 1986 was an amazing year for me. The day I graduated from seminary, my daughter, Leslie, who doctors said would not live five years with Cystic Fibrosis, graduated from college!"

When God calls, if we're in tune, we answer. Julia answered. For ten years she ministered to her congregation in Ohio, leading and exemplifying the art of living a positive life. She was then led to Unity World Headquarters in Jackson County, Missouri, where she was associate minister for two years. As Julie was growing in the new thought ministry, daughter Leslie, happily married, continued battling her own life struggles with her disease. Whenever Leslie needed Julie, she was at her side. "She did so well, for many years, but at age 48 her crisis times began to occur closer together, and she was in the hospital every two months," Julie said sadly. "I moved back to California to be near her and continued my ministry there. Too many things were going wrong for her, but I never expected her to die before I did. We lost her October a year ago, when she was 50."

Tears welled up in her eyes as Julie looked for the positive side. "Certainly, I was fortunate to have so many good years with her. I am grateful she is no longer trapped in a sick body, and for my absolute knowing she is alive and well in another dimension."

On the lovely, refreshing fall day we shared experiences, and sunlight crept into her eyes again when speaking of her mission, which started here in the Lowcountry last March. As Minister of The Unity Church, founded here in 1998, Julia emphasizes it is open to all. "Our Principles of Unity state God is absolute good and present everywhere. We believe because humans have a spark of divinity within them; they are inherently good. Our 'activity of thought' creates our own experiences, and everything in the manifest realm had its beginning in thought. We also believe prayer is creative thinking, heightening our connection with God, to bring about wisdom, prosperity, healing, and good. Understanding and knowing these guidelines is not enough. We must live the truth we know. It was only a small body of like-minded people, feeling they wanted to worship beyond the limits of creed and denomination, who grew and formed The Unity Church of Hilton Head Island: A Path for Positive Living, which now meets every Sunday at 10 a.m. in the Sequins Ballroom in Bluffton," reminded Julia. "We have a children's church for ages 2-13 to help them to grow into authentic, God-filled adults. We learn from The Bible, which is interpreted metaphysically, and we are now about 140 members composed of multiple heritages and religions. Small groups meet in homes during the week, offering the opportunity for spiritual development and new friendships. We strive to maintain a cohesive, loving community of spiritual seekers."

UP CLOSE
In a quote: A well known quote by an unknown author summarizes Julia. "Fear knocked on the door, faith answered...and lo, no one was there."

Fun Fact: Was debate coach for a high school team, which placed 16th in the Nation! Loves: "Being able to see the stars here at night!"