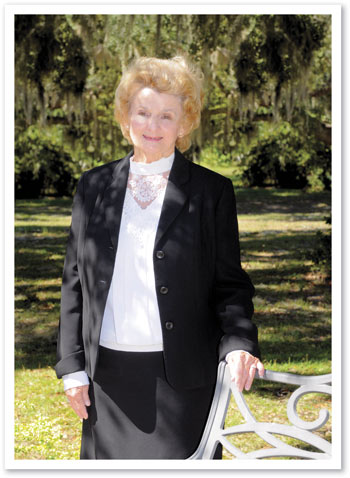 The Port Royal United Methodist Church is tucked away on 16th street and Columbia Avenue in Port Royal, the opposite side of town from the Sands, the hip restaurants, and the new high end but made to look old houses. This area is vintage Port Royal, the way it used to be. The houses in this neighborhood are modest, and so is the church. It’s a concrete block building with an updated roof, several outbuildings neatly painted, and a sign posted by the driveway: No one allowed in before 7 a.m.

Anne Bridgers, the church pastor, spies me parking my car and comes out to greet me. She’s wearing a black cleric top and has pretty, twinkling eyes. She’s a former schoolteacher, and she still has that “Let’s get down to business” air about her. She told me on the phone she does not like being “showcased” and she’s not sure about this whole article idea. I brought her a copy of the October magazine, hoping the inspiring articles would reassure her.

Rev. Bridgers is a woman who had a successful early life as a wife, mother, and English department head at a private school for 29 years, but when her husband died unexpectedly in 2009 her world was turned upside down. For a couple of years she was in shock, she realizes now, but then she began to get ready for the next phase of her life.

She found it in a call to the ministry and started the application process in March 2011 with enthusiasm. She took Lay Servant classes, wrote her faith statements, had numerous background checks, and five (!) psychological fitness tests. The Methodist Church District Superintendent called to ask her how it was coming along, and she told him she had finished all the requirements and had passed them with flying colors. This was in June, and he asked her to meet him on July 11 at a little church in Port Royal.

After meeting with the church committee, the Methodist Church District Superintendent gave her just two instructions. “Go to work tomorrow at Port Royal, and love your people.”

Pastor Bridgers has done just that since then. As she says, “It was a God thing” when she completed the required training and that there was a church needing a pastor within driving distance of her home. She has gone on to complete more courses of study through the Duke University Divinity School and admits those courses weren’t easy.

The second year at the church she and several members saw a need for a free community outreach to provide clothes, linens, pots and pans, and all the rest for folks in need. The idea came to her the day a homeless vet came walking up to the church and told her he needed some warm clothes and a maybe a pair of jeans. She found clothes for him, and Phoebe’s Closet was born, named for the influential woman in the New Testament who assisted St. Paul on his missionary journeys. Phoebe’s Closet is open on Tuesdays from 10-noon, and Wednesdays from 3-5.

There was also a need for a food ministry, and via partnerships with Second Helpings of the Lowcountry (a United Way agency that collects food from grocery stores and restaurants for free distribution) and the St. Mark’s Episcopal Church in Port Royal, Anne got it up and going the next year. These days the ministry is busier than ever; she often finds people sleeping in their cars on Thursday nights to be the first ones in line for the food on Friday morning. That explains the sign in the church driveway; the food ministry opens on Fridays at 7 a.m.

“Of course there are always naysayers,” Pastor Bridgers confides, but she doesn’t let them get her down. She doesn’t judge people who show up early on Friday mornings for the free food; she greets them by name and asks how they’re doing. This creates a warm, loving place for folks who need respect, acceptance, and Christian love, as well as groceries. Many of the clients who come are elderly, and many of them are raising grandchildren, who also need to be fed.

The Methodist Church assigns their pastors one year at a time, and there is a yearly evaluation done by the church members, the District Superintendent, and the pastor himself/herself. Each person writes a recommendation as to whether the pastor should stay on, or be re-assigned to another church. Pastor Bridgers is quite happy with that system, and trusts that God will lead her to the next right place when it’s time to leave the Port Royal congregation. “I can’t wait to see where I’m led in the future. I’ve been blessed in so many ways and I just pray I can continue to be a blessing.”

What she does when she has too much on her mind: Gets in the kitchen, makes up recipes, and cooks big batches of food.

Family: A son, Jay, who is a veterinarian in Metter, Georgia, and a daughter-in-law and two granddaughters, who enthusiastically supported her decision to become a minister.

Favorite quote: “Preach the Gospel at all times and when necessary use words.” –St. Francis of Assisi

Port Royal United Methodist Church’s motto: “A church small enough to know you and large enough to love you.”