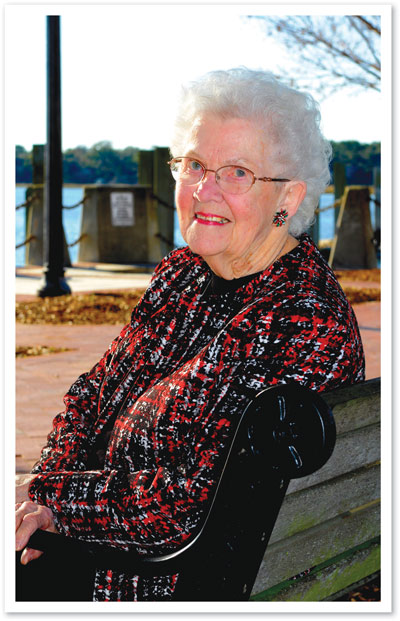 When Olive Warrenfeltz first picked up the violin in the third grade, her lessons cost just 50 cents a week! She was living in Buffalo, New York, and it was during The Great Depression. She loved the violin immediately, even though her mother wished she would have learned the piano. The next year her teacher referred her to another teacher in town because Olive showed such promise. Those lessons were five dollars each, and Olive didn’t realize then what a sacrifice it was for her parents to pay for them. She went on to graduate from Oberlin College, and taught strings in the public schools in Buffalo for 15 years.

She and her husband Jack had two daughters, Colleen and Maureen.  In 1970, Jack was transferred to Columbia, South Carolina, by the Burroughs Corporation, when the girls were in college. Olive continued with her violin, playing in orchestras and for special events, such as weddings. The University Of South Carolina School Of Music re-instated their orchestra that year, having been dismantled during World War II, and Olive was asked to be a violinist.

At that time there were no strings teachers in the Columbia schools. One day, while browsing in J.B. White department store, Olive saw a “Christmas Help Wanted” sign and thought she’d give it a try. She had never done retail work before, but it was OK with Jack, and the girls didn’t need her, so she thought she’d just try it for Christmas.

Almost 50 years later, Olive is still at it!

She went through several more moves with Jack, and in 1984, in Virginia, she started working for the Belk Liggett stores. “It was like a big family,” she said, with lots of the Liggett family working there together, and “everyone knew everyone’s name!”  She was assigned to the lingerie department, and it’s been her department ever since.

Jack retired in 1988, and they moved to Beaufort. Olive became active in the newly formed Beaufort Symphony Orchestra, led by Lowell Keene, who was also the new band director at the local high school. Other original orchestra members were Rubilee Knight, who has passed away, Kathy Ingram, who still teaches dance at Lady’s Island Middle School, and Brantley Harvey, Sr., our beloved late Lieutenant Governor. And of course, Olive continued to work at Belk, which actually bought J.B. White in Columbia.  In 1998, sadly, Jack passed away, but Olive has stayed busy!

She is a familiar face to shoppers at the Beaufort Belk store, where customers don’t want to deal with anyone else. She is trained to personally fit intimate garments; in other words, she can find you a bra that fits! Olive tried to retire in July 2017, but they called and begged her to come back in September. She had a two-month retirement, but it didn’t work out!

I asked Olive if she could share her secret for living such a long and healthy life.  She immediately said, “Keep moving!” She never sits for too long, and she keeps music in her life as a priority. She is also very supportive of the Beaufort Memorial Foundation. It dawned on her several years ago that sending flowers to the family of someone who is deceased is nice, but the flowers die, and that’s the end of it.  She started sending memorial contributions to the Beaufort Memorial Foundation in memory, or in honor of people who are still living. She says that contribution to our community hospital goes a lot farther than other gifts. She has been honored as one of the hospital’s most faithful contributors.

Olive is a beautiful and busy person with her music, her work at the store, and giving back to the community through the hospital foundation. Those wildly expensive five-dollar violin lessons her parents scrimped to pay for during the Depression were a wonderful, life-long gift!

What others say about Olive:

Kathy Ingram, cellist with the original Beaufort Symphony Orchestra and dance teacher with Beaufort County Schools says: “Olive is such an inspiration! I want to be like her when I grow up! She is a testament to how you should live your life. Sharing her passion with the arts helps to keep her vibrant and connected to her community.”

Lowell Keene, one of the first members and former conductor of the Beaufort Symphony Orchestra says, “Olive is a barrel of energy. What a good musician she is.  She is always solid as a rock, and comes to rehearsal with her part down. She is one of the sweetest and most fun people I know.”

Alice Beddingfield Moss, retired executive director of the Beaufort Memorial Foundation says, “Olive was recognized by the Foundation for being such a loyal, steady, and joyful giver. She frequently would come to our office to hand-deliver her contribution to the hospital in memory or honor of her loved ones. She became a dear friend to me, and always cheered everyone up with her visits.”

If you would like to contribute in honor or memory of others, here is the link to the Beaufort Memorial Foundation:
www.bmhsc.org/ways-to-give/bmh-foundation/