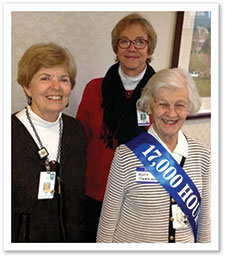 On a recent rainy afternoon, Millie Timmerman, who was honored for her 35 years of service with the Hilton Head Hospital Auxillary this year, energetically greeted me. “I always wanted to be a nurse, but my father felt teachers were badly needed and offered to pay for teacher’s college,” she recalled. “Funny thing, my sister who wanted to teach went to nursing school, and I wound up teaching 2nd and 3rd graders.”

Millie thoughtfully reflected on her childhood days during the depression: “The banks failed. The stock market crashed. My father’s company of 25 years went bankrupt. Reluctant to scare my mother, he broke the news to her in the kitchen while friends were visiting, hoping to ease her into the shock. We survived off our garden, and canned a lot of tomatoes,” Millie said. My father always assured, “God will take care of us.” She and her sister were raised in Sunday school and church and felt it was very important in their lives. There was no television, so church activities kept them busy. Their mother listened to baseball games on a short wave radio. It took World War II to pick up the economy. Bubbling with energy, Pennsylvania-born Millie related fascinating stories of life in the United States during the war. “I was recruited as a USO Director, and with help from other volunteers in many states, successfully set up the first clubs in which our service men gathered.”

Millie and husband Tim met and fell in love during these tumultuous war years. He proposed before leaving for the war in 1942. “We were to be married in June, but all leaves were cancelled due to the spotting of what was thought to be an enemy submarine. A great deal of embarrassment followed when it was discovered to be a whale! Tim finally made it home in the fall, and I wore my June wedding dress for our October marriage.”

The happily married couple survived the ravages of war. Tim returned home and worked for 30 years with a New Jersey textile company. Their family grew to six, as they added a daughter and three sons; Millie remained home to be with them.

When retirement time arrived in 1978, Millie and Tim built a new home on their Port Royal lot purchased in 1973. Millie leaned back on her sofa and laughed, “There was only one gas station, and we went to Savannah for panty hose.”

In 1989 while visiting with daughter Nancy, in Arizona, tragedy struck the 48-year Timmerman marriage. Millie slumped forward recounting the terrible event: “After he shopped for a few groceries, as he walked home, Tim was hit by a car. He survived the impact but never regained consciousness. My children lovingly guided me through that terrible period. Finally, my youngest insisted I get out of the house and get on with my life. He made me mad enough to do something!” she declared. “A request from Hilton Head Hospital for weekend emergency room volunteers stirred my original nursing desires. I felt it would be interesting and certainly not boring. In those days we had eight beds in the ER, and I thought the cooperative teamwork between the doctors and nurses amazing. I saw everything in there, and it was mind-boggling. What happens in the ER stays there, but one incident that happened many years ago, was the day our ER doctor delivered a baby. He was so proud, you would have thought it was his.”

Reflecting on her struggles, Millie said, “Surviving the death of a spouse means learning to do things you never have, accepting gratefully the support of loving friends and doing things for others.” Millie did just that. From cleaning beds to calming anxious families in the waiting room, she accumulated 17,000 weekend hours boosting others.

Suddenly, Millie popped up and rushed into the other room, returned and proudly showed me a beautifully framed citation from the Mayor, honoring her for her service. Now, in her late 90s, Millie drove until a few short years ago. Still volunteering at the hospital, still playing bridge and still tending her rose garden, she emphasized, “God blessed me with good health, and it’s by His grace I’m here! I just hope to leave the world a better place than when I got here.”

Surprise: “I once overheard a patient telling another; ‘Did you know there is a volunteer here who is 95?’”

Rewards: “Once a man stopped me at Shelter Cove and thanked me for saving his life in the ER. After checking with a nurse, I simply covered him with a warm blanket.”