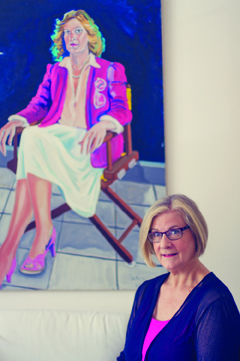 The world of dance, music and the arts is the world Michelle Audet inhabits. She is down to earth, funny, not the least pretentious.  Her mind is a shifting canvas, reflecting the forms and effects of a million artistic sources. That mind pirouettes from subject to subject following an internal choreography that keeps my pen racing.

Michelle describes herself as "theatrical and intense." She thinks like a philosopher and speaks like a poet. Her signature gesture is to start a thought, pause and then say "anyway" as she shakes both hands as if to brush away yet another distracting thought. But her life has a coherent core: her love for the transformative power of music and dance.

She tells me her seminal childhood story. She is transported to 1957. She is three- or four-years-old; her parents have taken her to the Bushnell Center for the Performing Arts in Hartford, CT. This is her first ballet. It is the George Balanchine production of The Firebird, by Igor Stravinsky. Maria Tallchief, Balanchine's wife at the time, dances the role of the Firebird. The curtain rises.  She vividly recalls standing on her seat in awe thinking, "Who makes this possible?" Back at home, she insists on being taught how to spell BALANCHINE, her own name being the only other word she knows how to spell. From that moment on she knew she had to dance.and it had to be with George Balanchine.

Michelle's parents-both doctors-created a home for their four children full of dance, music and art. They encouraged her passion for dance, although she says, "Given my intensity and energy, nothing could have stopped me." Except, at age 11, while rehearsing, Michelle fell and broke her back. In the hospital the doctors said she would walk again, but probably not run. That she would never dance again was too painful for anyone to say out loud.  She says, "The question I kept asking was, 'how can the most real thing in my life be taken away?'"

By the time she graduated from high school and left for Skidmore College in Saratoga Springs, NY, Michelle had a goal. "If I wasn't going to be a dancer, I could be a body of appreciation and share that. " She would take her passion for dance in a different direction. Utilizing her unstoppable energy and creative drive, she pushed Skidmore into letting her design her own major. She became the school's first Arts Administration major. It became a permanent part of the school's curriculum. She eventually got a Master's in Education and a certificate in business administration. And she achieved her life's dream of working with George Balanchine at the New York City Ballet.

In the late 70s, Michelle learned that the New York City Ballet (NYCB) needed a receptionist. She applied and got the job. Being a self-starter, who seized opportunities and pushed the limits, she realized that the NYCB had no real education or outreach program. This was her place. Within six weeks she talked her way into becoming assistant director of education.

Mr. Balanchine was interested in providing "student matinees" to introduce ballet to elementary school students in the NYC school districts. Michelle had the task of informing the fearsome Mr. Balanchine that his plan wouldn't work.but she had another idea. Ultimately, with his support, she developed a program for 4th and 5th grade students in NYC school districts. The first event was hosted by Robin Williams. 2500 schoolchildren were delivered by bus to Lincoln Center and seated within 28 minutes. At the conclusion Mr. Balanchine gave her a simple nod-the highest accolade she could have achieved. The program continued.

For almost 20 years the NYCB was her home and the dancers and musicians were her family. She designed programs and events that enabled people to "come into a new place and be changed." She had a big life in a big city during the heyday of American ballet.

In 2008 she came to Hilton Head to help care for her father (who has since passed away) and she is now caring for her mother.  Her question for this stage of her life is "Who am I here?"  She has never doubted for a minute she was meant to be here with her family. There is no regret. Slowly, things are emerging where she can use her talents, experience and energy. She is working with the Performing Arts Consortium in Hilton Head, which helps young musicians, and the Jazz Corner, which promotes the Hilton Head Jazz Camp for jazz students from ages 12 to 20. She also teaches courses for Lifelong Learning and at USCB.

She is still unstoppable. Her aesthetic appreciation fuels her relationships with the world, the arts, and the people she meets. She calls herself a synthesizer who uses everything to which she's exposed to create those connections-those gossamer threads-that hold our world and us together. "Through the arts we learn who we are; and if we are open, we can learn to reveal ourselves."

Up Close & Personal
Other Passion: Cats. Michelle rescued Gigi from the Hilton Head Humane Association, where she volunteers.
The Challenger: After she broke her back, Michelle questioned everything her Catholic nun/teachers taught her.
Reward: At graduation she won the Religious Prize, with the explanation, "The biggest doubters become the biggest believers."