At Coosa Elementary, Everyone Rises Together 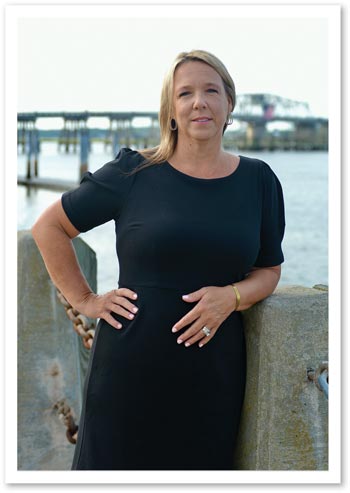 And although she is wildly successful, Melissa Pender — by her own admission — is not one of those people. Truth be told, Melissa didn’t plan to work in education or administration. In fact, she wanted to be an accountant—drawn to play with numbers rather than energetic, curious children. Only when she worked part-time at a daycare to offset tuition costs, did she recognize her passion for kids. Honoring her calling, she switched majors and earned a BA in Early Childhood Education from the University of South Carolina, Aiken.

As a former student at Laurel Bay Schools, Robert Smalls and Battery Creek High School, Melissa returned to the Lowcountry to begin her teaching career at Beaufort Elementary. She later moved to Davis Elementary before finding her home at Coosa Elementary in 1998.

A lifelong learner who saw the importance of bringing technology into the classroom, Melissa earned a Master's Degree in Integrating Technology in Education from Lesley College in 2004. After presenting at a conference attended by Cindy Keener, Coosa Elementary’s first principal, Melissa was asked by Cindy if she’d thought about working in administration. Feeling too young and inexperienced to entertain the idea, Melissa returned to the classroom for the next several years…but the seed to become an administrator was planted. When the Beaufort County School District launched an initiative to help those in the classroom earn a degree in administration, Melissa applied and was accepted into the cohort.

Earning her Master’s Degree in Educational Administration from the University of South Carolina didn’t immediately catapult her into a new job though.

“I thought my goal should be to teach every grade at the elementary level before I would be qualified to be a principal,” she explained. “And I did teach every grade from pre-K to 5th grade with the exception of 4th grade. I thought if you want to say you walked in someone’s shoes, you want to be able to say, ‘I taught this before.’”

Melissa finally stepped into the administrative arena five years ago when she became the assistant principal of Coosa Elementary. Two years later, she became the principal.

Despite her professional achievements, Melissa continues to expand her skills, making sure she doesn’t lose sight of the classroom.

“I keep learning all the time,” she said. “I just went to the SCASA (SC Association of School Administrators) conference, and I’ll be going to Texas for SREB (Southern Regional Education Board).”

As much as Melissa values education, she also values relationships in the Coosa Elementary family. Believing her staff will perform their best if they want to come to work, Melissa goes above and beyond to engage and show appreciation for Coosa Elementary’s teachers, as well as bus drivers, cafeteria workers and custodians. “When we give something to one, they all get something. We feel like everybody is a teacher.”

During the recent summer break, Melissa planned optional outings on days when everyone was available as a way to foster connection and fun. The first event was a beach day, which had a good turnout. The second involved floating down the Edisto River—which required an hour’s drive—and had an even better turnout! The final event will be throwing axes at Moss and Hatchet. What a way to kick off the school year!

In addition to planned events, Melissa throws in surprises too.

“If they know something’s coming, it’s just not as fun! As my son says, ‘It’s the days you give gifts to people when they least expect it that they mean the most.’”

Her shows of appreciation haven’t gone unnoticed. In the Upbeat Survey, in which staff evaluate principals, Melissa has consistently scored high in all areas. When her score wasn’t as high as she wanted in the area of work-life balance, she took action. “I decided to minimize the number of after-school staff meetings and put things in an email or in a planning period.”

In another lower-ranking area—teacher salaries (which she can’t control)—Melissa did what she could and advocated for salary increases at a recent county council meeting.

The spirit of caring modeled by Melissa trickles all the way down to the classroom. Coosa Elementary teachers dedicate the first 20 minutes each day to team building, STEM, leadership and get-to-know-you activities. “It’s all about building family in the classroom,” Melissa explained.

Not surprisingly, coming out of the pandemic, Coosa Elementary’s scores in all three subject areas went up, proving her theory that when the staff wants to come to work and students want to come to school they perform better. In the Coosa Elementary family she nurtures, everyone truly does rise together.

Fear Be Gone: Though afraid of heights and flying, Melissa just enrolled in a course to earn her small plane pilot’s license! Her rationale: “What better way to conquer the fear than this?”

Yearn to Learn: Besides teaching and administrating, Melissa has also been an active realtor with ERA Evergreen Real Estate for the past 16 years, proving that her love of learning knows no bounds! While her job as principal is unquestionably her top priority and a role she carries with her all day, every day, she’s also interested in areas outside the classroom and fosters that same spirit of curiosity in her staff and students.