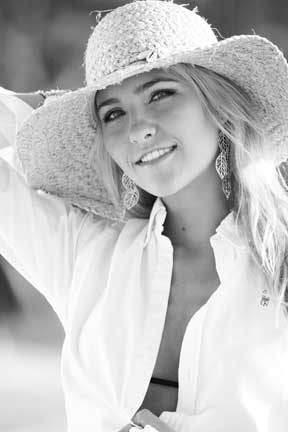 As a young girl, Megan Stoffel enjoyed watching televised beauty pageants with her family. The Stoffel family tradition continues today. In January, twenty-year old Megan made a special trip home from the College of Charleston to watch this year's Miss America pageant.

From an early age, Megan, like the character played by Abigail Breslin in the movie Little Miss Sunshine, knew that competing in pageants was something she wanted to do. At thirteen, she entered her first couple pageants and experienced that winning feeling. Speaking of her titles as Young Miss Jasper County, Miss Thomas Heyward Academy, and Miss Teen Jasper County, Megan said, "Although they weren't the most prestigious titles, the crown and banner made me feel so proud, confident and special. The feeling was almost...well, addicting."

After taking a five-year break from pageants, Megan decided to compete in the Miss Carolina Queen pageant last April, which she felt was good experience for the upcoming Miss South Carolina USA pageant. In November 2009, Megan placed first runner-up to Caitlin Upton, the former Miss South Carolina Teen USA whose widely publicized onstage stumble to the question about maps gained international notoriety. Later that month, she competed in the Miss South Carolina USA pageant where she took the advice of a professional coach. Unfortunately, because she conformed to her coach's wishes she did not perform as well as she would have liked. "I was not comfortable in my own skin. I was trying to be someone I wasn't, which hurt my chances," Megan said.

Megan, like many college students, is inspired by the trends she sees in fashion magazines and in the storefronts of Charleston's King Street. "Living on a college budget, it's important to incorporate one new trendy piece into my outfits whether it's a stylish necklace or a great pair of shoes." Megan agrees with Mary Kay Ash, founder of Mary Kay Cosmetics, who said, "While clothes may not make the woman, they certainly have a strong effect on her self-confidence - which, I believe, does make the woman."

When asked to reveal one or two of her beauty secrets, Megan said "To keep skin youthful and bright, occasionally add sugar or salt to your favorite cleanser to use as an exfoliating scrub." She also said if she only has one minute to spend on make-up, she doesn't go anywhere without tinted moisturizer and a touch of bronzer. Tinted moisturizer provides a hint of color and keeps skin refreshed, and a touch of bronzer gives a healthy, vibrant look. Megan's definition of style is "knowing who you are, what message you want to exude, and being confident no matter what anyone may think."

Last spring, for example, Megan decided on a whim it was time to get on an airplane and take her first commercial flight. She and two girlfriends flew to New York City, and although the girls were in the Big Apple for a mere sixty hours (only six of which were spent sleeping), they managed to see Broadway shows, haggle with vendors on Canal Street, purchase tacky souvenirs, go to amazing restaurants, eat cheesecake after every meal, and wait in line at 4am to get a good spot on the fence for "The Today Show" in Rockefeller Center.

Scheduled to graduate in May 2011 with a degree in Communications, this vivacious young lady has apparently inherited ambition to go along with her natural beauty. Megan's beautiful grandmother, Memie, has given her granddaughter noteworthy inspiration. "Don't sweat the small stuff and never give up pursuing your dreams." Which happens to be great advice for young ladies who compete for banner and crown as well as for those of us who are not quite pageant-ready.