Big Dreams in a Small Town 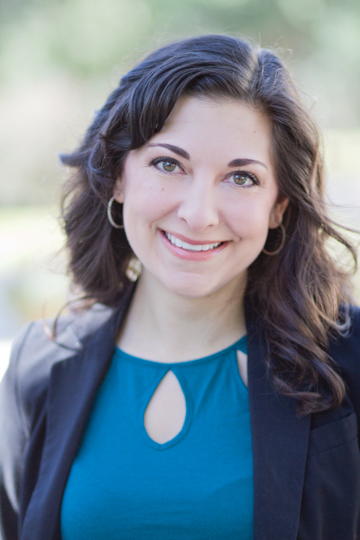 Megan Sears is a true Southern Belle, with dreams as high as the skyscrapers of New York City, and a head and heart as grounded as the small-town Georgia clay that she took her first steps on. Since she was five-years-old, Megan has dreamt of becoming a musical theatre performer, and at the ripe age of 27, she has already seen her dreams come true in a big way. Over the last few years, Megan has travelled all over the country with roles in productions such as "All Shook Up", "Annie", "Macbeth", "Big River", "High School Musical", "Joseph and the Amazing Technicolor Dream Coat", and many more. However, when I had the pleasure of speaking with her, what she spoke of was not her many adventures and accomplishments, but how blessed she was for the opportunities she has been given, and how grateful she is to have the never-ending support of a wonderful husband and family.

"I always knew I wanted to be a performer. My mom tells stories about me singing and dancing in restaurants at the age of two. At some point, someone told my parents they had to get a video camera, so there are literally hours of footage of me performing," Megan recalled. Throughout her youth, Megan participated in dance and voice lessons, so by the time she entered high school, her goals were solidified. As a senior, Megan was named Georgia Junior Miss-an experience, which despite the obvious contradiction, helped aid her with her fear of public speaking. "As Junior Miss I travelled all over the state and spoke in front of people. There is a big disconnect between me playing a character onstage and being myself in front of a crowd. It's funny, but to this day, one of the most nerve-racking things for me to do is sing in front of church!" Megan admitted.

Megan graduated high school as valedictorian, went on to get her degree in Musical Theatre Performance, began acting in regional theatres, moved to New York to find larger opportunities, and her career has continued to move forward from there. "A big motto of mine is to not live my life with regrets. I can always go back and do something different if this doesn't work out, but this is my time to be selfish."

Megan just finished acting in her first film in Atlanta in February - an indie movie called Break Lights, where she plays a medical student named Erica trapped in a hijacked van. Although she admits she prefers stage acting to film acting, she is grateful and eager for any opportunity to try something new. "You have to have goals, but at the same time, you have to be open to opportunities. So many times I've said yes to an opportunity that opened the door to so many more. I know I'm only 27, but the truth is, most people have dropped out of the industry by the time they reach 27. Rejection is the name of the game. You have to have inner strength and not let personal emotions get in the way of opportunities."

A big part of the inner strength that Megan radiates is because of the overwhelming support of her family, especially her husband, John. John and Megan spent most of their three-and-a-half year relationship long distance due to the travel requirements of the acting industry, and John's career as a Chaplain in the Navy. When they married in October, the couple "settled down" in Beaufort, but they have accepted that their marriage will never be what most consider "normal". "He is definitely my biggest fan; he told me at the very beginning of our relationship that he would never expect me to give up my dreams, and would always support me, and he always has. He jokes that his dream is for me to become rich and famous so he can be a house husband. It's just a joke, but knowing he believes in me that much, makes me feel like anything is possible."

Truly, anything is possible for a bright and talented girl with the world in front of her and her heart in the right place. When I asked Megan about her goals for the future, her response was simply to make a living doing what she loves, to always balance her personal and professional life, and to remain open to any unexpected opportunities that may come her way. "I hate to have a structured plan, where if something doesn't happen, I will feel unfulfilled. I have had such unexpected changes happen in my life so far, and they've all been for the best. I would like to someday try writing or directing, because I like the creative process of creating a world and the characters to go in it. I am just here to enjoy the experience and adventure, and see where it takes me."

Up Close:
Current Gig: Megan's next role will be as Irene Roth in "Crazy For You". She will perform at the Alhambra Dinner Theater in Jacksonville from March 20-May 5.
Strong roots: Megan came from the small town of Thomasville, GA. Her family includes: Parents, Allen and Diana Cone; Sister, Lindley; Brother, Chad
On making long distance relationships work: "Find things you can do together, even when you're apart, so you can stay connected."
Hobbies she and John enjoy doing together: Learning to play guitar, swing dance lessons, "binge" TV show-watching, reading, card games, cooking
Words to live by: "Twenty years from now you will be more disappointed by the things that you didn't do than by the ones you did do. So throw off the bowlines. Sail away from the safe harbor. Catch the trade winds in your sails. Explore. Dream. Discover." Mark Twain