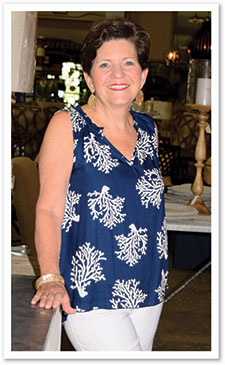 Mary Tatum is an outstanding example of a person who inspires others and makes a difference. When her friends or family are struggling with problems, she not only encourages them, she also tries to comfort them by sending her favorite message of hope from the Bible, quoting Isaiah 41:10: “Fear not, I am with you; do not look around you in terror, and do not lose courage for fear of what may happen, for I am your God; I will strengthen you, I will help you.”

In her animated, charming Southern accent, Mary exclaimed, “My grandmother Mary Esther was the most influential person in my life.” Her life was a shining example for Mary to emulate because her faith extended well beyond going to Sunday school and church and she exhibited a strong belief in the power of daily prayer. “She lived her faith and was full of life,” Mary said.

Mary was born in busy Columbia but spent summers with her grandparents in the small South Carolina town of Bamberg, where people walked almost everywhere. “I had the best of both worlds and a lovely childhood. My grandmother not only positioned a deep prayer seed in me, she ignited future interests,” Mary said. With her keen eye for design, Mary’s grandmother took her to interior design shops, sparking an interest that would later become an integral part of her life.

After working as a medical social worker at Providence Hospital in Columbia, Mary met a minister who hired her as the special ministries coordinator for Washington Street Methodist Church. The two started the first soup kitchen in South Carolina and from 1977 to 1980, the kitchen made a big difference in the lives of the homeless in that area. “It was a beautiful and exciting time,” Mary said.

In 1980, Mary married John Tatum, and two years later, they moved to Beaufort to appease their love of the beach and the idea of coastal living. While her husband built his law practice, Mary established herself as a permanent volunteer at First Presbyterian Church, where she eventually became a deacon and elder.

A stay-at-home mom for their two children, John IV and Christy, Mary said as they grew older, she “fell into so many opportunities. The interests sparked by my grandmother emerged and I helped friends with the interior design of their homes. It was just a fun thing to do.” However, when she met Carol Waters, owner of Waterside Place interior design store, her hobby started to transform into a career. Mary began working part time, handling the technical end in fabrics and furniture. She and her colleagues became close friends and learned from Carol about buying at market and the aspects of design. “Those were Camelot days,” Mary said. “We did not want to leave work, and for over 10 years, we thrived together!”

Mary started Tatum Designs, but her Camelot days ended when her oldest child suffered severe medical problems and underwent several serious surgeries. After months of prayer, loving care and support for her family through extremely frightening times, Mary’s world returned to normal. “Once again, I fell into a wonderful opportunity, this time with the Beaufort Grayco store. When the store expanded into furniture and accessories, Mary was hired to merchandise those areas.

Always energetic and smiling, Mary is a bright light to her two young grandchildren and to those who attend her Bible and prayer classes. Her motto is “Loving it forward.” Mary was such a joy to be around, I asked her what is her secret to her contagious, positive outlook on life. “It’s the way I am,” Mary said. “I consider my nature to be a gift from God. Everyone has a gift. We simply need to make them aware of it.”

Surprise: “I enjoy life so much; it may surprise people I was a religion major in college!”

Most Poignant Memory: “While walking with my father, he suddenly ran into the middle of the street and risked his life to pick up a man everyone else stepped over.”

Most Precious Gift: “To have been raised with a loving Christian family, who gave me the basis of who I am today.”