A Legacy of Welcoming All 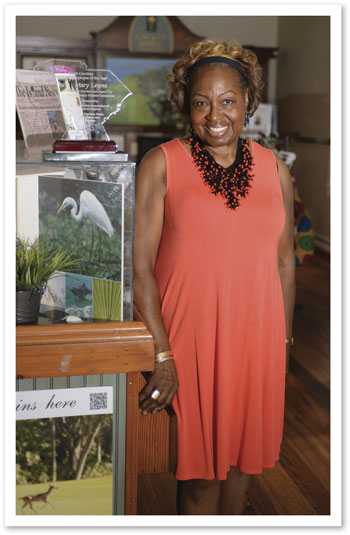 Born in the Coffin Point community on St Helena Island, Mary now lives a short distance from the bridge that connects downtown Beaufort with Lady’s and St. Helena Islands. Mary’s life has taken her on a journey through Harlem in New York City to Detroit and back home.

Mary moved to New York when she was 9 years old. Later, life took her to Detriot. The Detroit riots of 1967 led to the launch of many African American businesses. Mary worked for the president of First Independence Bank of Detriot, founded in 1970 and African-American owned. Her career path continued and landed her a position at Ford Motors, where she worked for 16 years. While with Ford she earned her B.A. at the University of Detroit. She later moved on to work for the UAW for another 10 years. Then in 2005, she had the opportunity to take a golden parachute and retire.

Mary sold her home in Michigan and made her way back to the place she called home as a child—Coffin Point. Many people, especially newcomers, think Coffin Point is a morbid name. Mary explained it does not refer to a literal coffin, but actually was the name of the plantation that once sat in that location.

On one of her visits to the Center, the manager told Mary an employee had called out.  Mary offered to help, and that is when her role as Information Specialist at the Beaufort Welcome Center began. She is regarded as a local Gullah culture historian and is known for her outstanding customer service, too. Both her warm personality and local knowledge has made her a huge asset and great representative to all who meet her.

Mary was named 2019 South Carolina Hospitality Employee of the Year at the Governor’s Conference on Tourism and Travel this past February. Governor Henry McMaster presented her this esteemed award, which recognizes her significant contributions to tourism in South Carolina. Anyone lucky enough to spend time talking with Mary can understand why she was chosen for this honor. She exudes warmth, a sense of humor and puts everyone at ease.

When tourists stop by the Welcome Center looking for advice on what to see during their trip to Beaufort, Mary’s first question is, “How long will you be here?”  Depending upon the answer to that question, she gladly lists the “must-see’s” during the visit.

A one day visit includes six locations, which Mary feels give the essence of Beaufort, and she adds to the list based on the length of the visit. The six “must-sees” are:
• The Beaufort Historical Museum
• The Parish Church of Saint Helena
• John Mark Verdier House on Bay Street
• Saint Helena History Center
• Reconstruction Era National Historical Park
• A walking tour, carriage ride or van tour of the historical homes
on The Point in Downtown Beaufort

Mary’s expertise on the Gullah culture has also gained her a spot on the lecture circuit.  She has given presentations at the University of South Carolina, Penn State University, and to a variety of other organizations. Active in the community, she has served in multiple cultural, planning and preservation leadership positions in Beaufort, including serving twice as president of the Penn Club, a non-profit organization that supports Penn Center. 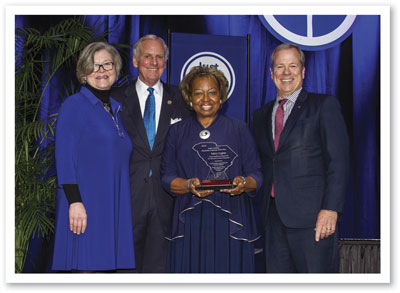 On April 15, 2019 Mary’s expertise reached a world wide audience, as she was featured in the Travel Section of a Sunday edition of the New York Times in an article entitled: “Searching out the Hidden Stories of South Carolina’s Gullah Culture.” In the article, Mary talked about the land on Coffin Point her family has owned since the end of slavery, the Praise House she has worked to maintain and her concerns that those who embrace the Gullah culture are aging.

Mary’s passion for her legacy is both admirable and respectable, and in asking about her life’s philosophy, it is evident her Gullah wisdom runs deep: “Life is full of a lot of bumps and curves. How you handle the adversity and hard times is what matters. The teachings in the Bible are important for us to endure. Have peace and joy in your life.”

If you would like to read the New York Times article, search Google for “New York Times Mary Rivers LeGree” or type in the following web address: www.nytimes.com/2019/04/15/travel/south-carolina-gullah-geechee-low-country.