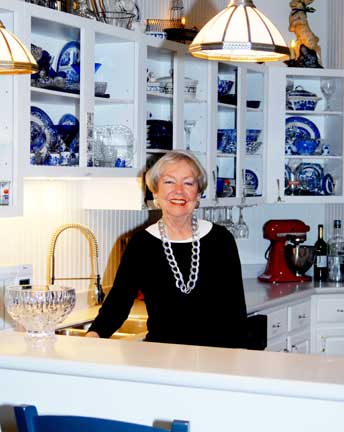 If the sponsors of Pink Magazine's 2009's Dream Big, Live True conference had awarded diplomas for ambitious attendees, Mary Mason would have graduated with honors. Exactly one year to the day after attending the inspirational one-day seminar designed to motivate women to dream big and live true, Mary held in her hands the fruit of her inspiration, a book she wrote and published called The Ambassador of the 14th Hole - The Inspiring Story of Matthew Jarrett Mason.

"I saw all kinds of women at the conference and thought if they can get excited and do something great, so can I!" Mary said speaking of how she came home determined to tackle her dream of writing a book. She wanted to tell the stories of how her now forty year-old son Matt, born with Down's syndrome, positively affects people with his cheerful attitude and Godly character. Without the benefit of a degree or even a simple typing class, the process of writing and publishing seemed a bit overwhelming, but Mary knew God's hand was on this boy and would be on her book as well.

Mary relied upon her favorite Bible verse, Romans 4:17, for encouragement: "...the God who gives life to the dead and calls things that are not as though they were." While living in Jacksonville, Mary had taken a writing class, but it wasn't until years later that she  was able to outline the book and begin writing the manuscript.

When Mary was a young mother of three, someone in her community asked her to become a part of a group for children with special needs. At the time, Mary was not amenable to the idea -- at all.

"I was destined to have Matt," Mary said with delight. Matthew, born one month pre-mature, came into the world with serious heart problems. Mary and her husband Dick already had their hands full raising three older children when they were suddenly faced with additional challenges.

"We had to deal with all of this 'BG' - before Google," Mary said pointing out that they didn't have access to information like people do today. Despite pessimistic projections given by doctors, the Masons overcame Matt's precarious start in life and went on to experience a lifetime of extraordinary blessings. At age 14, Matt was accepted at the Benedictine School for Exceptional Children in Ridgely, Maryland, where he is a resident today except when he comes to Hilton Head for vacation.

Like father like son, Matt is an official Verizon Heritage golf tournament marshal, one of the 450 or so volunteers who keep the crowds at Harbor Town Golf Links quieted. He has been an outstanding volunteer for the past five years. Matt's notoriety stems from his warm hugs and ability to schmooze tournament pros and officials, as well as every person he meets.
Mary also volunteers at the Bargain Box and is a Rotary Reader at Hilton Head Elementary School. She also facilitates a Bible study at Tide Pointe and has aspirations of one day, at age 80, becoming a personal shopper. "I have the gift of bargains," she joked.

The Ambassador of the 14th Hole covers Mary's forty-year journey as a parent of a special needs child in short snippets, but she plans on sharing many more words of encouragement with parents of special needs children. Her book can be purchased at Burke's Pharmacy, The Pink House Gallery, Sea Pines Country Club and Palmettoes. Or visit with Mary at her book signing on April 9th at 1pm or 5pm at Tide Pointe on Hilton Head Island.

Married: 59 years to Richard Mason
Children: Michael (57), Kim (55), David (50), Matthew (40)
Homes: Retired to Sea Pines from Wilmington, DE, and lived in Jacksonville, FL before becoming full-time residents at Tide Point
MAC or PC: Only ever had one computer, which had to be the same as her writing instructor, an Apple.
Loves To: Cook, not bake.
Future Plans: Painting, genealogy and personal shopper.