A Rising Star to Watch 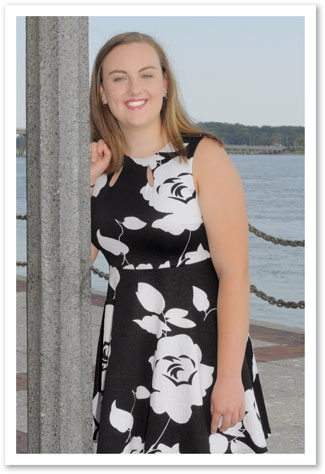 Mariah Midyette is 15 years old and already on her way to becoming a doctor!  The Beaufort teenager was honored in July with an invitation to attend a conference sponsored by Harvard University for promising students interested in health care professions. The three day The Congress of Future Medical Leaders was held in Lowell, Massachusetts, and was designed to offer outstanding high school science students — “teen medical prodigies” according to the press release — the opportunity to come together to meet with professional mentors and professors who can advise them.

Mariah had a ball! Her favorite part of the Congress was watching an actual surgery, a hysterectomy, performed by a surgeon who was assisted by a robot. Mariah and the other attendees watched the surgery in a stadium, and even munched on complimentary popcorn! Although the surgeon had warned that watching the surgery might make some of young students a little squeamish (seeing the blood and internal organs of a real person), Mariah wasn’t bothered in the least. Before attending the Congress, Mariah met her fellow attendees on social media in a private Facebook group setting, and says it was lots of fun to meet the other students in person. A field trip to the Harvard campus was another highlight of her trip, and it made a lasting impression on the future physician.

A rising sophomore at Beaufort Academy, Mariah attended Riverview Charter School in her elementary and middle school years and fondly recalls a special teacher there. Donna Moore taught science and made it come alive —even when they were studying rocks, Mariah laughs. “She pushed us all to the next level.”

Mariah is a middle child, coming right after her older brother Parker, who is 16, and before younger brother Gavin, who is 12. She also has two married sisters, Sarah Cornett and Chanelle Tallmage, and lots of nieces and nephews. Her mom and dad, John and Heather Midyette, have raised each of their children to be unique, while encouraging their natural abilities. The family lives in Pleasant Farm on Lady’s Island, and Mariah says she has had the same bedroom since she was born!

Mariah currently has a 4.5 GPA thanks to advanced placement courses, but she says she doesn’t spend all her time studying. She’s on the varsity basketball team and a member of the Interact Club. She has also been invited into the Torch and Laurel Society, due to her high GPA and extracurricular activities. She sang with BA’s chorus, the Blue Notes this year, and hopes to get involved in the drama department next year. Mariah has also signed up to be on the yearbook staff, and admits she works at having a well-rounded academic and social calendar.

The bubbly, busy teenager also enjoys horseback riding, even finding time to compete in horse shows. Horses are such an important part of Mariah’s life that her long term career goal is to become a large animal veterinarian rather than a “people” doctor. “My mom says I like animals better than people,” she laughs. “And maybe it’s true.”

Where does Mariah plan to apply for her undergraduate degree? Harvard, of course; even with the school’s well publicized 4.5 percent acceptance rate, Mariah is making it her first choice. The staff at Harvard’s admissions office is obviously on the ball, creating events like the recent Congress of Professional Medical Leaders to attract the “best and brightest” in the country to their school, and Mariah plans to attend the conference again next summer. “It will look good on my application to Harvard,” she reasons, and she also wants to continue her friendships with the peers and mentors she met this summer. Look out Harvard, here she comes!

Just for fun: Goes boating with the family. Hangs out at the horse barn, and rides as much as possible. Enjoys meeting up at the neighborhood pool with her friends.

Favorite food: Sushi—doesn’t matter if it’s at a Japanese steak house or from the grocery store.

Favorite Beaufort Water Festival event: The Talent Show! She and her friends are talking about getting an act together for next year’s festival. They enjoy hanging out at the annual show and watching all the talent.

Great advice she gave me: So that she would recognize me when we met at the coffee shop for our interview, I described myself as a grandmotherly type, with grey hair and about 20 pounds I need to lose. Her text reply was priceless: “Haha! Stop. You need to talk positive about yourself! Isn’t Pink all about empowering women?!!!”
Thanks, Mariah!  You are SO right!