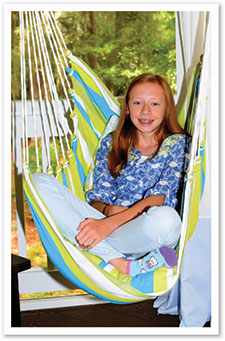 With creative images dancing in her head, young Mallory Russell began her search for the perfect recipe. With visions of college scholarship money, her family jumped at the opportunity. The fantasy-invoking opportunity was a contest sponsored by Jif peanut butter in 2011 that requested recipes for “The Most Creative Peanut Butter Sandwich” from kids 6-12 years old.  Mallory’s maternal grandmother found out about the contest and alerted the family.

“I love peanut butter, and my dad is a good cook, so we experimented with all sorts of peanut butter combinations,”  11-year-old Mallory told me happily.

Mallory and her twin brother Lathan were born seven weeks prematurely and spent the first month of their lives in the hospital in Charleston. Today the twins enjoy Hilton Head and their healthy, busy lives are filled with hopes and dreams. Mallory has already realized one of them.

While Tucker, one of three four-legged friends, nuzzled me with gentle paws for a pat, blue-eyed Mallory quietly explained her Jif adventure. “I don’t know how many sandwiches we tried on Mom and other people, but we finally came up with one we thought was good enough to enter,” she said. “We called it ‘P-Nutty BBQ Chicken Quesadilla.’”

“We did not know what to expect,” recalled her dad, Chris, a former Navy band drummer. “We were surprised and ecstatic to learn from Jif that Mallory, chosen from entrants across the country, made it to the top 10!  We decided to try for the top five and the trip to New York. In January 2012, Jif offered several weeks of online voting. The minimum age was 18, and all our friends voted for Mallory!” Chris is the  drummer for the popular Deas-Guyz band and everywhere Deas-Guyz played, Reggie —original founder, band leader and lead vocalist—let Chris announce his plea to vote for his daughter, Mallory in the Jif contest. In March, the Russell family received word Mallory made it to the top five.

The family was picked up at home by a limo and flown to New York for three exciting, whirlwind days.

Mallory, along with the other four finalists, had her recipe prepared by a professional chef and presented in its most perfect light to the panel of judges, consisting of four women.  Bubbling with shy energy, Mallory twirled one strand of her sandy blond hair around her finger. “We had a rehearsal for the show,” she said, “and I was very nervous! The judges asked us to explain how we made our sandwich, they tasted each one and then we waited for their vote.” After one stressful hour of anticipation, Mallory, who was 8 at the time, was awarded Jif’s first prize, a $25,000 scholarship, plus a surprise bonus of an additional $10,000 in celebration of the 10th anniversary of the Jif contest. “We could hardly believe it!” grinned Chris, glancing proudly at his daughter. He said, “Mallory showed an interest at age 6 in baking cookies and cakes and loved trying recipes. The contest was perfect for her and it just all worked out!”

That was not the end of rewards. That April, the Russells received a call from a producer to have Mallory appear on "Figure It Out", an American children’s panel game show which aired on Nickelodeon at the time. The game was to “figure out” the contestant’s talent.  The Russell family  accepted the invitation and flew to Los Angeles. Because none of the panelists could guess Mallory’s talent, she won an electric guitar in the first round. Advancing to the final round, she stumped them once again and won a trip for the family to beautiful Mammoth Lakes, Calif.

Recalling her Jif experience, Mallory quietly offered, “I was more mature than most 8 year olds. It was fun to make stuff and I felt privileged to win.” Mallory is interested in architectural design and may pursue it as a career. Meanwhile, she is busy with cross country track and has worked up to running six miles at a time. She has learned independence, the value of hard work, persistence, and as her dad puts it, “To roll with it and enjoy the moment. It’s very important to be honest and true to our children; give them our trust and teach them the realities of life. We know there are challenges every day, and a good attitude toward the world helps us realize, when one door closes another one opens!”

Favorite author: Ransom Riggs. “His Miss Peregrine’s Home for Peculiar Children book is not boring like some.”

Next goal:  A cookbook for children

Mallory’s Motto:  “Don’t ever let anyone tell you you cannot do something!” 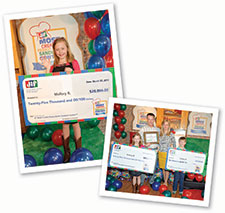