Prince Charming and His Cinderella 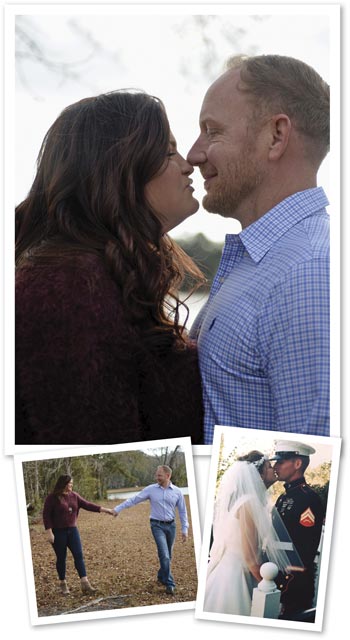 Lynnette and David Thompson are a couple married for 23 years who are still sweethearts and Valentines. They sat on their couch after David got home from work and told their sweet story together. They reminded me of teenagers “going steady.” It’s not been a time without struggles and difficulties, but they have made it through together.

The couple met in May,1996, while attending the Fire Academy in Texas in hopes of becoming firefighters. David noticed the pretty 19-year-old immediately, and when he was selected as president of the group, he chose her as his vice president, “mostly to get to know her,” he admitted. He had just gotten out of the USMC, was 23, and looking for a new career.  She didn’t instantly like him. He seemed arrogant and came across as a “know it all,” having spent the last four years as a Marine, and said everything in the training was “too easy” for him. It took him three months, but he convinced her to go out.

Their first date was to a country music dance bar. He was smitten and told her: “I’m gonna marry you one day.”  Lynnette was shocked, and replied, “Slow down. Why don’t we just date?” They had dated about a year when Lynnette had a scary medical issue out of the blue in February,1997. Her facial muscles froze, she had trouble swallowing, and she couldn’t squint her eyes. After many doctors, there still was no explanation.

David was frantic, as were her parents. Neither of them had medical insurance at the time, and the situation was terrifying. David had not been able to secure a fireman position yet and was so concerned about his girlfriend that he did the most reasonable, logical, loving thing: he re-enlisted in the Marine Corps so his girlfriend (and hopefully soon-to-be fiancé) would have medical benefits.

On May 31, after a four day engagement, David and Lynnette were married in a small family ceremony. Lynette was tiny, having lost 20 pounds since the onset of her condition.  She said little, because it was difficult, and she was exhausted most of the time, but she said “I DO”, and their journey began. David was almost immediately transferred to Japan, an unaccompanied assignment.

Back in the States, Lynnette’s condition worsened, but now she had a military spouse’s ID card, so she was able to go to a Department of Defense walk-in clinic. It was crowded, and she waited all day, without seeing anyone. At the end of the day, the nurse advised her to come back the next day, and she broke down crying. A doctor heard her, admonished the nurse for putting her off, and took her to the examining room. He immediately referred her to a neurologist, and after many tests and much worry, finally Lynette had a diagnosis:  Myasthenia Gravis.

According to WebMD, Myasthenia Gravis is an autoimmune disorder caused by a breakdown in communication of nerves and muscles. There is no cure, only treatment with steroids and surgery. Symptoms can range from mild (drooping eyelids) to life threatening (difficulty breathing).
Over in Japan, the young Marine who had just gotten married and shipped out immediately was worried sick. This was before cellphones or Facetime; international phone calls were expensive. They wrote many letters, as they were only able to talk once a week. They still have the handwritten love letters that went back and forth during that time. Their love is like those letters—never fading.

Lynnette has been able to manage this disorder quite well over the last 23 years, giving birth to two healthy baby boys and having a career as a flight attendant with Southwest Airlines. “Thanks to David,” she said, “He saved my life.” But, he says she saved his life: spiritually (helping him find a faith and a church home), being a loving wife, and giving him two children. The boys are in college now: Trent is 21 and a senior at University of South Carolina, Columbia, and Lance (nicknamed Sir Lancelot) is a freshman there. The two share an apartment.

Lynette and David, now empty nesters, are excited about where their journey will take them next! No matter what the future holds, though, they both declare they would do it all over again. There isn’t a day that goes by they don’t thank God for each other. This is a modern day fairytale love story, only with a real Prince Charming and his Cinderella.

When I asked for tips for a happy marriage, David was quick to tease: “The wife is always right! Remember that!”  Then he added a little under his breath… “most of the time.”

Tips offered together:
• Pick your battles carefully.  Ask yourself “Is this really worth arguing about?”
• Have a shared checking account. Hmm. Sounds like another story.
• Communication is everything. Talk everything out.
• Never go to sleep angry with one another. Their boys have learned this one, as well.