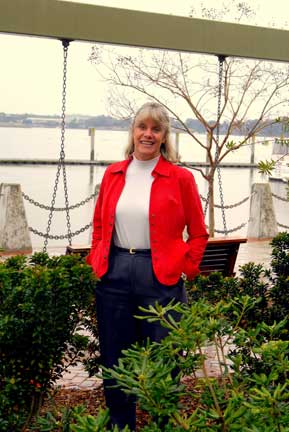 Have you ever strolled around the city of Beaufort and taken in the beauty of the winding paths lined with gorgeous flowers and greenery? Have you spent an afternoon watching your children play joyously at one of Beaufort's public playgrounds and been grateful for the chance to get out of the house? Have you ever escaped from the heat of a summer day under the shade of a big tree down by the river? If you have done any of these things in Beaufort, there is a good chance Liza Hill is partially to thank.

As the City of Beaufort's Park Superintendent, Liza and the rest of her crew are responsible for renovating under-utilized spaces and turning them into areas the public can use such as parks, playgrounds, sports facilities, open spaces etc. "From a female design perspective, I love taking something basically useless and turning it into something that the public can- let me rephrase that- that the public wants to use," Liza said.

As one would imagine, the timeline of turning an empty space into something useful can sometimes become pretty lengthy. The process begins with surveying a space, coming up with concepts, talking with the public about their needs and working with others to decide how to best utilize the area. Consideration is given as to how to circulate traffic, whether there will be play areas, pet parks, places for entertainment, as well as the different elements that will need to be included such as plants, benches, sidewalks etc. "The beginning is always so exciting because I get to start with a blank piece of paper," Liza beams. "Of course there is a rule book you have to follow, but outside of that I basically get to play!"

Liza described the middle of the process as being much slower due to the paperwork and the nuts and bolts of the project, but things pick up again after the contracts are signed and everything starts to come together. "There's a landscape architecture term 'off the board and into the ground,' and watching the whole process unfold is what is so great about this job," Liza said. "There's always a huge sense of pride when a project is finished, but also some sadness that it's over."

Although Liza loves her job now, she admits that it took her a while earlier in life to decide what she wanted to do. She attended two different universities, one in Virginia the other in Florida, and received Bachelor's degrees in Speech Pathology and Horticulture before her third degree led her to her true passion, Landscape Architecture. "I also studied art in college and I have always loved the outdoors. Landscape architecture seemed perfect because it was a marriage of these two things," Liza said.

Liza traces her love for the outdoors back to when she was a child, growing up on a family farm north of Atlanta in a place called Coosawattee. "When you are a kid growing up on a farm you are outdoors all the time! I was too young to really help out with anything but oh, was it a great place to grow up," Liza recalled. Liza moved to Washington D.C. at the age of 12, then later to Atlanta where she met her husband, also a landscape architect, whom she married in 1992.

In 1996 Liza was blessed to have a son, Max at a very late age. Now at the age of 58, Liza's life is only getting more interesting. "I love what I do and I plan to keep doing it, but there are plenty of other things out there I enjoy doing as well. My biggest joy is working with my son, which has led me to realize how much I love teaching," said Liza. "I'm not looking for a dramatic change, but I think everyone needs to constantly look to see what other colors you can bring into your life."

Grew Up: On a farm in Coosawattee, which is a Native American word for "quiet waters"
Adjusting to city life: "I had only ever had fresh milk from a cow and I never knew there were different kinds of milk. It was a huge culture shock for me the first time I tried 2%!"
Worked as Beaufort County Park Superintendent for:
7 years
Before that: Worked with her husband from 1992-2003
Can't wait for: Easter weekend when she and her family will go back to her family farm to go camping