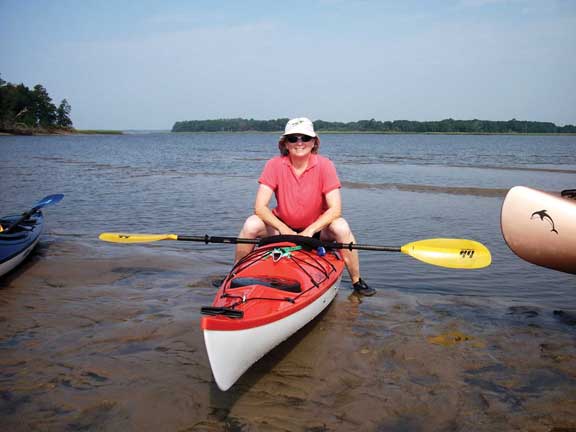 Linda Etchells wasn't born with the nickname "Gatorgal," but I imagine if she had a nickel for every time a person inquired as to its origin, she would be rich. I didn't want to be that annoying person. Still, when we first met, that question bolted right out of my mouth. She sat back calmly and grinned-bemused more than challenging-and answered, "I guess people think I'm fixated on gators." She's a storyteller who knows just how to draw you in.

Before Linda moved to the Lowcountry 22 years ago, she had a different life. She lived in Northern Virginia. She was married. She had a successful career working for the Marriott Corporation Restaurant Division. At the time, Marriott owned the Roy Rogers fast food chain and Linda was responsible for employee training. Marriott decided to get out of the fast food business and sold the chain in 1990. Linda was offered a transfer or a one-year paid severance.

She took the severance. She and her husband moved to Hilton Head. She had always been a sports and nature enthusiast. Talking about her childhood in Erie, PA she describes herself as an "independent tomboy," who loved being on the water. Here in the Lowcountry she discovered something new: kayaking. In the beginning she paddled with the "Lowcountry Paddle Club" (now defunct). She wasn't ready to retire so she got a job working with Matt Edlin at Oyster Reef Golf Course, and followed him when he was named Pro at Hidden Cypress Golf Club. As his assistant, she now runs the pro shop. But kayaking is what she loves and where she spends her free time.

She tells me that she and her husband separated. "I let him keep all the toys; I only wanted my kayak and paddle.

Another life began. Almost anyone who knows anything about the kayaking world around Hilton Head and Bluffton has heard of the "Swamp Girls Paddle Club."* The founder, Susan Chapman-whose moniker is Swamp Boss-became Linda's closest friend and partner. Linda's face, eyes and hands, which are all engaged in telling the story, became even more animated as she talked about Sue. "She was called Swamp Boss because there was no question that she was the leader. But she was a slow paddler. When we went out I took the "fast" group and she took the slow ones." Linda talks about the beauty of being on the water at different times of day and night, through different seasons and seeing how the light plays on the water and landscape. She talks about the wildlife. She admits that she does love the alligators, and that by being respectful of their habits, she isn't afraid when they're near. She talks about local trips down waterways I know: May River; Savannah River; Colleton River; and others I've never heard of: Ebeneezer Creek; Lake Mayer; Raccoon Creek; New River. She talks about the house she shared with Sue on a quiet lake out in rural Jasper County. They loved their life. They loved kayaking.

She uses the past tense in referring to Sue. I know that Sue died of cancer on February 25, 2011. I know because there was a huge outpouring of community support during her battle and after her death. Linda and Sue united a huge group of friends (male and female) through Swamp Girls who continue to honor Sue through charitable fundraising for the American Cancer Society and "Relay for Life." Linda shows no visible sign of emotion when she talks about her years of being Sue's caregiver, but the quiet dignity that appears as she says "I just had to dig within myself," says everything about her strength and devotion.

When I ask if there's anything she's afraid of she laughs and says, "Heights." And then adds, "I don't know if I'm crazy or brave. I've just learned to mow through pain and fear." When she had both knees replaced five years ago she asked the doctor how soon she could be back in her kayak. He said, "Oh Linda, could you just wait until you get the staples out so you don't rust?" She waited 19 days after the first and 17 days after the second.

Her motto is "Make sure you live life to the fullest." In August, Linda and nine other ladies will kayak in the San Juan Islands off the coast of Washington State. I don't think they have alligators there, but I'm sure Gatorgal will make the most of it.

Up Close:
Goal: wants to educate people to protect, appreciate and "look at the beauty of what we have here."
Achievement: made the 10-hour kayak trip around Hilton Head Island, sponsored by Mike Overton of Outside Hilton Head.
Invitation: Public is invited and encouraged to participate in a civic clean-up of Pinckney Island on June 1, 2013 at 9 a.m.
Why Kayak? exercise; camaraderie; and beauty, or just for "paddling, pedaling, pubbing and palling."
*For more information go to: www.swampgirls.com; email: This email address is being protected from spambots. You need JavaScript enabled to view it.