Rescuing Racoons, Flying Squirrels and a Goat in a Wheel Chair 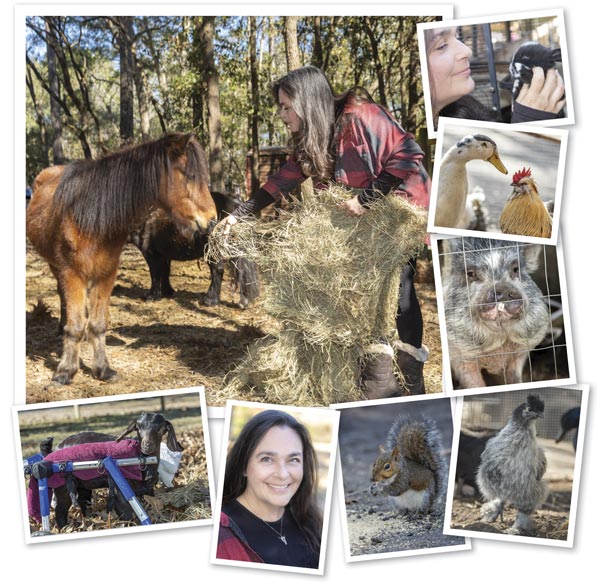 A silly little mouse is the reason Laura Sterling was up at 4 a.m. The mouse is tiny—it could easily fit in the palm of a 2-year-old’s hand—with velvety gray fur and eyes that still haven’t opened. Someone accidently disrupted its nest in their woodpile, and when the mother never returned, they brought the orphaned baby to Laura. Now it lives inside a dishtowel in a little basket on her kitchen counter.

“We always try to reunite them with their moms,” says Laura, a Fairfax, South Carolina native, whose mother also cared for injured wildlife and stray animals. “We raise them to release them; we’re not trying to make pets out of them.”

Her animal rescue and rehabilitation center, Laura’s Little Critter Barn, sits on five acres in Bluffton, where she lives and runs a tax service with her stepdad. She had already been fostering pets and farm animals for a few years before realizing the need to get funded, so she turned the operation into a non-profit and started rehabilitating wildlife, as well. The place has grown fence by fence, outbuilding by outbuilding. At the time of this writing it was home to three horses, seven pigs, eight goats, five dogs, four cats, two chinchillas, two ferrets, two guinea pigs, four squirrels, one baby flying squirrel and lots of bunnies, chickens and ducks.

Oh, and a goat in a wheelchair...but we’ll get to that in second.

On the cluttered porch of her office, Laura reaches down to a pile of feed bags and picks up a bathrobe covered in bits of straw, which she casually throws around herself to ward off the cold. She does a soft, tongue-rolling purr to pacify a sick raccoon as she offers it a dish of food, then starts telling about her recent battle with the SC Department of Natural Resources (DNR). Laura helped put together a petition with 77,000 signatures to oppose what she considered the “awful, controlling, squashing, oppressive” laws that DNR was trying to enact. Though intended to protect wildlife, she said, they would actually just make it more difficult to help by compounding everything with licenses, regulations, fees and problems.

“I went to DNR and said ‘Do you want to make your grandmother a criminal? Because you know your grandmother’s been feeding baby squirrels!’” recounts this eccentric, headstrong woman who has run for public office several times. “I believe in using care and caution, but when it gets to the point where you can’t get things done, it’s too much.”

The debate goes straight to the crux of Laura’s ethos concerning wildlife rehab: intention matters most. “Never, EVER beat yourself up over something that went wrong,” she says vehemently. “If you call me up and say you fed the baby squirrel breastmilk, and I say ‘Oh honey, that wasn’t the right thing,’ then you start crying, I’m going to have to tell you to stop. Because rehabbing and saving animals should be nothing but feel-good. You were trying to help, and if all you did was save that animal from the ants, and it was warm and loved and cared for when it died, you did a good thing.”

Which brings us back to Kit—the goat in the wheelchair. Kit had a spinal birth defect that made her unable to stand, so Laura found a little wheeled contraption meant for dogs and is currently working to place her in a home. “Kit’s had an awesome life,” she affirms while feeding the spunky baby a bottle of milk. “Even if we decided that it would be best for her not to continue, there is nothing sad about this story.”

Up Close:
What to Do if You Find Injured or Orphaned Wildlife:

Step 1: If possible, secure the animal without getting bitten or scratched.

Step 3: Don’t try to feed the animal. If you make a mistake it could do more harm than good.

Step 4: Thank yourself for caring!

To donate or volunteer: check out the Laura’s Little Critter Barn page on Facebook, or send her a direct message.