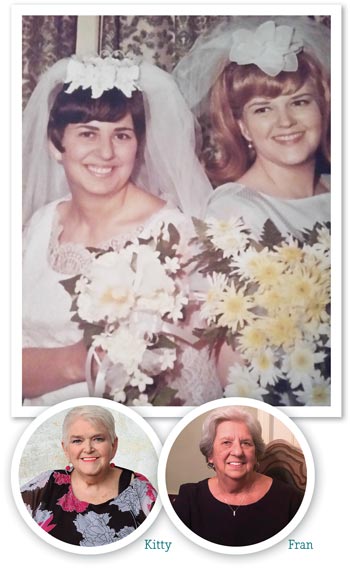 Kitty Price Wright and Fran Wise met in 1952, when they were in second grade in Salisbury, N.C. Their friendship spans nearly seven decades, 68 years to be exact. They have supported each other through thick and thin, from sharing their school and college years, to raising their children and grandchildren and going through the deaths of their parents.

Last February, Kitty received a diagnosis of breast cancer. She texted Fran to share the bad news, and Fran responded with a text that stated: “I can send the same text back to you. I got my diagnosis yesterday.”

“It was so ironic. I thought, ‘Oh my gosh, this just happened to me,’” Fran said.

Kitty told Fran, “We’ve been through a lot together, and we’ll get through this, too.”

She added that without a 3D mammogram, her cancer would not have been detected. She encourages every woman to insist on one. The two friends both had lumpectomies in March and are doing well.

“Fran is like a sister to me,” Kitty said. “Even if we don’t see each other for a while, we pick up right where we left off, as if no time at all has passed. Fran’s always been a part of my life.”

Fran agreed. “We are friends who when we get together, it’s like we’ve never been apart.”
Both women marveled at how people would often ask if they were sisters. “I don’t know why they would ask,” Fran said. “We look like night and day, but I guess it was because we were always together. Kitty described herself as a fair-skinned blonde with green eyes, and Fran is Greek with dark eyes and skin.

Growing up the two girls performed community service projects in the Rainbow Girls, a leadership and personal growth program under the Eastern Star and Masons. “In high school we did all the usual things,” Fran said. “We would go to the football games, have sleepovers and go to sock hops.” Kitty remembers spending many late nights hanging out at the kitchen table just talking.

Fran lost both her parents at a young age. She was only 13 years old when her father passed away and 21 when her mother died. “When my mom died, Kitty was there for me…through both deaths her family was always there. It is so nice to have someone who is really with you. I had plenty of family around, but it’s different to have a real friend outside of the family,” Fran stated. “I had to grow up pretty quick. Now I appreciate the opportunity to have watched my girls grow up and now I have grandchildren to enjoy. My mother didn’t have that chance.”

Fran added, “I hope Kitty feels that I have also been there for her. I know if I ever needed anything she would be there for me, and I wouldn’t hesitate to ask. It’s good to know that you’ve got somebody to call.”

“Kitty always stays connected,” Fran added. “Over the years we passed baby clothes back and forth, she helped when my first child was baptized, and now, my grandkids call her Aunt Kitty. She remembers everything—every birthday, every holiday, and she send cards to them and little packages for Halloween. She’s amazing! If you’re her friend she is 100-percent loyal and honest. There is no pretense with her and she never forgets anything.”

Time and distance never ended their friendship. Fran taught elementary school in Virginia, and now lives near Winston-Salem, NC. Kitty lived in Beaufort for 50 years, where she served as the head of finance for Beaufort County. She recently moved to Greenville to be closer to her children.

“We haven’t seen each other since February and COVID,” Kitty said, “but we usually meet, along with other friends, once a month to stay connected. I can’t wait to get back to a normal life and have lunch with my friends.”

“It’s great to have new friends,” Kitty said. “But old friends are the truly special friends.”