The Blessings of Hard Work 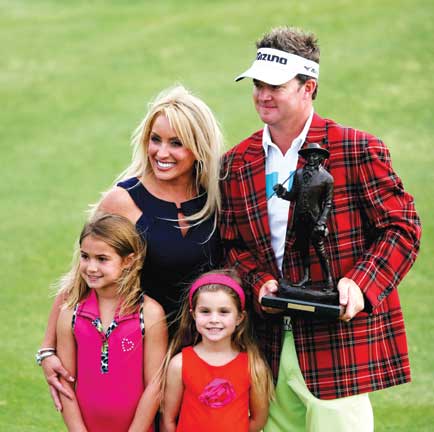 For Kimberly Gilmore Gay home is definitely where the four members of her family happen to be for the week. That doesn't mean that she doesn't actually have a beautiful home in Florida. It is a testament to her self-proclaimed dual life and how she balances life on the road and life at home and makes them seem almost one in the same for her PGA professional husband, 2009 Verizon Heritage Champion Brian Gay, and their two daughters.

Living life in the professional athlete arena, one may quickly be lead to think of the fame, fortune and frivolity of it all. But success did not come quickly or easily to this family. Being good in the sport of golf is very different than other sports. In fact, Brian Gay was the number one player for the University of Florida golf team the year they won the national championship, essentially making him the number one college golfer in the U.S. Yet it still took him five years after turning pro to make the PGA Tour and another 10 years before his first win - that's 293 tournaments of hard work, close calls and obvious disappointments.

Kimberly knew nothing about the game of golf when she met Brian at football's largest cocktail party - the University of Georgia vs. University of Florida smackdown. She was in the midst of building her career as a pharmaceutical sales representative at the time. "He tells everyone I asked him out," she laughed. Nonetheless that first meeting led to love, marriage, children and a very strong partnership. It may seem as though Brian is the one doing all of the work, but Kimberly is the anchor behind it all. Brian would agree as he has said multiple times in interviews that his wife is his biggest influence in golf.

"I manage everything. It's like running a company," Kimberly said. And there is a lot to manage. Especially with their two girls Makinley, age 10, and Brantley, age 5. Kimberly says her biggest challenge is keeping the family grounded in a very privileged lifestyle. Surprisingly, this life on the road provides a far more stable environment than one may think. For the children of PGA families there is a traveling daycare where the staff travels as well. Therefore, their friends and the same teaching team surround the children each week, providing for a very constant setting.

This life seems old-hat to Kimberly now, but "the first few years on the tour were a big adjustment." "At first it was hard to feel like you belong. I did a lot of shopping to not feel the void. Sometimes I felt worthless here and thought 'am I just keeping him company?'" Kimberly explained. Those days are long-gone. Married for 13 years and on the tour for 11, Kimberly is secure in her role as manager, social director, caring mother and loving, supportive wife.

She is also very involved with other PGA wives. For Kimberly, as well as many others on the tour with their husbands, it is important to give back and make a difference. As a group, these women work behind the scenes to empower women and support children. From the Arnold Palmer Hospital in Orlando, FL to the Target House in Memphis, TN, the PGA wives' goals include helping the helpless and helping women stand on their own two feet.

Although we did not discuss it, I can only surmise that both Kimberly and Brian are hoping for a repeat victory here at Harbourtown. However, this small-town couple strives to live in the now and not define their identity based on where Brian is on the PGA money list, but rather focus on the blessings of hard work. "It comes down to how much we really like each other. I love him and I want the best for him. It just takes perseverance. We like to stay very present and try to truly enjoy it all."