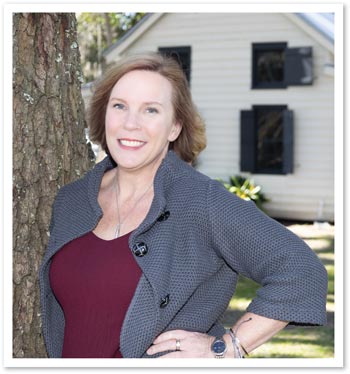 Spend a few minutes talking to Kim Jones and you’ll immediately detect her passion for the Lowcountry’s watersheds. As the Town of Bluffton’s Director of Projects and Watershed Resilience, Kim’s enthusiasm is contagious—even if you begin the conversation not knowing exactly what a watershed is!
In fact, let’s start there.

In simple terms, a watershed is a drainage basin that catches precipitation and directs runoff to a body of water. In the Bluffton area, watersheds send runoff to the May River, the Okatee and Colleton Rivers, and the New River. Maintaining healthy watersheds is essential to enjoying the recreational and economic benefits of our waterways.

Kim has been ardently speaking on behalf of our water resources for almost 15 years. Early in her tenure with the town, she spent a short time evaluating permits as “the tree person.” But with degrees in biology and ecology, Bluffton’s waterways quickly captured her attention—and her heart.

Today, Kim focuses on controlling pollution carried in water runoff as it moves over and through our watersheds. This contaminated runoff includes fertilizers, insecticides, sediment from erosion or development and bacteria from animal waste or faulty septic systems. When it makes its way into our rivers, polluted runoff compromises water safety.

While Beaufort Jasper Water and Sewer Authority (BJWSA) keeps a watchful eye on drinking water and wastewater, Kim focuses on keeping waterways healthy for recreational uses and shellfish harvesting, which is vital to the May River. “The May River is the backbone, the rallying point, and the heart and soul of Bluffton,” Kim said.

Although every inch of the United States is part of a watershed, Bluffton’s watersheds have special challenges, one of which is topography. The Lowcountry is predominantly flat. Because of this, a change in elevation as little as two inches can affect the direction of runoff.

Additionally, the curve of the coastline where Bluffton is located between Cape Hatteras and Cape Canaveral acts as a funnel. “As flood tide is coming in,” Kim explained, “it’s truly pushed into the area, which is why we have so much salt marsh. It’s also why our tides are so high.”

With sea levels rising, tides continue to increase. On average, the Bluffton area has about a seven-and-a-half-foot tidal variation daily, twice a day. “During new moons, full moons and spring tides,” Kim said, “the variation can be closer to eight-and-a-half feet. And during king tides … it’s not unheard of to see nine feet or more.”

King tides are the highest seasonal tides of the year. By comparison, a big king tide in Charleston is only about six feet.

Economic factors also add stress to the Lowcountry’s watersheds. Tourism is fundamental to Bluffton’s economy. Many tourists later decide to relocate here.
“The idea of people wanting to be near the water … it’s not unique to Bluffton,” Kim said. “But the town is still hovering around 54 square miles.” Our watersheds feel the impact of increasing population density.

When shellfish harvesting on the May River was stopped by fecal coliform contamination in 2009, the Town of Bluffton heard Nature’s call for help. With public input, they created the adaptive May River Watershed Action Plan, which continues to guide watershed protection today.

Additionally, the town is looking at development agreements governing future construction. Development can strain our watersheds but it supports local business owners and gives residents new entertainment and residential options. “It’s a double-edged sword … We’re looking at where can we best assimilate that growth … keeping in mind our natural resources,” Kim explained.

In her current role with the town, Kim also creates natural areas for the public. “People want to connect with the environment here. We need it for our souls, we need it for our mental health and well-being, and the town is here to help provide those opportunities and walk that line of respecting the environment and allowing people the opportunity to connect with it as well.”

Protecting watersheds in the face of environmental and economic pressures is no small task. Mother Nature and Bluffton are lucky to have a watershed whisperer like Kim Jones, who understands and speaks on behalf of the waterways, and the Town of Bluffton, as their champion!

Up Close:
Did you know… The May River is a tidal river—it’s like a finger of the ocean that pokes into the land and is fed by tides. This makes it especially sensitive to pollution because contaminants in the May don’t wash downstream as they do in other river systems.

We can all help Kim and the Town protect our watersheds. Here’s how:
> If you can, get involved. Team up with neighbors on April 30, 2022, for the May River Cleanup. Then mark your calendars for September 17, 2022, when South Carolina holds its largest one-day volunteer waterway cleanup event, Beach Sweep/River Sweep.

> Pick up after your pet. Pet waste is a major water pollutant and a source of pathogens like the fecal coliform that closed the May River to shellfishing.
> Have your septic system inspected every four years. Put it on a cycle with the presidential election so you don’t forget!

> Speak up. The Town’s work to protect the watersheds didn’t happen in response to regulatory mandates. It happened because you voiced your concerns and gave public feedback.

> Engage with the Town. The Town wants to support your interests as much as they want you to support theirs. If a local non-profit needs volunteers, reach out and see if Town employees can lend a hand.