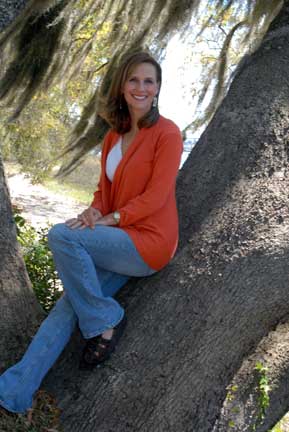 Alazy morning in pajamas, cuddling in bed with her two boys and three cats, reading books about dinosaurs or Egyptian mummies is Kim Durham's idea of paradise. Just as idyllic would be finding a new destination to explore with her family, or chaperoning a field trip to explore tabby ruins with preschoolers. Now more than ever, Kim savors all kinds of ordinary moments. Life for Kim became more precious after she had to find the words for what could have been her final good-bye speech for her loved ones.

A year ago, Kim almost died from complications from a pregnancy, which resulted in a miscarriage. "After many procedures and hours of trying to stop the bleeding, the nurses gave me a moment to speak with my husband, to say our good-byes. That's when I told Stephen what a wonderful man he was and how much I loved being his wife and mother to our sons," Kim said, speaking of how she came to terms with life's fragility. She also had to tell Stephen what she wanted him to tell their two boys in case the doctors weren't able to save her life.

If it weren't for a remarkable convergence of just the right medical personnel and dozens of people who donated blood at a previous blood drive, Kim might not have survived her encounter with a deadly clotting disorder called DIC (disseminated intravascular coagulation). Not long after the ordeal, a friend, a doctor at MUSC Charleston, expressed how he and his colleagues were surprised that she even survived. Small hospitals, such as Beaufort Memorial where Kim had surgery, do not typically have an adequate supply of blood on hand for such life-threatening cases.

"That's when it hit me," Kim said, "I was extremely fortunate that a Blood Alliance was established in my little town of Beaufort." The Blood Alliance is a non-profit community blood bank. Their purpose is to ensure communities have an ample supply of blood, sufficient to meet the needs of local patients. They currently have ten community donor centers and nine mobile units designed to support blood drives at businesses, churches, schools, civic groups, military, and community locations.

Acknowledging the fact that every day is a gift, Kim makes a big celebratory breakfast every morning so her sons, Collin and Brock, have ample time to talk before the day gets too busy for meaningful moments. She knows that as her boys get older, they are going to learn many of life's harder lessons, such as what to do when a friend breaks a promise, or a bully makes a troublesome threat on the playground, and even more importantly, the reality of children suffering in Haiti and across the world. Starting the day with conversation provides the Durham family with a foundation for such important concerns. "Their simple beliefs and genuine hearts continually amaze me," Kim said.

Recalling her own mother's devotion to family, Kim said, "We were priority number one. Momma instilled in me the notion that I could do or be anything I wanted." As a result, when her son tells her he wants to own the Lego Company when he grows up, she tells him that is entirely possible and he's just the right young man to make it happen. He also wants a little sister. Mom and Dad are making that particular dream come true. The Durhams have been matched for adoption and are preparing to welcome a baby girl this July.

"I cannot imagine a child losing his mother, or a husband losing his wife," Kim said. "No one should die unnecessarily if all it takes is showing up at a blood drive somewhere." To find out where and how to donate blood, go to www.igiveblood.org or join our local drive in honor of Kim Durham and M.C. Strong on May 19th from 5-8 p.m. in front of The Center in South Island Square Shopping Center.