The Moral of the Story 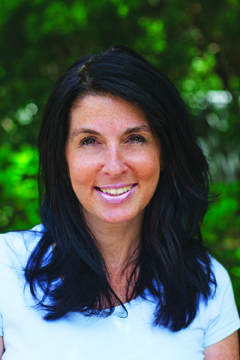 "I'm short and have dark hair," Kim told me in her thick, northern accent. She was relaying visual queues to spot her in a crowd at Starbucks. "Well," I responded in my faint southern drawl, "I'm short and have dark hair too, so we'll just be short together." We chuckled. When I arrived, a few days later, she was sitting at a small table with a delicious looking coffee. Her dark, ebony hair she told me about was indeed easy to spot and she was wearing a pretty layer of baby pink lipstick on, most importantly, a giant smile. Kim Schidrich, the woman from New York. She began telling me about her life and I listened intently, perhaps too intently, for my notebook boasts no more than a few scribbles. She came from a world I've never seen-a world that is noisy, fast-paced, crowded and functions by way of underground public transportation. A small town girl myself, I envy the motivated, driven personalities that seem to pour out of big cities. And Kim is no exception. To say that I didn't immediately fall in love with her because of her pink lipstick and voice inflections would be complete bull, but when I learned that she wrote children's books centered around strong moral lessons, my heart melted with the pride of knowing another woman. I was hooked.

Although Kim grew up in New York, like most people who find their way south, she vacationed here as a child and fell for the Lowcountry. I think somehow it just gets in our blood, all that plough mud. So, in 1999 she moved here with her husband, followed by most of her family. "So, I'm really lucky," she says of having her family nearby. But 1999 wasn't just the year that she moved six states south, it was also the year that she found out she was pregnant with her daughter, not to mention the year that she wrote her very first children's book titled, The New Puppy at the Pound. I think it's safe to assume that 1999 was a very big year for the Schidrich household.

The New Puppy at the Pound is told from the voice of Kassie the dog, named using the first initials of Kim's family members: Kim, Anna, Steve and Steven, and is a story about finding oneself in a new place and feeling a little frightened and lonely. I think as a child, we were all "the new kid" at some point, so I can understand why Kim would want to write on this subject. But more importantly, the story weaves in the idea that being friendly makes everyone happy.

Along the way, Kim has written five more books and is currently in the process of publishing the second one titled, Jasper the Giant. Since Kim is self-published, she is generating funds through kickstarter.com to begin publishing this next title. For different pledge amounts you receive unique benefits, such as a character in the story drawn to look like you or your children! Check it out by visiting the website and then search her name in the search window provided. You could help her reach her next book publishing goal and be a part of providing books to children that encourage kindness. "It's important to me that each story has a strong moral and virtuous implication," Kim declared.

What's important to note about Kim's book writing is that it was patiently cultivated. Like all things in our life that are good, they generally don't happen overnight, they evolve. Kim already has a day job as a lawyer at her family's firm, The Mangiaracina Law Firm, where her father and sister work alongside her. How she found time to write at all is beside me-I think it's the New York ambition in her (at least that's my excuse). It was 11 years after she wrote her first book that she published it as a gift to herself for her 40th birthday. I think the moral of this story is not to give up on your dreams!

The New Puppy at the Pound is in print! You can find it locally at Barnes and Noble or at the Bluffton branch library. It can be found online at barnesandnoble.com or amazon.com, so don't hesitate to give it a read!

Up Close:
Interesting Fact: "Every major event in my life has been marked by a hurricane or natural distaster."
Secret Skill: Fundraising! She has dedicated this skill to help raise funds for St. Gregory and Parris Island Young Marines.
You'd be surprised to know: Kim is terrified of public speaking.
Biggest Dream: To have a copy of her book in every public library.