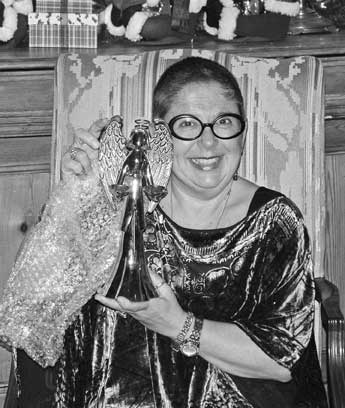 Sometimes in life you meet a special person who leaves a lasting impression. Whether it's a friend who makes you laugh when you're feeling down, a stranger you connect with immediately, or someone who can listen and understand, even if you don't say anything at all. These people are everyday angels, and to many people in the Lowcountry, Kiki Gamilis was one of them.

Kiki moved to Hilton Head in 1993 to be close to her sister, Joanne. She instantly made an impression on her new home. "I had lived here six years, and a week after she moved people were already coming up to me saying, 'Are you Kiki's sister?'" Joanne reminisced. "She just had a way with people, everyone thought she was adorable."

And adorable she was. Standing at a mere 4'11", Kiki truly had a unique style that was all her own. "When Kiki was young she was shy and looked like a little boy: short hair, glasses, braces, a little heavier. As she got older it's like she just got sick of it. She blossomed from a little boy to an exotic bird almost overnight," Joanne said. Kiki's trademarks in fashion were her buzzed haircut, designer eyeglasses and her jewelry. "In a time when skinny and young was in, Kiki knew that would never be her. Instead she created her own beautiful, and it fit her," Joanne said.

Although Kiki shined in her outward appearance, her greatest sparkle was the love she showed to others, and the way others reacted to her. She was an incredible listener and hated to see anyone sad. "Kiki held a lot of hurt and insecurities inside her, but her most remarkable trait was the way she flipped those and made her life about other people," Joanne said. "When people talk about my sister they talk about the way she made them feel. She was like a mirror who reflected beauty and happiness back at whoever she came in contact with."

One way Kiki showed her love to others was by giving away silver "pocket angels" to people who she thought needed a reminder that there was always an angel with them- individuals who were sick, hurting, having a bad day, etc. On one occasion Kiki gave a pocket angel to the mother of a soldier who was going to war, and two years later the mother returned. Debbie Berling, owner of Forsythe Jewelers and Kiki's former boss recalled the scene: "She walked up to Kiki and handed the angel back to her. 'You gave this to my son two years ago when he went to war, and he came back this week without a scratch on him. He told me to return this to you and let you know that he hopes it brings you the same luck it brought for him.' The whole store was practically in tears."

But there was more to Kiki than her sweetness. She had a goofy, almost irreverent sense of humor and plenty of quirky antics. "People always told me what an angel my sister was, but they didn't realize she had a little devil inside her too," Joanne joked. She loved to dance, to travel, she would sit down to knit almost anywhere, even in the middle of a bar curled up with her legs folded so she looked "like a little Buddha" as Joanne described it, and most importantly she loved her family.

In fall of 2009 Kiki was taken to the hospital with a bacterial infection in her brain, a complication from a tumor she had as a child. She quickly won the hearts of the nurses and doctors in the hospital. "Different nurses came in all the time to see her, whether she was their patient or not, just to make her happy. She could hardly speak, but she always found a way to muster up three words, 'fabulous, perfect, and absolutely,'" Joanne recalled.

On October 28, 2009 Kiki died in the hospital at the age of 51. Although her body is gone, her fun spirit and the inspiration she gave to other will never be forgotten. Joanne said, "She gave all those angels away, but I don't think she ever realized that she was truly an angel herself."

Up Close:
Got her Style from: Her grandmother
Famous for: Knitting alligator scarves with life-like eyes
Favorite Travel Destination: Greece!
Story Behind Buzz-cut: She had surgery on her head one time and they had to shave it. She got so many compliments, she decided to keep it super short all the time.
Favorite thing to wear: Jewelry! She put on her jewelry even before she put on her clothes!
Greatest Joy in life: Spending time with her sister
and mother