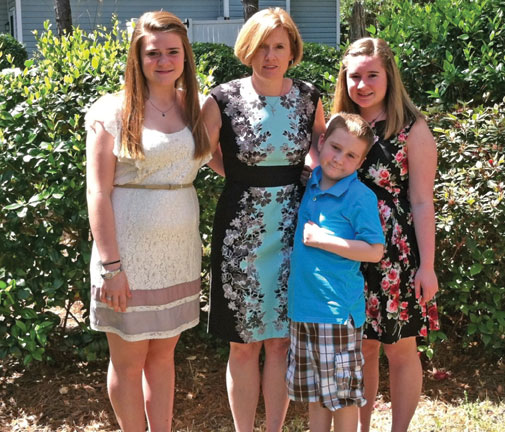 Young Leo came home from school uncharacteristically complaining-his toes hurt. On his mom's advice, the next day, the seven-year old sports enthusiast wore his older, more comfortable shoes to school, but the pain persisted. "By Sunday, Leo was running a fever and could not walk. What was to have been a simple emergency room trip turned into a surreal situation," reflected McCracken eighth grade teacher and Leo's mother, Kelly Vannoni. "After multiple tests and blood work, Leo looked at me and asked, 'Mom, should I be concerned?'  I quickly reassured him the procedures were normal to determine the problem. I thought it might be Lime's disease, so I was totally unprepared when the doctor took me aside and insisted I take Leo to a hospital in Savannah or to the Medical University of South Carolina... immediately, for more in-depth blood studies." recalled Kelly, single mom of three.

"On August 25, Leo was transported by ambulance to MUSC's Pediatric Intensive Care Unit, where it was determined he had acute lymphoblastic leukemia (ALL). Our journey began. I was terrified. It was such a shock. A few days before, he was vigorously enjoying a tennis camp in Bluffton, now horrible invasive tests and chemotherapy loomed over my little one and turned our lives upside down. We were soothed a bit by the wonderful doctors who explained in a very non-threatening way what was happening and what had to be done. Meanwhile, I just told Leo he had something wrong with his blood, and we had to fix it. Leo never questioned, as he trusted and respected us and the expertise of the kind doctors. If he looked at me with uncertainty in his eyes, I'd nod it was o.k., and he never argued.  I opted not to investigate the disease, or compare Leo's case to others, as this was our individual journey."

"Fixing it" over the next few months proved terrifying for Kelly and her two girls, Gillian, 14 and Katie, 17. Leo was given the standard protocol for this type of leukemia, but instead of improving, when the tests were re-run, he was ten percent worse! "It was panic time," Kelly said teary eyed. "They called in Father Bosco to talk with Leo, who grew up attending daily mass at St Francis Catholic Church. I was so frightened, but had to hide it from Leo, yet I knew God was there."

A bone marrow transplant was essential, and finding a match included testing Kelly, Katie and Gillian, the latter who turned out to be the perfect match. "We called Gillian at school so Leo could tell her," said Kelly. Gillian, who had spent countless hours entertaining her little brother offered, "I was very excited it was me that could help him. Then, I was really scared, but hoped in the long run, it would make a difference for him."

After days of preparation and precautions, on November 15, 2012, Gillian lay next to Leo offering him life through the lines that connected their bodies. The transplant went smoothly, then Leo spiked a 104 degree temperature. "We had to put him in a bath every few hours, as they could not give him anything to reduce the temperature," Kelly said. Finally, many a crisis averted, Leo began to turn the corner and begged to go home to see his dog, Fleur.

Gillian continued her vigilance, and one day when Leo was sharing his baseball cards, an unlikely face appeared. "Who is that?" she asked. "Oh, that's Mitt Romney," declared  Leo. "But what team does he play for?" "That's easy," replied Leo confidently pointing to a symbol in the corner. "He plays for the Elephants!"

Family, friends and churches rallied around, offering all forms of support to ease the Vannoni crisis.

Their schools created "fun-raisers" and the Bluffton Fire Department not only raised money, but offered their services to help Kelly in any way she needed it around her home. Kelly's mother, Geri Jardin, who Leo always called "Mine" was, along with many volunteers, a huge help with Leo's care, making it possible for Kelly to return to her teaching career March 1. Leo was included in the "Make A Wish" group, and in September will visit Disney, Sea World, Universal and his favorite, Lego Land. He plans to play basketball, too! Katie and Gillian feel, "Our mom has been able to be so good to all of us throughout this. She is an inspiration and amazing!"

On February 14, Leo was released, and Kelly, who always kept a positive attitude and encouraged her son, even in her exhausted state, thanked God for their blessings. "A miracle happened here." she beamed. "Someone sent a vial of Holy Water. It was my ritual to rub it on Leo every day, as we waited for results after each procedure. Everyone was wonderful. Often I had difficulty accepting the amazing offers. I've learned not to be uncomfortable, but to be thankful for their help, knowing God is working through them. It's been a difficult journey, and we still have hurdles ahead, but we are so very grateful and thank all those who came to our rescue along the way, easing our pathway. God surrounds us, and in this area, it does not matter the church, love is always present."