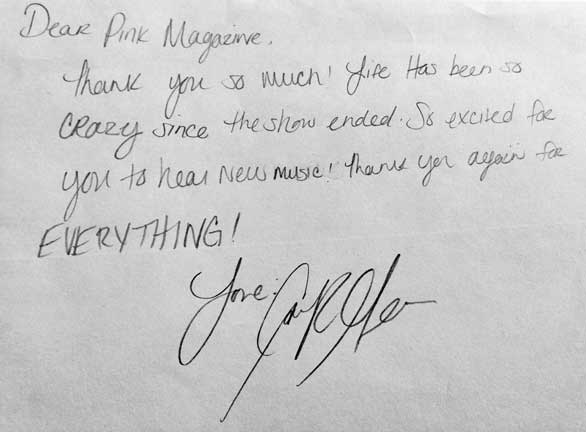 (The following article was run in our 2012 April issue)

Candice Glover sits outside at a wooden table in Waterfront Park behind Plum's restaurant located on Bay Street in historic Beaufort, SC. It is a photo-ready scene with sparkling water, golden afternoon light, and a cloudless blue sky playing backup to this young singer who is already in the spotlight.

You may recognize her as the American Idol contestant from St. Helena who got a standing ovation from Randy, Steven and J. Lo* when she performed Buddy Holly's "Doesn't Matter Anymore" with fellow contestants Jessica Sanchez and Deandre Brackensick. As of this writing those two are in the final ten of the show's 11th season. Inexplicably, Candice was eliminated after that performance.

Candice is striking in a red knit cap, chain and feather earrings, a spiky metal bracelet, jeggings, and a red and black top. She has "the look". I have gone on-line and watched her final performance on American Idol. She has "the voice." But what has kept her on my mind for days is the young woman behind the "interview persona." She is authentic and appealing.  And wise. How does that happen at age 22?

Before she won local talent shows; before she was selected from among thousands to advance on Season 9 of American Idol when she was 18 and again on Season 11 when she was 22; before she went to Hollywood and Las Vegas and was encouraged by some of the biggest vocal stars in America, Candice was a little girl with a big voice who loved to sing. By herself.

"I think I started singing when I was four. I was so shy, my family didn't even know about my voice for years. When no one else was home I would pick up the remote, play the radio as loud as I could and sing. I didn't see a living room. I saw thousands of people reaching up for my hand."
Her family and community discovered her gift when she performed her first solo at church at the age of ten. The audience was awed and gave her a standing ovation. She couldn't quit crying. She started in the wrong key and thought the notes were too high. She is a perfectionist. It has never happened again.

I wonder how she has handled being eliminated twice on American Idol. What becomes clear is this young woman will not quit. She intends to audition for Season 12. "This season wasn't my season. I think it wasn't my time because I need to get more comfortable with who I am and quit trying to be the image of what someone else wants." She paraphrases a Tyler Perry quote, "Sometimes you're supposed to be hidden, under the radar, while you prepare for the spotlight. Everything happens for a reason."  She continues, "I have learned so much during each season and I have made amazing, supportive friends. American Idol is the best thing that ever happened to me. I was disappointed, but it makes me try harder. Next time I'll be bullet proof."

Her maturity and self-awareness are impressive. But the process hasn't been easy. "Growing up I didn't really fit with anyone. I read a lot and just wanted to be alone." Being a straight A student with a serious dream kept her focused and disciplined, but she was lonely. "During my first season on American Idol, Simon [Cowell] was hard on me. He said, 'I don't see a star, I see someone singing in restaurants or bars.' It hurt, but I didn't quit. It made me determined to go home and really work on seeing myself as a star and learning to project that self-image."  Now that she has achieved some success and visibility in the world beyond St. Helena, she has learned that not everyone who knows her is supportive or generous.
These are hard lessons. Her mom encourages her, "You know you have a gift, just never give up. And stay humble." Her grandmother told her a story. Sometimes people are like a bucket of blue crabs, knowing they're about to get cooked. The ones on top have a chance of getting' away, so the ones on the bottom pull on their legs, saying, "If we can't get out, we won't let you out."

It's a hard path, but Candice believes it's the right one. She has a family that loves and supports her. She has faith that God gave her this amazing voice and wants her to use it. She has performed on national TV. She has fans around the world including Indonesia and Baja-which blows her away. This is your possible dream Candice. There are lots of us rooting for you.

Up Close & Personal: Big Supportive Family: Her parents have been married for 24 years; she is the oldest of seven siblings, age 22 to 13. (The youngest five are adopted.) Pre-Performance Jitters: Before every performance she feels like throwing up, passing out, and thinks she'll forget the words. Musical Range: Her tastes include country, gospel, jazz; she had never heard of Buddy Holly before she was assigned his song. Potential Names for future children: son-Malachai Te'nor; daughters-Aria Kalyn or Lyric Marie.