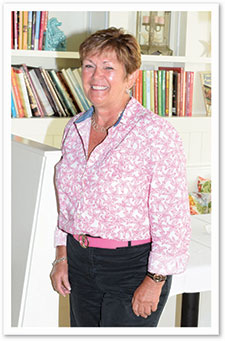 For some people, their life path becomes clear at an early age. That’s what happened for Kathy Watson. The eldest of five children, she grew up in Easton, Md. Her father was a physician with a busy practice and her mother was the domestic engineer, tending to all the details required to handle a household and raise a family. Learning from her parents’ example, Kathy gained some excellent time-management skills that have served her well throughout her school years and career. Her parents strongly encouraged her to be independent, discover what she wanted to do and go after it. And that she did!

Inspired by her social science studies in high school, Kathy was clear that she wanted to become an attorney. She set her education goals and moved forward. She first enrolled in a liberal arts program for pre-law at Franklin and Marshall College in Lancaster, Pa. There she majored in International Relations with a minor in English. She later enrolled in the law school program at Catholic University in Washington, DC.  Kathy was recruited by several large law firms during law school. She interned for one of them after her first year and quickly realized it was not for her. “They wanted your soul, as well as your mind,” she said. The next internship was with the CIA.  She vividly recalled her first day when the General Counsel came into the library, pulled her aside, and assigned her to prepare a legal brief by 5 p.m. regarding the agency’s authority to “render” a terrorist from overseas. She found this assignment fascinating and became “hooked.”

After graduation Kathy landed a prestigious appointment with the CIA. She served in several positions in the Office of the General Counsel, starting as a junior attorney and working her way up. She practiced in a variety of national security law positions, but her favorite was providing legal advice to the Directorate of Operations. Her specialty was covert action which required a Presidential finding, in writing, signed by him, specifying what the CIA is authorized to do.  Her challenge was to clarify the intended covert action, then identify any legal impediments and mitigation strategies, so that it would be consistent with U.S. law.

Kathy later served the Undersecretary of Defense for the Department of Intelligence (USDI) as an attorney for six months. During this short tenure, the Defense Security Service, an agency under the USDI’s purview, ran out of funding and Kathy was assigned to figure out what had happened. Following a grueling month of inquiry, fact finding and preparation for testimony on Capitol Hill, Kathy was asked to assume the position of Director of the Defense Security Service. This was an opportune career move, as well as a challenge. She would no longer be practicing law, but would be responsible for oversight and protection of classified information in the hands of “cleared” U.S. industries.

Kathy began by filling many longtime vacant positions, hired a CFO to handle the finances, appointed a deputy from the CIA leadership and formed a team. Although she got the department back on its feet and fine tuned operations, she began to grow weary of the male dominated political scene at the Pentagon. Even when she wore outfits in shades of hot pink as a gender cue, she was constantly derogatorily being addressed as “Sir.” Throughout her career, Kathy mentored many young women attorneys, teaching them how to communicate with their male counterparts in order to effectively negotiate and flourish in the political environment. Her advice for women is to “stay strong, never give up, and find a mentor early on in your career. Use your brain rather than your female prowess to be successful in the workplace.”

After 4.5 years at the helm, she decided it was time to do something completely different. She resigned from that position and became Director of Government Security for a “cleared” government contractor. Her role there was to ensure that the cleared company complied with guidance from the Defense Security Service.

All the time, Kathy was working in high-profile, high-stress jobs, she was also raising two children as a single parent. Smart time management was absolutely crucial for survival. Once the children were grown, an opportunity presented itself for Kathy to create a more relaxed and nurturing lifestyle. Like many of us, Kathy had vacationed on Hilton Head for many years and fallen in love with the island. She found a way to move here permanently in 2013 and work remotely from home. When her company merged with another company last summer Kathy said the politics became insufferable. She decided it was time to quit and find something to do that she would enjoy here in paradise. She had owned a small catering business several years ago and always loved cooking and entertaining.  After extensive research, Kathy purchased the eclectic, upscale restaurant 843, at the Fresh Market Shoppes. Kathy now delights in her new life chapter—much less stress and more time for the beach!

Family: Daughter, Abby, lives in Boulder Colo. and has a MS Degree in Hydrology; Son Matt lives on Hilton Head Island and attends USCB, and is majoring in business.

For Fun: Cooking and entertaining at home, tennis, biking, kayaking, reading on the beach and watching the Food Network.