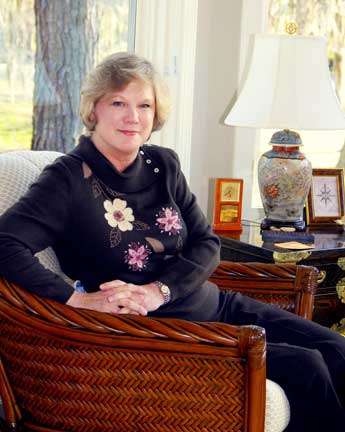 Once inside, the home revealed Asian influences and furnishings, as well as antiques and artwork reflective of its owners' fascinating lives. This household and this interesting, poised woman instantly charmed me. Karen led me to a family room with ceiling-high windows that invited light and the natural surroundings inside, appropriately so because of Karen's love of nature and wildlife.

Her father, H. H. D. "Hei" Heiberg, Jr., was in the Air Force, in part responsible for Karen's nomadic spirit as they lived in exotic locales including the Philippines during her youth. Her dad was one of the first men assigned to the Air Force Academy in 1954. As a brand new school, they needed a representative mascot. They aptly chose the falcon, the world's fastest bird, which often achieves speeds of 200 miles per hour in vertical dives or "stoops," with their wings pinned to their body. So, as a symbol of speed, beauty and aerodynamics, the falcon was a perfect choice for the Air Force mascot.

A young captain at the time, Karen's dad was selected to find a falcon and train it, meanwhile igniting what was to become a life-long passion for this beautiful bird of prey. Karen's dad trained under master falconers, eventually becoming a falconer himself, and Karen learned much about this magnificent raptor through him. Much of the protective legislation and conservation programs for falcons that are in effect today are a result of the work of falconers like Karen's dad. In fact, the Peregrine came off of the endangered list in 1999, once at the brink of extinction from the use of DDT.
Karen explained that today there are numerous urban dwelling Peregrines. Apparently the birds thrive in large cities due to the abundance of prey from pigeons to blue jays. Also, many skyscrapers have ledges that approximate the cliffs on which falcons perch in the wild.

Karen's father, who retired from the Air Force as a Colonel after thirty years, was recently honored on the Archives of Falconry Wall of Remembrance in Boise, Idaho.

Karen's own life has been equally as textured. She met her husband Bob in 1986 in California while attending a management class; he was the instructor. Karen laughed and said, "I hasten to add it was a non-graded class." After a bi-coastal courtship, they were married the next year.

She and Bob -- also a military man, Army specifically -- lived for a while in Saudi Arabia, and several interesting artifacts from her home allude to their former Middle Eastern residency. A colorful falcon hood is one such artifact, once a gift for her dad. A hallway whose walls hold beautiful falcon art graces her home as well. Part of Karen's art collection includes a framed needlepoint of two Gyrfalcons, given from her great aunt to her father.

Hilton Head Island was always a favorite vacation spot for the couple. The plan was to retire on Hilton Head when Karen and Bob moved here last November, but life hasn't slowed down. Part of retirement included leaving her career in D.C. with the National Contract Management Association, where she was president for a term and on the board for eight years. No sooner than she arrived on Hilton Head was she asked to join the association again on a part-time basis, accomplished primarily via computer, but still requiring travel to D.C., and often it "isn't terribly part-time," according to Karen.

But a break in the work is eminent, with a trip to see their two grandchildren in Boston on the itinerary next. Beyond that, the future holds a cruise to the Mediterranean and a trip to Karen's ancestral home of Norway. "Bob loves military and Roman history, so our deal is that I'll visit the ruins with him and he'll go to the castles and stately homes with me," Karen explained.

Travel, wildlife, family, career, art. Karen enjoys a richly woven life, and like the falcon, shows no signs of slowing down.

Born in: Munich, Germany (but of Norwegian descent)
Moved to Hilton Head in: November, 2009
Favorite Way to Relax: I love to read everything - biographies, fiction, newspapers...
All Time Favorite Book: Gone with the Wind
by Margaret Mitchell
On the Weekend, We: Go to the Jazz Corner
Wish I Had More Time To: Play golf!