Finding Good in Something Grim 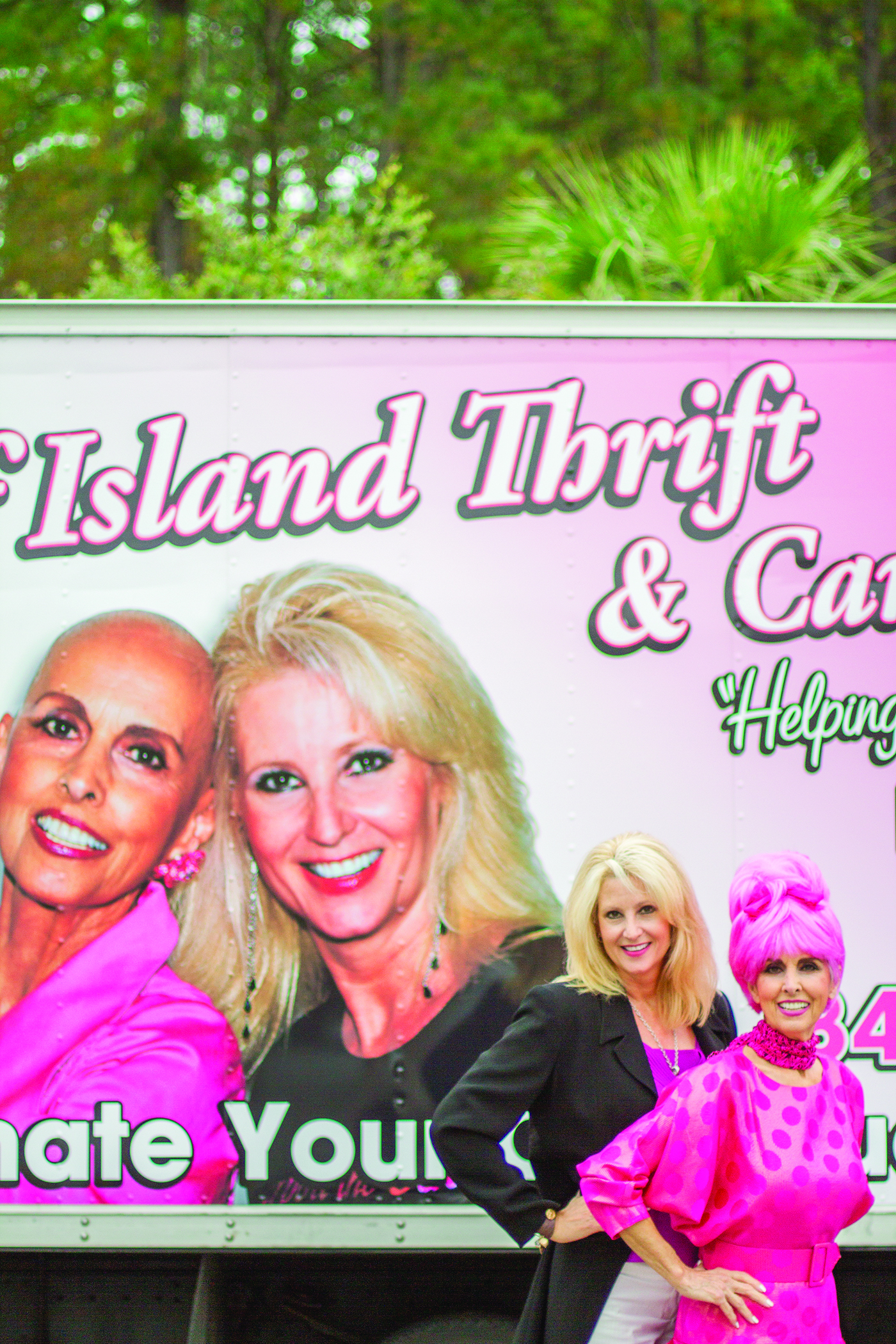 Karen Matthews and Joanna Yarborough make a striking pair of women, even when Joanna is not wearing her elaborate pink wig. Their bigger than life faces can be seen together on both sides of the pink truck that makes pick-ups for the Cancer Awareness Foundation/Off Island Thrift Store throughout Hilton Head, Bluffton and Hardeeville. On one side, Joanna is bald and smiling; on the other she is brunette and smiling, wearing one of the myriad of wigs she has accumulated since losing her hair from multiple chemotherapy treatments.

I was greeted outside by Joanna and Karen at the huge and beautifully merchandised thrift store in Bluffton. I immediately recognized Joanna as the woman always dressed in amazing outfits at the Pink Partinis-and known to many in the extended Hilton Head/Bluffton community as the "Hat Lady"-but I had never met Karen. She is the founder, owner and driving force behind the Cancer Awareness Foundation and the Off Island Thrift Store.

Both women are animated and enthusiastic; they have known each other for years. The conversation is a spinning carousel of personal histories and tidbits (Joanna says, "I'm from Hollywood not Hardeeville), biblical quotes, inspirational messages and plain fun girl talk. I learn that Karen has actually written a pitch for a new reality TV show that features the Off Island Thrift Store as the centerpiece of real life stories, dramas and inspiration. Trying to keep the conversation on a linear track is like trying to catch a run-away train with a butterfly net.

I ask Karen to tell me her story. For seven years, prior to moving to the Lowcountry, she was the caretaker for her father, who was battling cancer. When he died, she decided to use a portion of her inheritance to set up the non-profit Cancer Awareness Foundation, which she did in 1999. She also opened the first Off Island Thrift Store, a 3500 sq. ft. space in Plantation Park. Her goal and official mission statement of the foundation and store is helping those who need it most-in this case, local cancer patients. Both Karen and Joanna simultaneously paraphrase the biblical quote Luke 6:38: "Give and it will be given to you. A good measure, pressed down, shaken together and running over, will be poured into your lap."

Since 1999 the thrift store has expanded from the original space to an astounding 45,000 sq. ft. in their three Bluffton locations. Through the Guardian Angel Program, the foundation is now able to help 35-50 cancer patients per month, who are in treatment and unable to work. The foundation provides cash donations to subsidize living costs and medical bills.  (For more info check their website at www.offislandthrift.com)
Karen has a mission but she is clearly an indefatigable businesswoman. She is on call 24/7; she receives and responds to an average of 550 texts per day and 150 to 250 phone calls. While we talk, the phone tones never quit. Some she has to respond to. She tells me (in between calls) her only relaxation is when she gets home at night and looks forward to her "T&T"-tub and 'tini.

Joanna is the face and persona that personalizes Karen's work and mission. The two met at the Baptist Church in Bluffton 14 years ago.  Joanna introduced herself to Karen-the only other women wearing a hat. "The Hat Lady" is a bit of a legend. Many people know whispers of her Hollywood background, including her marriage to Max Baer, Jr. who played Jethro on The Beverly Hillbillies. What many people don't know is after living the Hollywood high life for years, she became a devout Christian in 1976 and left Hollywood in 1979.

In 2009 Joanna was diagnosed with cancer. Her faith sustained her, but her recent divorce had left her without a support system. By that time, Joanna-the queen of thrift shoppers-had been visiting Karen's thrift store multiple times a week. Only after her diagnosis did Joanna understand the full depth of Karen's personal generosity. Karen enlisted her husband to help with Joanna's yard and home maintenance, while Karen provided emotional and practical support.

I watch the two of them. There is an age gap, but it seems to enhance the appreciation and regard they have for each other. Too often cancer robs people of their sense of who they are. For Karen and Joanna-both beautiful, glamorous women-they have defied cancer and found their identities.  They are a reminder that faith can set you free.

Up Close:
Favorite Karen story: If someone belligerently haggles about her prices, she says, "Look up. That's not sky. This is not a yard sale. That's overhead and it costs."
Favorite Joanna story:  Her thrift shop purchases fill garment racks throughout each room in her house; enough to change clothes morning, noon and night for more years than she can count.
The Guardian Angel Christmas Wish Program is accepting applications for assistance until December 7th. They will be awarding checks to people who are in treatment and unable to work. Checks will be awarded December 16th. Go to www.offislandthrift.com for more info.