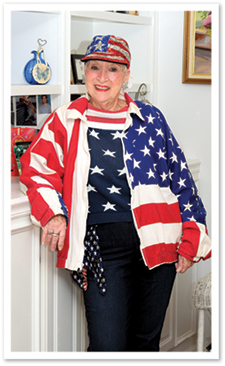 Stars on her sweater and on her ears, but nothing compares to the star she is! A Renaissance gal and New England Patriots Fan of the Year, Karen Hourigan, met me and my golden retriever, Sassie, in her front yard. Immediately electrified, we entered her warm cozy home for three charged hours of fascinating facts about Karen’s star-studded life. Busying herself providing magazines, newspaper clippings and a barrage of New England Patriot photos, the Rhode Island native never sat down the first hour we talked. The mother of four and grandmother of 10, Karen bounced from table to huge memorabilia box, her famous sparkly red, white and blue hat struggling to maintain its spot on her perky, snow white head. Breathlessly, she related her thrilling journey to the title of  “Flag Lady” and winner of New England Patriot’s Fan of the Year award. “It all started with this sweater,” she said as she pointed to the stars. “I retrieved it from a pile of sweaters and thought it was a bit crazy, but it appealed to my patriotism. For fun, I bought it and wore it to the next Pats' game. Subsequently, someone gave me this (laughing, she tipped her glittering hat). People started noticing my patriotic game attire, including Patriots’ owner, Bob Kraft. I hoped it encouraged our team. Once, when he stopped by our seats, he told me he liked my outfit and it would be our good luck outfit!”

Karen collapsed beside me bubbling about her multiple careers—yes-multiple—beginning with her teaching years. From art teacher to head hunter (“My most successful placement was my daughter with Liberty Mutual. She stayed over 25 years!”) to fashion coordinator for T.J.Maxx in Framingham, Mass., “I only had to say it, and it would happen. Guess I was lucky, especially with the unusual fashion shows I managed.” (Sassie and I are more inclined to call it creative talent and positive thinking rather than luck!)

“The T.J.Maxx owner hired me in the complaint department and then asked me to move into coordinating fashion shows for inner city high schools. He felt if we taught seniors how to dress for success and conduct themselves in job interviews, they’d find more work. It was an amazing, rewarding 10-year ride, demanding firmness and patience, dealing with kids who doubted their abilities and chances in the work world. Many called me ‘Mrs H.’  and even though skeptical of the plan and clothes we provided,  most were willing to try. I had many heart-warming success stories. Ultimately, the kids were thankful and amazed over their accomplishments with something as simple as dressing decently,” she said.

Season-ticket holders in the front row of Gillette Stadium, home of the New England Patriots, the Hourigans, with Karen always in her flag attire, cheered on the struggling Pats during all the years before Kraft bought the team in 1994. Karen and Jack, her husband of 52 years, never missed more than three home games in two decades until their move to Bluffton two years ago. “I was so thrilled when Robert bought the team. Once when he was headed into the stadium, I rushed up, introduced myself and declared I hoped he’d do something great with our team. One encounter led to another and soon Robert visited our seats every game and greeted us. His wife, Myra, and I became wonderful friends and we miss her greatly,” Karen said.

A surprised and delighted Karen said she struggled to maintain her composure when presented with the 44-pound, Joseph R. Mastrangelo Memorial Trophy in 2006 as the Bank of America New England Patriot’s Fan of the Year. “It was such an honor, as I’ve always loved this team.”

The amazing Patriots remain a staple in the Hourigan’s lives. They are delirious over their fourth Super Bowl win. Patriots' cheerleaders often wore the star-shaped earrings Karen designed for them and a favorite memento is a photo of Karen sporting three Super Bowl rings on her fingers!” A short loan,” she quipped. Encouraging endearing Karen reflects the words of a well know song, “Here is the best part, you have a head start, when you are among the very young at heart!”

Favorite activity: Walk the beach and talk with Patriot’s fans we spot along the way—a great way to connect!

What she loves best about life now: Recognizing every day is a privilege. Enjoying my children and grandkids.