Venturesome and Then Some 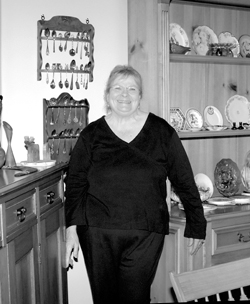 The good old summer road trip has been an American institution for just about as long as we've had motor cars. Anyone who took such family vacations as a kid probably grew up to have an appreciation for travel that will always stay with them.

"By the time I was 10 years old, I had been in all but two of the 50 states," said Juli Yale, whose father's job as an engineering professor required that he go to conventions every summer. "We had a Nash Rambler that made into a bed, so we would just pack up the car and head out."
Juli has clear memories of running down all the stairs of the Washington Monument, driving through the trunks of giant redwood trees in the forests of Oregon, and spending days at a time on Texas highways, where all she could see were cows, telephone poles and tumbleweeds.

But her travel adventures were only just beginning; as an adult she would one day see not just the states, but the world. In 1985, she was at the Los Angeles airport on a little solo getaway, waiting to board a plane to Hawaii. Behind her in line was a man traveling with several lady friends. He said something funny and Juli turned around; not only was the man on her flight to Oahu, and then to Maui, but he ended up staying in a timeshare in her same building.

"We got acquainted and he invited me on a 21-day trip to China," said Juli of the man who is now her husband. "Don loved to travel, just like me."
Since then, the venturesome pair have journeyed all over the world, taking in the sights and sounds of foreign lands that thrill and amaze them. Juli loved the countryside and the numerous happy children of China. Ireland was grand with its rolling green hills, wild yellow blooms of gorse flower and flocks of grazing sheep. In Warsaw, Poland she was treated to a meal prepared by a local family that spent the whole day cooking for her tour group and served up glass after glass of their homemade cherry vodka.

"It's nice to go to museums and cathedrals, but I like to get a real flavor of where I'm traveling," said Juli, who especially appreciates tours that incorporate visits with local families.

Having gone on her share of sea cruises, Juli is now more attracted to river cruises, such as the one she took from Moscow to St. Petersburg, or another that wound its way up great American rivers from New Orleans to Chicago. She has even floated down the Amazon!

Wherever she goes, Juli always manages to find camaraderie with people, often keeping in touch with them years later. Sometimes she even meets up with them again on the opposite side of the world, as she and Don did in Lisbon when they visited a man who had been their favorite waiter on a cruise to French Polynesia. Juli has many "small world" stories like this, and she cherishes all her time abroad. But like many weary wanderers, she is always glad to come home.

"I love to travel and see the world," she said. "I can't imagine not having gone. But we've been through some pretty deprived areas, and it really does make you appreciate what we have here in the States."

Born: St. Paul, Minnesota Career: administrator at UCLA for 30 years Founded: W.E.G.O., the Sun City travel club Hobby: photography Favorite pictures she's taken: windmills in Holland, a sunset in Hawaii, the bridge of the Opera House in Sydney, cypress knees at Magnolia Gardens, and a long row of beer taps at a pub in Ireland Favorite places to visit locally: the squares and riverfront in Savannah, Woodlands Inn in Summerville, Bigelow Tea Plantation and Trader Joe's in Atlanta Next trip: England, Scotland and Wales