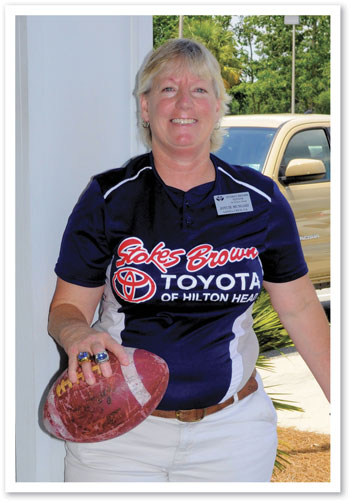 Joyce “Joycie” Mungari—also known as Coach—has proven that the road less traveled was the right one for her. This path was directly influenced by her father when he taught Joyce the game of football at age five and called it a love story. When her parents divorced, Joyce’s father might not have been around, but her love for the great game of American football still coursed through her veins.

Commonly, football isn’t the most loved sport among females, but Joyce didn’t care a bit. She knew it was the right sport for her, creating her dream of becoming a football coach. She leaped into her dream by breaking down the gender barrier, playing for multiple inter-collegiate teams. After graduating from California State University Fresno with a degree in broadcasting, Joyce volunteered as assistant football coach at Cabrillio College. “One day we had a 51-year-old guy come out and play for us as a backup quarterback. I just thought to myself, if he can do this, why can’t I?’ One year later, at age 27, Joyce found herself on the practice squad at Monterey Peninsula College as an outside linebacker. Humbly, it didn’t push her to where she wanted to be; she was searching for the real deal, craving the full experience. In 1995, she became a female player in intercollegiate men’s football. She pursued this one-of-a-kind dream at Contra Costa of the first women in history to play on a men’s college football team. “When opportunity meets preparation, great things can be achieved,” Joyce says. And not only she did achieve great things —she made history! Joyce played as an inside linebacker and started or played in 17 of the 20 games the team played in the next two seasons.

Merriam Webster defines a linebacker as a “defensive football player who makes tackles on running plays. “Joyce tackled her dreams, literally, and continued her love of football in the best way possible: she became a football coach for several high schools and colleges. Living in California, the coaching jobs she was offered were all volunteer work. As much as she enjoyed it, she was looking for a paid coaching position, which she finally found in Bluffton, South Carolina. Joyce has been coaching football in the Lowcountry for 16 years now, earning two state championship rings as special teams’ coach at Hilton Head Preparatory School in 2005 and 2007.

“I don’t believe there is another female in football with same amount of professional accomplishments. I played for two colleges, one semi professional team, and I have coached college and high school football for 23 years. It’s my number one passion; it’s what I love. It’s an opportunity to make a positive impact on a young person’s life, and that is incredibly important. I've learned my gift is coaching line backing and special teams, she said.”

Joyce isn't just an amazing, dedicated football coach. She has also worked in the grocery business for 30 years. She has been with Kroger for 11 of those years working in Bluffton and Hilton Head Island, where she now works in produce. “I have enjoyed being [at Kroger] for the customers. By doing my job, it makes them have a highly satisfying shopping experience.”

Joyce has one more trick up her sleeve: She also works at Stokes Brown Toyota. She has been working there since 2015 as a file clerk. “It is actually fun. I sit there and file while I listen to sports talk radio; it helps me practice to be quiet,” she laughs.  She also keeps busy with her two best friends, Lilabell (named after the ship in The Prince of Tides) and Badger, her two spunky labrador retrievers. “They keep me relaxed and happy. They always look forward to me coming home; they really are the best friends.”

Joyce is a strong role model for her players, as well as a positive influence for all the players she’s coached and for coaches she’s coached alongside. She showed me one of her favorite videos about her career created by Ridgeland-Hardeeville High School’s current Athletic Director, Jeremiah Faber. He said, “Being a female coach, it’s something to get used to for the players, but I like her. She’s attentive to her job, she’s attentive to the kids, she brings a lot of energy, and she loves it!” Jeremiah is spot on when calling Joyce attentive. She pays attention to others, even when she’s stacking apples at Kroger. She faces the apples all in one direction and makes sure they are good quality. She wants the best for her peers, and she stops at nothing to be the best.

Joyce has inspired so many with her pure love of football and people. Her passion gives her the courage needed to face un-chartered territory and find victory. She goes against the grain and wins. She makes the plays, and has the guts to also call them.

One thing for sure: Joyce Mungari truly lives out loud.

Coaching style: “I believe I’m a mixture between Nick Saban and Joel Osteen, but always positive no matter what.”

Riding in Style: Joyce reps her 2018 Toyota Tacoma truck, with the coffee color suiting her perfectly.

Born and Raised: Joyce was born in Santa Cruz, California, where she discovered her love for football by watching Oakland Raider games and playing with her dad.